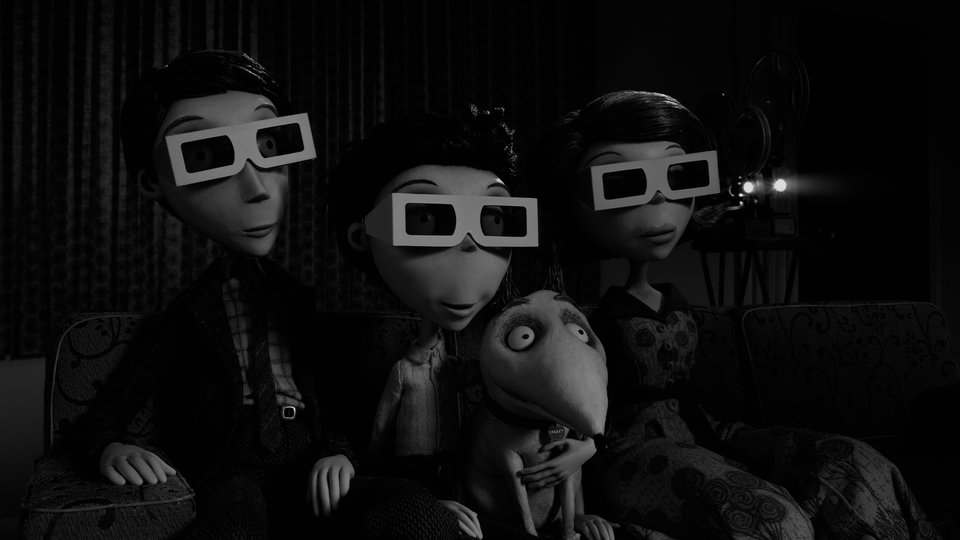 When Victor’s pet dog Sparky is hit by a car, he decides to bring him back to life via a series of experiments powered by lightning. But when the bolt-necked Sparky comes back to life, he begins to wreck havoc on the neighbours. Victor has to convince his family and friends that he is still the same obedient dog as before, rather than the living dead.

Frankenweenie is the full length version of the original 1994 short film by Tim Burton, that he made whilst still working at Disney. Burton’s output have been very poor over recent years so it is surprising to see him plunder his back catalogue to make his new film, however it’s pleasing to report that this firmly put Burton back on track.

It has all the hallmarks that made Burton such a great and individual director, from the kooky storyline to the weird & wonderful secondary characters. We found ourselves laughing quite a lot throughout, especially at the cat called Whiskers, and for the first seventy minutes it is a really good fun Gothic tale (updated for a younger generation).

Then the last twenty minutes go all out crazy, but crazy in a fun way. It’s clear this is the part where Burton had the most fun making but it does leave you a little in awe of the subtlety from earlier in the film.

Claymation films take a long time to make and release, so we never see many outside of Aardman Productions. But Burton is schooled in this style and once again the models look fantastic and clearly have had a lot of time and love put into their creations. When it is done this well we don’t mind waiting a few years before another quality claymation gets released.

Frankenweenie shows that Burton is back to his Gothic best, and whilst this film is primarily aimed at children we feel adults who grew up the old Universal horror films of the 1950’s will love it even more. There is so much to enjoy that it’s alive!