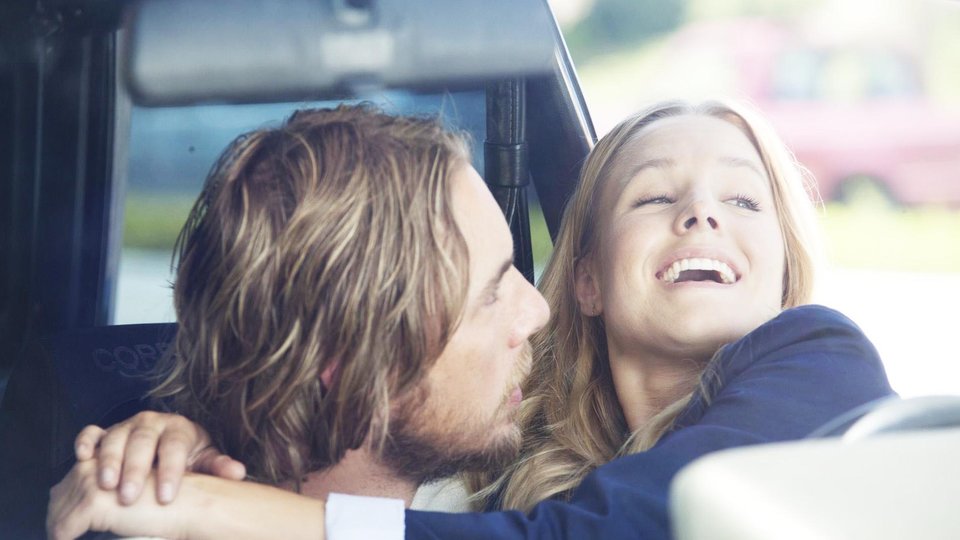 Getaway driver Charlie Bronson (Dax Shepard – Employee Of The Month) is risking everything when he breaches his witness protection program to help deliver his fiancée Annie (Kristen Bell – Forgetting Sarah Marshall) to Los Angeles and grab a once in a lifetime opportunity. Only Charlie didn’t bank on bizarre situations along the way, federal agents chasing them and also unhinged gangster Alex (Bradley Cooper – The A Team) tracking them down for some overdue payback.

Hit And Run is written and directed by Dax Shepard, the occasional rom-com regular who this time goes for his more trademark, straight-up road trip comedy role. Whilst road trip movies are pretty common nowadays this film gives it almost a complete comedy edge. There are a lot of awkward comedy moments throughout and that’s what makes the film a fun watch. It’s more sarcastic styling rather than straight up humour.

Shepard is the main stand-out for all of the funny moments. He certainly knows how to deliver lines in a way that makes them work well in the moment. It’s good to see Shepard be able to spread his wings and he really shows that he has the ability to continue in similar  vein by making this role his own.

The supporting cast all add a respectable weight to the comedy too. Kristen Bell plays Annie with the laid back approach and its hilarious to see her continue to get into the wrong situations. It also helps that she manages to look consistently sexy even when she is in the worst of it. There is even a feel of Patricia Arquette’s character in True Romance running through Annie. Also it’s good to see Tom Arnold get a decent comedy role that he can go really wild at. The last time we enjoyed seeing him was in True Lies and here he gives a similar type of performance as a federal agent chasing the couple.

Hit And Run takes time to develop into a road movie, the first half of the film is very much about setting up the characters and establishing their various premises’, but once we see them get on the road then it turns into a high octane chase movie. The sound of Charlie’s Lincoln Continental is that of a real powerhouse of a muscle car, and it’s one piece of the film when you feel like you are truly involved. With all car chase movies there are crashs etc and this film has its fair share. None are outstanding but all add up to some nice chase sequences.

The problem with Hit And Run is that there’s never options to branch out. It’s a basic story and nothing more, there are side stories that seem to appear but are never followed up and forgotten virtually straight away. Ultimately with no real depth to the story or characters it means the film never delves deeper than it should.

Hit And Run is a fun and straight up car chase movie, so don’t expect anything deeper. You will be rewarded with a True Romance-lite film. It’s more about the interaction between the main leads that make this so watchable. Shepard and Cooper seem to all get the best lines but that adds to the fun. Leave your brain in neutral and enjoy the ride.