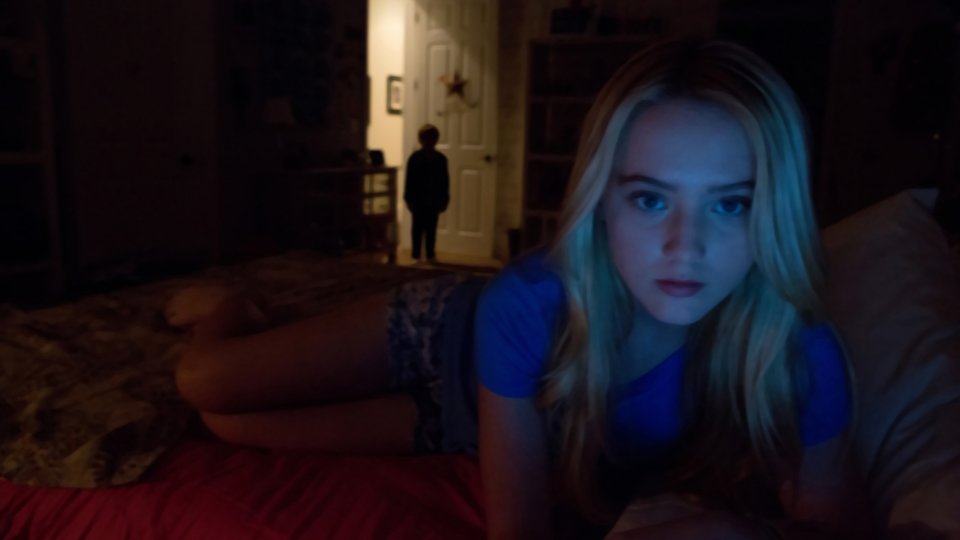 Alice (Kathryn Newton – Bad Teacher) and her family reluctantly take in the neighbour’s only child when his mother has an unexplained accident and goes to hospital. Not really knowing too much about them, Alice thinks this is a bad idea, especially when Robbie (Brady Allen) displays some very erratic and creepy behaviour. Soon, the household starts experiencing some strange noises and disturbances at night so Alice and her boyfriend Alex (Matt Shively -True Jackson, VP) decide to set up their laptop cameras to record what goes on when they are asleep.

The biggest obstacle Paranormal Activity 4 has to overcome is its own success. At times this dices very close to parody – it never takes that final step but the warning signs are there. This is a big problem for the horror genre, let alone the Paranormal Activity franchise. How do you keep this format fresh? Sheer nervous uneasiness (PA1) is now replaced by a knowing audience almost resigned to the fright. There is little the film-makers can do about this – it’s just the sad by-product of a successful formula and the familiarity that it brings.

That’s not to say Paranormal Activity 4 isn’t without merit – it’s actually a very effective horror yarn and does do some things with sparkling ingenuity. PA2 suffered because it practically remade the first film. Having PA3 set in a completely different era gave the story some added interest and the technological limitations of the era made for a quite entertaining ride. PA4 now takes up residence some years after Katie and the baby have disappeared and this gives the film-makers the tantalising opportunity to bring things back to a modern setting.

The scares are still handled very well but at times a little more restraint could have helped. The film implements some truly inventive frights, especially when using the Nintendo Wii and the Xbox – who knew these consoles could be so frightening!? But after a few neat tricks the film then relies too much on them by retreading that ground again and again. This eventually lessens the impact of the initial scare which is a real shame.

Particular highlights of PA4 involve a kitchen knife that plays on the audiences’ foreboding sense of dread and a scary tree house encounter. There are plenty of ghostly figures shooting across the screen and the shock of things popping up on-screen never fails to make you jump. There is also a very nice nod towards The Shining that should get fanboys cheering.

Katie Featherston returns once again as the possessed Katie and steals her handful of scenes. The film really belongs to Kathryn Newton and Matt Shively. Newton in particular is excellent as our heroine and is at the centre of all that’s good with the movie. Shively brings a nice comedic element to the mix and youngster Brady Allen dutifully obliges as the local scary kid.

Paranormal Activity 4 has some jarring moments that certainly leave their mark. The finale is excellent and builds up genuine terror, especially at the very end of the film. The now customary bed scene in Paranormal Activity is chilling and there is a very good use of slow burn tension when Alice is chatting on her laptop and begins to lose connection.

Make sure you stay until the very end of the credits too for a sneak peek at a Latin version of Paranormal Activity that is in production right now. Not quite a sequel or continuation of this story thread, this new movie will instead focus on the catholic belief system around supernatural occurrences. The very brief teaser certainly looks creepy and could be just what the franchise needs to survive past a 5th movie. Written by the scribes behind PA 2 and 3, it’s bound to be just as effective in scaring the living daylights out of us.