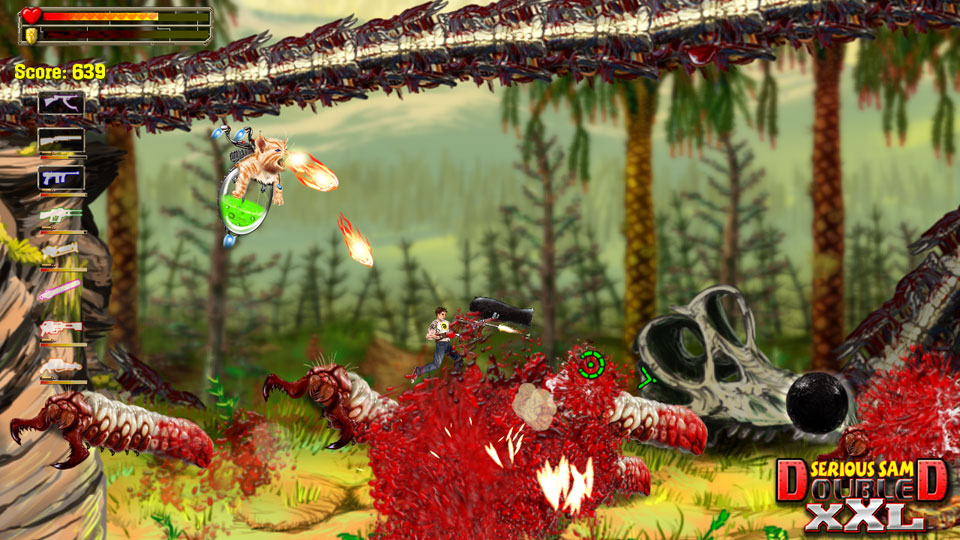 Serious Sam has been entertaining fans since its PC debut in 2001 with Serious Sam: The First Encounter.  As its popularity grew, the game was ported to a variety of different platforms including Xbox, GameCube, PS2 and Xbox Live Arcade.  The last instalment, Serious Sam Double D, was released in 2011 for Windows. Since then an Xbox Live Arcade version has been in development and its finally getting a release this week, nearly 18 months after the Windows version.

Serious Sam DD XXL is a 2D side-scrolling shoot-em-up game that’s packed with action, gore and mindless violence; not that that’s a bad thing. For this new Xbox Live Arcade version the game has been significantly expanded offering more guns and plenty of new gun upgrades. Serious Sam DD XXL is all about guns and gamers won’t be disappointed with the wide variety of them on offer. The real hook of the game is the stacking system that allows you to connect guns (and a chainsaw) together to increase the amount of damage you can do when attacked by multiple enemies.

A new feature for this version is the inclusion of a shopkeeper whom you encounter throughout the levels. You get the opportunity to upgrade your weapons using the money you collect as you battle your way through enemies. The upgrades are varied and do help you progress through the game and maximise the amount of damage you can inflict. Other upgrades include an air buffer that allows you to sail through the air whilst you shoot and another that slows down enemies giving you chance to deal with the hordes. The upgrades are surprisingly configurable and you can switch them on and off when you want. It’s worth experimenting as different upgrades make it easier to defeat different enemies.

During every level it’s worth exploring every nook and cranny as there’s plenty of hidden passages and secret areas to be found. These often lead to collectable items and aren’t very obvious. The best thing to do is try to run through any and every wall you encounter. You also have to creatively think how to use your enemies as often their dead bodies will help you get from A to B. Once you shoot them they begin to stack and you can use them as platforms to get to hard-to-reach areas.

There’s a co-op mode which is probably the most fun way to play the game. Playing with someone else makes it more enjoyable to fire through the hordes of enemies.

Visually the game is almost cartoon-like and it retains the look-and-feel of the previous Serious Sam games.  There’s nothing particularly mind-blowing about the graphics but it’s a decent effort that fits the overall tongue-in-cheek feel of the game.

Essentially Serious Sam DD XXL is a twisted platformer where you battle through hordes of grotesque enemies. The simplicity of the gameplay is part of the game’s beauty but it’s also one of its downfalls. The levels soon feel repetitive and despite the change of environments you feel like you’re playing the same level over and over. The game really lacks in variety and we soon tired of the endless button-mashing required to progress through the game. That having been said, if a mindless shooter is what you enjoy then you’ll find plenty to sink your teeth into with Serious Sam DD XXL. We prefer our games with a little more depth that require a lot more thinking.