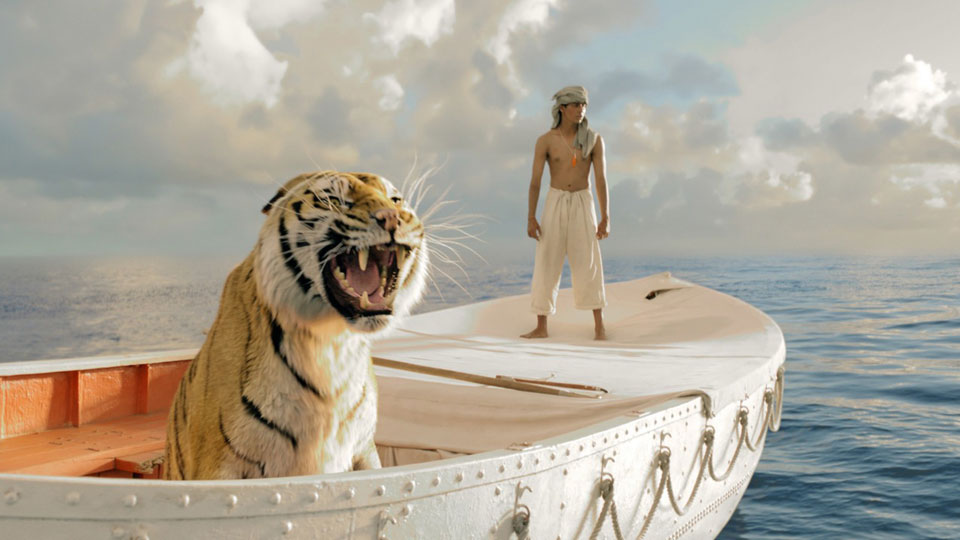 Pi Patel (Irrfan Khan – The Amazing Spider-Man) tells an eager novelist (Rafe Spall – Prometheus) a magical story as he recounts his youth. A young Pi Patel (Suraj Sharma) was a curious child who was interested in all types of faith and religion. His family owned a zoo in India and he was fascinated by all the animals in their care. One day his father decides to sell the family zoo and move them all to another country. On leaving India, the ship they are travelling in hits a storm and is ravaged by the sea. Pi manages to escape in a lifeboat that also houses a zebra, a hyena, an orangutan and a tiger. And so begins Pi’s fantastical journey of life, faith, despair and hope.

Life Of Pi, the award winning novel from Yann Martel was deemed un-filmable by anyone familiar with its amazing story. But true to the central theme of the book, Life Of Pi needed a visionary director with true faith – someone who could navigate the choppy waters of this amazing story and paint a visual masterpiece that could stand toe to toe with the prose. In Oscar-winner Ang Lee, Life Of Pi found the perfect cinematic storyteller to tell this mesmerising tale of adventure, hope, despair and triumph.

Life Of Pi is a true treat for the senses, a movie that challenges your perceptions as an audience by offering you two distinct paths. Which one you choose depends on your approach and this is where the books’ main theme of faith is beautifully kept. This is a movie that will challenge what you have seen in both a rational and fantastical way. At no point does Life Of Pi dance with convention. You may see similarities with films like Castaway but ultimately, Life Of Pi possesses that very rare thing – an original story.

The film takes you on a magical and tragic journey that will leave you emotionally shattered and gleefully happy. You will be invested from the first minute through to the last thanks to a captivating script that always plays to its strengths and a story of survival we can all aspire towards.

Then there are the special effects. With so many blockbusters relying on shoddy CGI to do the heavy lifting it’s refreshing to see Life Of Pi adopt the complete opposite approach. There are lots of CGI moments in the movie but you’ll be hard pressed to spot the majority of them. The Tiger effects are nothing short of breathtaking and will leave you petrified and excited. The effects during a flying fish onslaught are outstanding and the island of animals is mesmerising, especially in its vibrant use of colour.

The cast are all superb with the character of Pi Patel beautifully constructed by both Irrfan Khan as the narrator (and adult Pi) and Suraj Sharma as the precocious, youthful Pi. For every fantastical element of this story, Sharma showcases a true everyman understanding of the situation at hand. He is easy to champion and makes the film flow beautifully. This is then brought home in a poignant and bittersweet way by Khan. Both do an exceptional job here. Special mention also needs to go to Adil Hussain as Pi’s wise father and Rafe Spall as a willing novelist looking to adapt Pi’s story.

Life affirming and exhilarating in equal measure, Life Of Pi ends 2012 on a spectacular high. It’s rare to get such a lavish blockbuster that concentrates on storytelling and uses special effects to enhance the viewing experience, not define it. Ang Lee has crafted a visual delight and with the beguiling structure of Yann Martel’s book as its backbone,Life Of Pi is easily one of the cinematic highlights of the year. This cannot be missed.