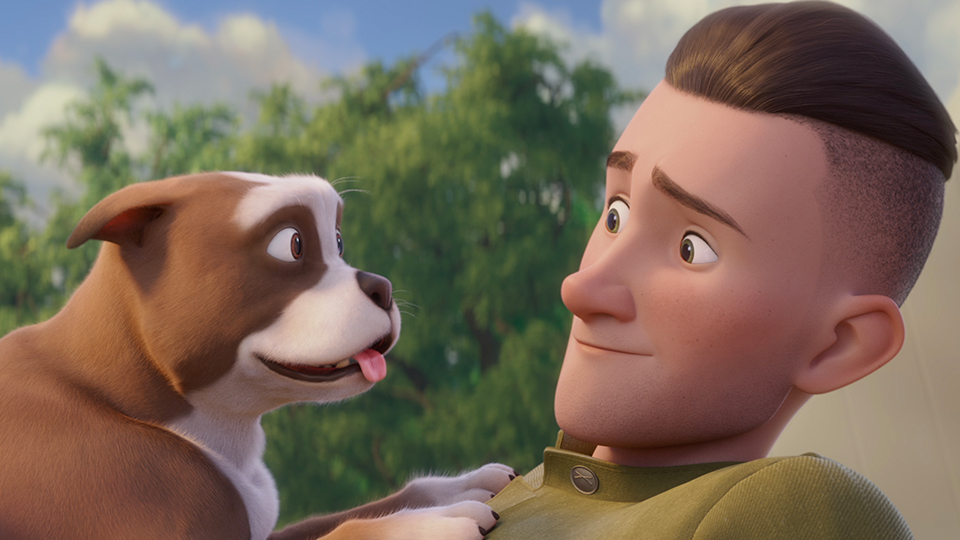 On the brink of World War I, US Army doughboy Robert Conroy (Logan Lerman) attracts the attention of a stray dog during a parade. Quickly bonding with the dog, whom he names Stubby, Robert tries to keep him a secret worried that he will be forced to give him up. Stubby has other ideas and soon ingratiates himself with the army men training at the camp where Robert lives. When Robert is called to go to war, he is forced to leave Stubby behind but the clever dog tracks him down and heads to the trenches of France with him.

Sgt. Stubby: An Unlikely Hero is based on the true story of the real Sergeant Stubby who served in the 102nd Infantry Regiment, 26th Division in 1918. For the big screen adaptation of Stubby’s time in the army, the story has been slightly embellished but it captures the awe-inspiring journey of the little dog who proved to be a very valuable asset. The film is a celebration of the bond between man and dog, and it shows the extraordinary relationship they can form. Be warned, the film will also make you feel every single emotion!

From the moment Stubby appears on screen, I was captivated by this wonderful animated movie. The dog is given so much personality that you quickly start to think of him as an equal to the human characters. He wins over Robert fairly easily and some of the film’s sweetest moments are when Stubby is training alongside the men on the parade grounds of Yale University. Even the sceptics in Robert’s squad, eventually fall for Stubby’s charms, especially once they realise how valuable he is on their arrival in France.

Another aspect of the film I liked was the relationship Robert forms with Gaston Baptiste (Gérard Depardieu). Gaston becomes an ally for both Robert and Stubby, and it’s a joy to watch their friendship unfold on screen. Depardieu gives a very lively performance too, injecting plenty of gusto into the character.

Helena Bonham Carter narrates the film as Robert’s sister Margaret Conroy and she guides you through the story of what happened. Logan Lerman does a superb job voicing Robert and he makes the character very charismatic and endearing. You really root for him, and of course Stubby, throughout the film.

Sgt. Stubby: An Unlikely Hero is an absolutely fantastic movie. Not only does it educate children about WW1, it’s also a celebration of man’s best friend. It’s remarkable to think that Stubby was real and I found the story incredibly inspiring. It’s refreshing to see an animated film that is based within reality and it’s sure to connect with the family audience. The film is full of heart and surprisingly emotive. I laughed, cried and found myself on the edge of my seat throughout, and by the time the credits rolled I was head over heels for Sgt. Stubby.