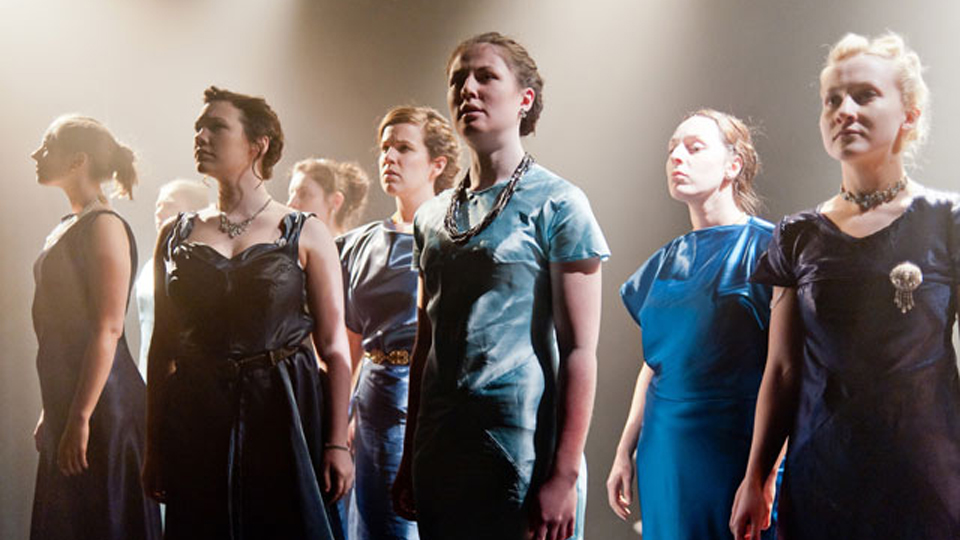 The Lazarus Theatre Company’s latest production is an all-female telling of The Women of Troy which is closely based on Euripides’ Ancient Greek tragedy. Effectively staged in the dark, comfortable and intimate Blue Elephant Theatre in Camberwell, it’s a faithful adaptation of a story about the fate of the surviving wives and daughters of a defeated side in war. It resonates with modern audiences as sides vanquished in conflicts lose their homes and identities all over the world now as much as any other time in human history, with women and children always the collateral damage. The focus is usually on the deaths and the achievements of the male militia. This story is a significant change of viewpoint to examine the effect warfare has on female survivors.

There’s nothing naturalistic about Euripidean dialogue, and director Ricky Dukes wisely confronts this by presenting a stylised and stylish show. The opening synchronised guttural cries of the large ensemble of women is an effective way of setting the scene, and limited mood lighting and frequent sound effects create and sustain an atmosphere of oppression and gloom. That’s not to say The Women of Troy isn’t beautifully staged and aesthetically appealing – indeed the compositions of the backlit actors were at times like paintings, and Dukes even picks out moments of humour and compassion. Choruses of chanting and singing are further useful devices in crafting something emotionally moving out of the artifice of the dramatic style.

The ten-year Trojan War is finally over, and the Greeks have utterly defeated the Trojans, whose King Priam and noblest warrior Hector lie dead. The Greeks have reclaimed the beautiful Helen, snatched away from her husband to Troy by the feckless young Paris, which was the act of war that started the hostilities between the nations. The events of the play take place in the immediate aftermath as Troy lies burning, and see the Trojan women gathering together to learn their fates. Priam’s widow Queen Hecuba is a strong woman, and tries to offer courage and hope. But behind the scenes they are powerless to prevent the victorious Greeks from treating them with as much hostility as they like, where even a queen is afforded no dignity.

The Women of Troy has a talented ensemble of young actors. Alice Brown is steady, noble and assured as Hecuba, forced to maintain a public display of calm even when she is given the most distressing news, and her rock solid central performance binds the cast together. Kerrian Burton marks her professional debut with an enjoyably ditzy, deranged and strikingly modern take on the ill-fated Cassandra whose prophecies nobody believes.

It proves something of a masterstroke by Dukes to exclude the enemy from his version of The Women of Troy. Events happening off stage with messengers bringing news keeps the focus entirely on the women and leaves the invaders as an unseen force, occasionally heralded by an unnerving claxon. Such unflinching focus makes for at times unbearably tense drama. There’s a dramatic high point when Helen, one of the biggest trouble makers in human history, argues about whose fault the death and destruction has been with Hecuba. It’s staged as a cat and mouse hunt between a forest of bodies as the two women, with more in common than either would admit, face off against each other.

Overall, The Women of Troy is a strongly-conceived vision of a classic Greek tragedy told in a stylish and modern way. It’s highly imaginative in its use of lighting and sound effects which bolster the excellent performances. At eighty minutes’ duration with no interval, it proves an intense and enjoyable piece of theatre whose appeal should stretch beyond the keen classicist to anyone who enjoys a meshing of Ancient and modern stage techniques, and a timeless story.