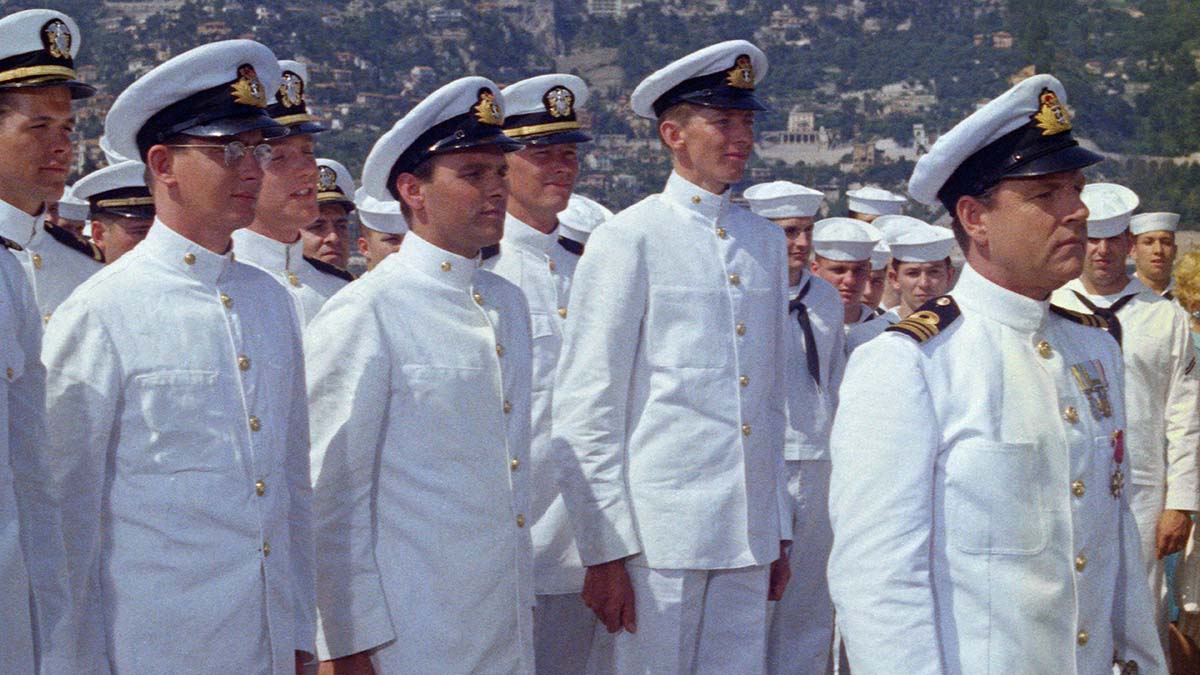 ‘We Joined the Navy’ is a charming 1962 film directed by Wendy Toye. It stars Kenneth More (‘A Night to Remember’) as a serious senior naval officer in charge of several excitable young midshipmen. When they accompany an American fleet to a country in the midst of revolution, the two Western nations must learn to work together to find a way out of an increasingly tricky situation.

The light comedy is shot with a deftness of touch, with director Wendy Toye and cinematographer Otto Heller combining effectively. The most remarkable aspect of it is the stellar cast, and the film provides starring roles for up-and-coming young talent. Dinsdale Landen is impressive as the impetuous midshipman Bowles, and Derek Fowlds (‘Yes, Minister’) is a lot of fun to watch as his bookish colleague. Jeremy Lloyd, later much more famous and successful as the co-writer of much-loved British sitcoms including ‘Are You Being Served?’ and ‘Allo, ‘Allo!’ plays the other upper-class midshipman. Their chemistry is excellent, and their rivalry with the young American officers is a hook to keep the story moving.

Keen-eyed viewers will spot many a household name in small parts. The late David Warner is painting the side of a ship when Derek Fowlds attempts to escape from an excitable Doberman that has taken against him. Rodney Bewes fleetingly appears as a potential naval recruit. Laurence Naismith (later the Judge who allocated missions in ‘The Persuaders!’) is an Admiral. Kenneth Griffith, the larger-than-life yet always eminently watchable Welsh character actor plays a political revolutionary. ‘Carry On’ star Sid James persuades the young naval recruits to join hands as he provides dance lessons. Most amusingly of all, Dirk Bogarde makes an uncredited appearance as ‘Dr Simon Sparrow’, the character he played in the various ‘Doctor’ movies he starred in a decade earlier. There are knowing looks between the characters, the in-joke being that Kenneth More had appeared alongside Bogarde in ‘Doctor in the House’ in 1954.

Although Kenneth More was a fine actor, he excelled at playing straight-laced, stiff-upper-lip English gentlemen types. He wasn’t especially adept at light comedy. In ‘We Joined the Navy’, he is paired against American actor Lloyd Nolan, who has a much better feel for the light and flippant humour in the script. As a consequence, the star comes across as regrettably dull and worthy, and a number of funny moments don’t quite pay off. The other central problem with the film is that a lot of action is implied rather than realised for reasons of budgetary restraint. For example, we don’t see Derek Fowlds crash a sailing boat into the warship. We hear a sound effect and then see him floating in the water. That approach was acceptable for television drama at the time, but cinema audiences feel cheated by such sleights-of-hand.

Despite a few misgivings, ‘We Joined the Navy’ is a thoroughly watchable and entertaining film. It is especially effective when the trio of Dinsdale Landen, Derek Fowlds and Jeremy Lloyd are sharing the screen. An unconvincing romance between Kenneth More and Joan O’Brien is a less-satisfying throughline upon which the plot is hung. But the overall pleasure in watching ‘We Joined the Navy’ is in selected sequences, rather than as a coherent whole.

Fans of director Wendy Toye’s work will enjoy a half hour short film on the extra features called ‘The King’s Breakfast’. Set to music, the actors in a fairytale setting and pantomime-style castle sets perform a comic routine. Toye clearly had an established repertory company of actors, as many of the same names from ‘We Joined the Navy’ appear alongside veteran actor Maurice Denham in the lead role. Those who enjoy documentaries can also take in a half-hour contemporary discussion about Toye’s place as a pioneering female director. Pamela Hutchinson and Jo Botting discuss Toye’s influence. Finally, an hour-long ‘Visions’ documentary from the 1980s looks at the work of Wendy Toye and Sally Potter.