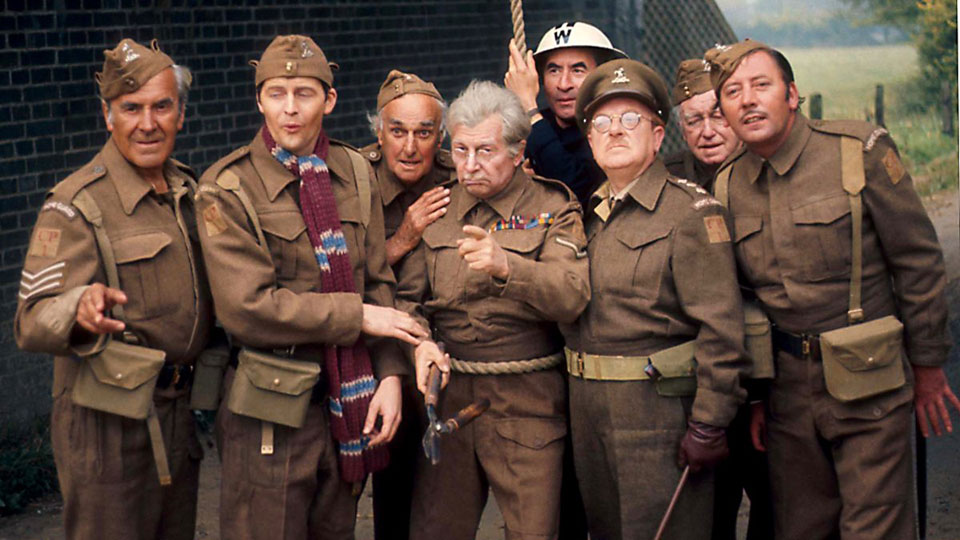 With the new Dad’s Army movie from Universal Pictures hitting cinema screens in the UK lately, we thought it was a good time to remember the original ensemble cast who solidified the amazing characters in the nation’s consciousness in the first place.

The brainchild of David Croft and Jimmy Perry, Dad’s Army became one of the most affectionately considered programmes in British television history. The nation took the shenanigans of Walmington-on-sea’s Home Guard to its heart, and it remains warm comfort-viewing for people across all age ranges. Yet the show, which started to be made only just over two decades after the end of WWII, could easily have been considered bad taste for making light of a dark time in British history which cost the nation dearly in the lives of young soldiers and countless civilians, with years of hardship that followed. Yet the misadventures of Mainwaring’s Home Guard platoon helped Britain to heal its war wounds and learn again to laugh at itself.

As well as Croft and Perry’s ingenious scripts, a large part of the success of Dad’s Army lay in the fine ensemble cast – probably the best ever assembled for a sitcom. Rarely has there been a better company of actors who have all been given their moments to shine and bring the best out of the consistently good and funny scripts.

Lowe played Captain Mainwaring, the leader of the platoon. A pompous authoritarian, Mainwaring was nevertheless loveable because he was unstintingly brave and would have gladly laid down his life to protect his men. Lowe was one of the finest comedy character actors of his generation, and a favourite of director Lindsay Anderson’s. Look out for him in This Sporting Life finding ingenious ways to inject comedy into the bleakest of kitchen sink dramas. Lowe’s slapstick trademark was to emerge from a scuffle with his spectacles askew. Mainwaring is played by Toby Jones in the new film.

Le Mesurier played Sergeant Wilson, the tall, smooth, sophisticated and upper class right-hand man to Mainwaring. Despite Wilson’s mild manners, Mainwaring could never shake off the inferiority complex of being far less cultured than his staff sergeant. There’s more than a hint that Wilson is in fact the father of Private Pike… Le Mesurier brought his refined, handsome, silver-haired presence to countless British films and television series. Although a heavy drinker, and in fact rarely sober during the filming of Dad’s Army, Le Mesurier’s professionalism ensured that his private vice never affected his work. Wilson is played by Bill Nighy in the movie.

It was a sad day when Clive Dunn died a few years ago, since he had been such a great ambassador for the show and had lived a long and fulfilling life. Dunn specialised in playing characters older than his years (he would go on to star in Grandad for children’s television). Although one of the youngest cast members, Dunn’s Lance-Corporal Jones was meant to be the oldest and most decrepit member of Mainwaring’s platoon, having fought in the Sudan and the Boer War before even WWI! Although Jones was in his late 80s, Dunn at the time of filming was in his late 40s or early 50s. The loveable butcher had many of the best catchphrases, including “Don’t panic”, “Permission to speak, sir”, and, best of all, “They don’t like it up ’em”. Off stage, Dunn’s left-wing politics often brought him into conflict with the conservative Arthur Lowe. He distinguished himself as a painter during his retirement in Portugal. Jonesie will be played by Tom Courtenay in the movie.

A genuine Victorian, John Laurie, who was the second oldest cast member, was a renowned Scottish character actor long before he took on the part of Private James Frazer. A regular performer at the Old Vic Theatre, Laurie had caught the attention of Laurence Olivier and he appears in all three of his big-budget Shakespeare adaptation movies. The dour, wild-eyed Scotsman brought a touch of cynicism to Frazer, but the character also adored telling the platoon scary stories. “We’re doomed. DOOMED!” was his catchphrase, and he wasn’t above trying to usurp or at least show up Captain Mainwaring. The part is kept warm by another Scotsman, Bill Paterson, in the new movie.

Although the second youngest member of Mainwaring’s platoon, and the second youngest ensemble actor in real life, James Beck was the first to die, checking out in 1973 at the height of the series’ success. A huge hit as the loveable Cockney spiv Walker, Beck had completed location filming for the Season Six episode Things That Go Bump In The Night before his untimely death, aged only 44, from pancreatitis. Walker was written out of the series, and the cast is visibly subdued during The Recruit, the final episode of Season Six, where Walker has left a note to explain his absence. The seventh, eighth and ninth series of Dad’s Army undoubtedly suffer from the hole left by the irreplaceable Beck. The part is played by Daniel Mays in the movie.

Officially the oldest member of the cast, Arnold Ridley also outlived many of his co-stars, surviving until the ripe old age of 88. Ridley’s camp, gentle Private Godfrey was easily the sweetest member of the platoon. Always needing to be excused on account of his malfunctioning elderly bladder, and a conscientious objector during WWI, Private Godfrey was nevertheless an integral part of Mainwaring’s platoon, often bringing his sister Dolly’s possessions in to save the day. Before Dad’s Army, Ridley was best-known as a playwright, though his works are seldom revived now. He is the great-uncle of Daisy Ridley, who plays a leading role in the new Star Wars movie. His part is played by Michael Gambon in the movie.

Lavender is the only surviving member of Mainwaring’s platoon (though out of the recurring cast, Frank Williams [b. 1931] who played Reverend Farthing is still with us too). He played the childish and wet Private Pike – the “stupid boy” of Mainwaring’s ire. The lifelong Aston Villa supporter added the distinctive claret and blue scarf to young Pike’s characterisation. Pike is widely regarded to be Sergeant Wilson’s illegitimate son, though this was never made explicit. The part is played by Blake Harrison in the movie.

David Croft sadly died in 2011 aged 89, but co-creator of the series Jimmy Perry, born in 1923, is still with us at the ripe old age of 92. He is credited as an executive producer on the new movie.

How do you think the original series and the 2016 movie measure up?

Check out the famous scene featuring Philip Madoc (1934-2012) as the U-boat captain below.

Watch the trailer for the new Dad’s Army movie.