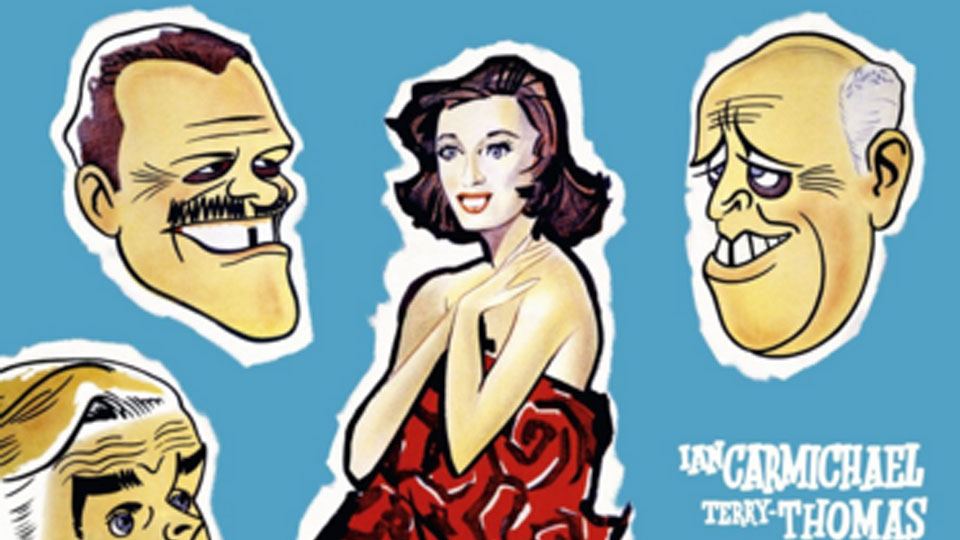 School for Scoundrels is one of the great British comedies. It was released in 1960, and it features Ian Carmichael, the archetypal English everyman who carved a career playing affable and slightly ineffectual chaps, in familiar guise as Henry Palfrey, a man who isn’t taken seriously at work and finds it difficult to attract and keep girlfriends.

Palfrey seeks help from the mysterious Dr Potter (the wonderful Alistair Sim), the leader of the School of Lifemanship, who trains him up to be able to outwit his opponents.  In flashback, Palfrey recalls his humiliation at the hands of his rival Raymond Delauney (Terry-Thomas), who is trying to steal away April Smith (Janette Scott) with his flash sports car, winning manner and knowledge of French cuisine. When Delauney thrashes Palfrey at a tennis match, Palfrey starts to fight back, with guidance from Potter.

School for Scoundrels is a British comedy of manners with a love story at the heart of it, but the film also comments about how being too nice will leave you being trampled underfoot. It brings the best out of a remarkable cast. Ian Carmichael is at the peak of his career, and is very good at playing the switch from ineffectual to cool and charming. Terry-Thomas probably has the best role of his career, playing one of a long line of his caddish upper-class types. Even in his later years, Alastair Sim’s abilities at sardonic humour are undiminished, and his incredible face with crooked smile and twinkling eyes remains readily recognisable four decades after his death.

There are supporting roles for many great British performers of the era. John Le Mesurier (Dad’s Army) plays a surly and snooty head waiter; Hattie Jacques plays one of Sim’s instructors, whilst Carmichael appears on screen with the actor who would be Jeeves to his Wooster – Dennis Price – when Palfrey is sold an embarrassing car by an unscrupulous salesman and later, after Sim’s training, returns to enact his revenge.

The film, whilst over fifty years of age, still feels fresh and modern, with a fantastic moment later on in which Alistair Sim breaks the fourth wall. It remains funny and touching, with the only criticism being the side-lining of female characters. Janette Scott is very pretty and energetic as April, but her character is only really a prize which Carmichael and Terry-Thomas fight over. More of a balance of the sexes would have made for a stronger film.

This version of the movie looks immaculate in crisp black and white, though owing to its age, the sound quality isn’t as sharp as the picture.

Extras comprise biographer Graham McCann talking about Terry-Thomas, and his surprising decline into poverty in his later years; an interview with Peter Bradshaw (Guardian critic) about the significance of the movie; an interview with Chris Potter (grandson of Stephen Potter, whose books the film is based on); a trailer and a stills gallery.