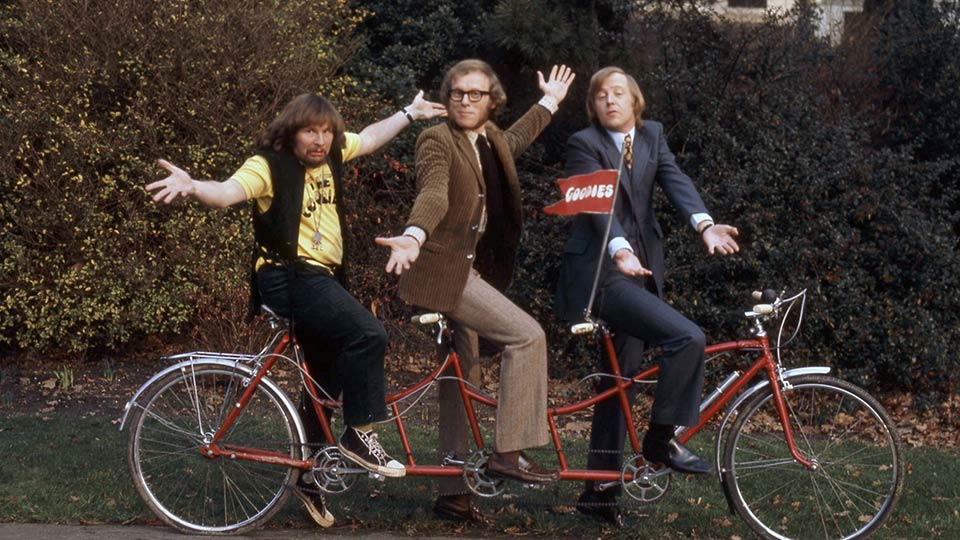 The Goodies is one of the most iconic British television series of all time, and one that ran throughout the 1970s and into the early 1980s. The comedy show made stars of Bill Oddie, Graeme Garden and Tim Brooke-Taylor, who also devised the concept and wrote the scripts and music. Now, for the first time, all 69 episodes made by the BBC (before they headed off to LWT for another couple of years) have been released together – that’s a remarkable 34 hours of classic comedy heaven spread across a dozen discs!

The concept is simple: The Goodies are three men who will do anything, anytime, anyplace, and, as their collective name suggests, usually for the benefit of society. The opening episode broadly establishes why the chaps live together and the eccentric manner in which they seek employment, but after that, you just accept the premise and go with the richly imaginative and usually surreal scenarios they find themselves in. This is not sketch show comedy: each episode stands alone with an overarching story, within which there’s usually a segue into long slapstick sequences overlaid by feelgood 1970s-style folk/rock composed by Bill Oddie.

The world of The Goodies is a magical place to be. The chemistry between the three young men is one of the reasons it’s so special. Graeme Garden is a dispassionate, logical, nerdy type (glasses/leather elbow patches on corduroy jacket); Bill Oddie is a hippy with a strong sense of social justice, often looking for a good time; Tim Brooke-Taylor is a svelte, slightly drippy patriot. The combination works naturally and brilliantly on screen.

High calibre guest actors give you some idea of the strength of the show, and its broad appeal. There are two former Doctor Whos, both playing antagonists – Patrick Troughton as Dr Petal, a nefarious stealer of a nicest person competition (after David Frost had phoned up to nominate himself) and Jon Pertwee as a fire and brimstone-breathing rugby-mad Welsh priest, in an episode that features ‘Mary Whitehouse’ playing the sport as a ‘hooker’. The long-time defender of the nation’s morals is also lampooned in an episode where Beryl Reid plays her in all but name, demanding that The Goodies create a clean and suitable sex education video. Harry H Corbett pops up in an episode that remains topical, playing the head of the struggling, badly-managed and overly-bureaucratic NHS. He persuades The Goodies to get the nation back on its feet. In a reference to his namesake sans ‘H’, Corbett appears with popular bear puppet Sooty on his hand.

There are other episodes where The Goodies notably satirise politically hot topics, especially in the one where Philip Madoc plays a violent and corrupt South African police officer, a couple of decades before the end of apartheid. The Goodies rightly send up the South African government of the time, but in drawing attention to the problem, do so in a way that would trigger SJW types watching today. Context is everything. Nobody able to understand that will be remotely offended by the shenanigans of The Goodies, but the ‘right-on’ brigade would be better advised to stick to shows that help them to polish their halos.

But if you enjoy television from an era prior to the politicisation of comedy, before it was policed by an army of humourless Mary Whitehouse protégées, during halcyon times when everything was ripe for satire, then The Goodies will prove to be the antidote you’ve been longing for. The show is genuinely laugh-out-loud funny, with plenty to amuse in every episode. It maintained a standard of excellence throughout its run and was rightly acclaimed as one of the BBC’s flagship programmes. The 1970s soundtrack, mostly created by Bill Oddie, is a joy in itself, conjuring images of endless summers and innocent pleasures. Within the episodes you’ll find actors of the calibre of John le Mesurier, Joan Sims, Bernard Bresslaw, George Baker and many others. An extra feature on the final disc, a 2018 interview with all three of the Goodies, moderated by Stewart Lee, will prove the icing on the cake for long-time fans. For everyone else, this box set is a chance to relive or discover for the first time one of the funniest and most ingenious comedy shows ever made, anytime, anywhere. You’ll be singing the theme tune to yourself and smiling for weeks afterwards. This boxset of Goodies has been well worth the wait!