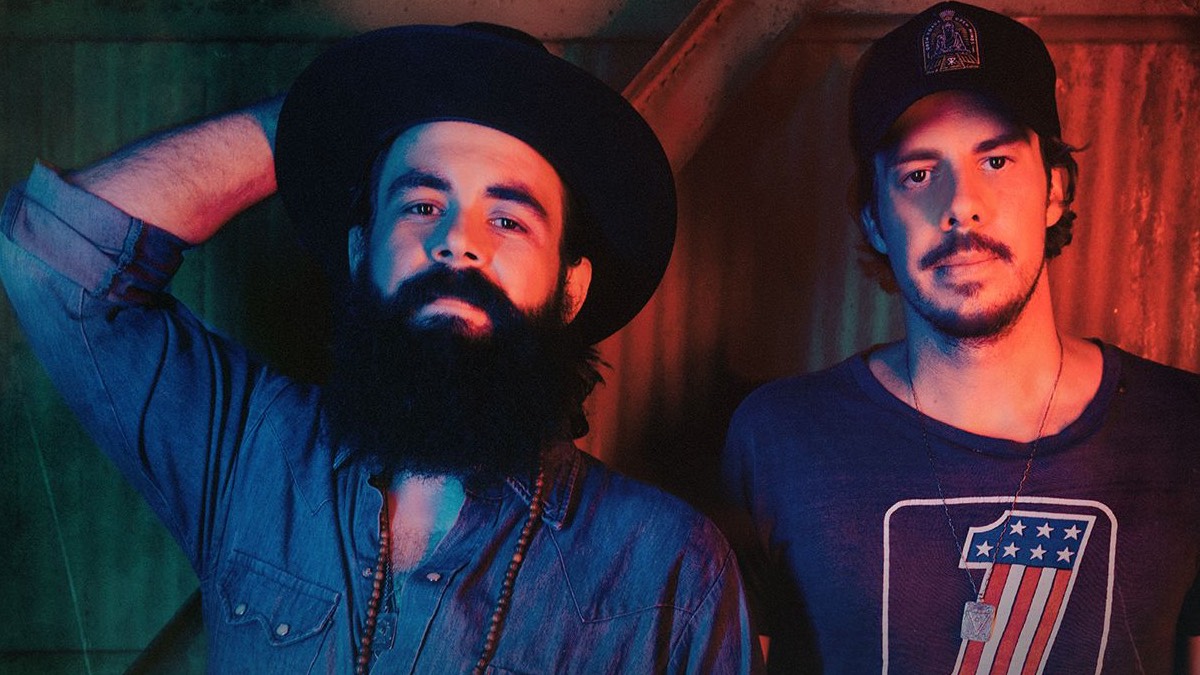 We’ve had the good fortune to speak to rising Country duo Everette twice this year. The first time was when they came to the UK earlier in the year to perform in London at the C2C festival and then we caught up with them again at the Long Road festival in August, where they talked about the amazing year they are having.

Originally from Kentucky, Everette – named after George Clooney’s character in the hit film, ‘O Brother Where Art Thou’ – have been began performing together for 16 years now. They released their debut EP, ‘Slow Roll’, back in 2018 and put out the follow-up album, ‘Kings of the Dairy Queen Parking Lot Side A’, last year. It’s now time for ‘Side B’ and what a great, vibrant and diverse set of songs it is!

‘Kings of the Diary Queen Parking Lot: Side A’ was good. We really enjoyed the nostalgia-driven title track, we loved the raucous bar room grooves of ‘Dang the Whiskey’ and we REALLY loved the weary troubadour vibes of ‘Mamma I’ll Be Okay’ but on ‘Side B’ the guys have taken everything they are good at and ramped it right up to 11. There’s a diversity of sound and a real quality to the songs on ‘Side B’ that makes it such a rewarding and interesting listen.

If you like the more commercial, radio-friendly side of Everette then album opener ‘Run’ is going to be right up your street. ‘Run’ is all mid-tempo moods and chugging guitars. It builds nicely to a slick chorus that has one goal – to make you sing out loud, maybe with your arm hanging out the car door window: it’s that type of song. It reminds me a little of Sugarland and the commercial melodies that they used to create. ‘Gonna Be a Problem’, meanwhile is just as commercial as ‘Run’ but Everette have thrown a little Eric Church kinda vibe onto this track about realising you are falling in love / lust with a girl. ‘Every kiss is a wrecking ball,’ the guys sing on top of an insistent drum beat and a terrific ‘Chief’ style melody.

There are similar Eric Church style touches all over ‘Side B.’ ‘Wild Woman’ channels everything from Lenny Kravitz to Church through to even something like Black Sabbath with its heavy, plodding undertone. It’s a love song imbued with the spirit of the 60s and 70s which will certainly make you sit up and take notice! ‘Make Me Want One’, meanwhile, is a mid-paced, urgent song that explodes into a bigger chorus about desire and about what being around another person can do to you. It also has a real Eric Church-like feel to it , but with that Everette style class and touch that is a feature of their writing across both side A and side B.

Elsewhere there are two really fun songs about having a positive mindset and seeing the glass as half full rather than half empty. ‘Woo Hoo Hoo’ starts in a real funky, almost New Orleans kind of place before settling into a southern rocker with bags of heart and soul. ‘Life’s too short to see your glass half empty,’ they sing in the chorus, ‘It’s a state of mind, it’s all up to you, you can cry, cry, cry or you can woo hoo hoo!’ There’s a cracking John Osborne style guitar outro on this fantastic track too that’ll have you reaching for your air guitars every single time you hear it! ‘Get By’, meanwhile, which closes down ‘Side B’ and this cycle of Everette’s recording career, is a delightful, laid back song about seeing the positive side of life. The song is dripping in sunshine, acoustic strumming and delightful melodies, oh, and there’s an awesome Bluesy guitar in it too. Can’t wait to hear this one live!

If it’s the Blues that you are partial too, look no further than ‘She Got That From Me’. This song goes in an unexpected place in the chorus as the first verse walks you down one path and then the chorus pulls the rug out from underneath you! It’s a clever, relatable song that you’ll end up singalong along to as well. ‘She gave me a new way to see the world, I wish I would have given that girl something better,’ is the line in this song that kills me every time.

Alongside the radio-friendly melodies, the Rock histrionics and Blues-based southern charm sits ‘Black Swan’ outlier, ‘Shunk as Drit’. This track will be the one that probably gets most attention from the likes of the media and fans. It’s a fun, clever Southern singalong in the style of Brad Paisley if he was jamming with Brothers Osborne. There’s a cleverness to the silliness and simplicity of some of the reversed wording of the lyrics here. (just read that song title again and let it sink in if you missed it the first time) It is by no means a novelty song, it’s far too clever for that. It’s a boozy, good-time romp that will go down an absolute storm live and could become the centre-point of Everette’s show in the months and years to come. Genius.

‘Kings of the Dairy Queen Parking Lot’ is now complete. Between the songs on both Side A and Side B Everette have a bonafide, stand-out Country music album under their belts. There’s light and shade on here, heartbreak and humour. There’s radio hits and live foot stompers and there’s genuine Southern charm, wisdom and fun writ large across these two releases: it makes the songs on offer feel more like third or fourth album tracks. You can tell the guys have been at this game for a long time and that experience has paid dividends on this release. We’ve seen Everette twice over here in the UK this year but I’m already excited for them to return and play some of these Side B songs next year too!