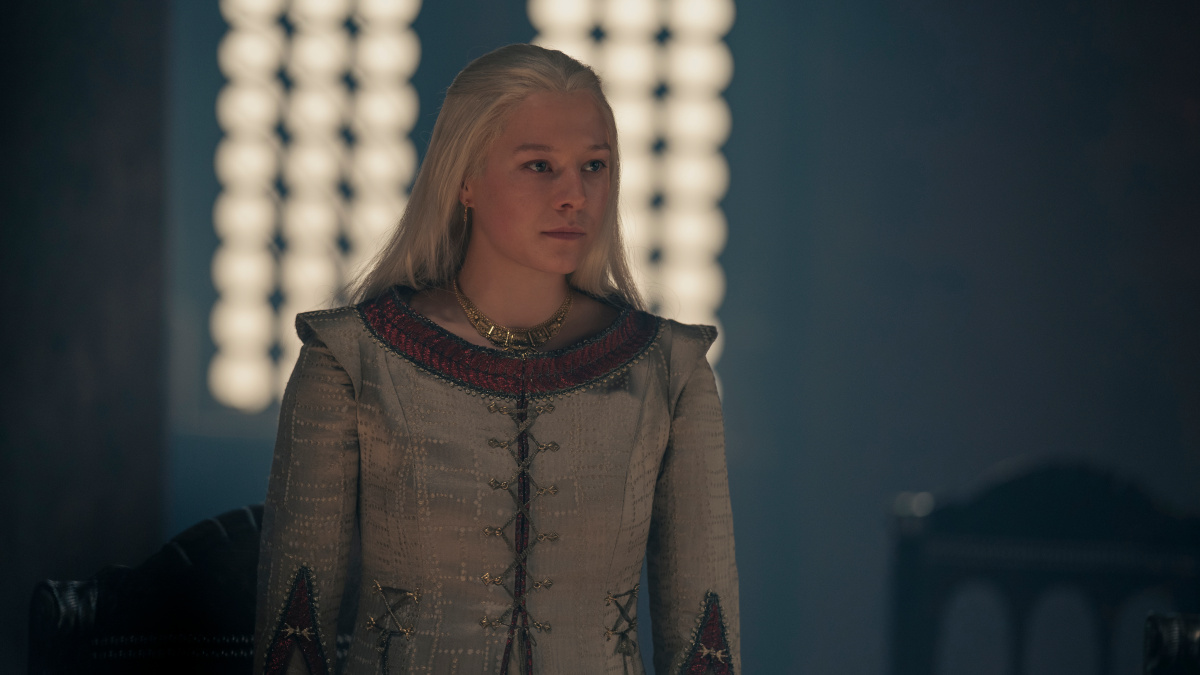 The sixth episode of House of the Dragon jumped forward 10 years. Due to this the roles of Princess Rhaenyra and Queen Alicent are now played by Emma D’Arcy and Olivia Cooke. The role of Laenor is now played by John Macmillan.

The episode opened up with Rhaenyra giving birth to her third son. Seconds after he was born the Queen requested that the baby be brought to her immediately. Against advice Rhaenyra decided to take him herself. On her way Laenor joined her and helped her walk through the keep. She was in pain but forced herself to walk up all the stairs while carrying the baby.

The Queen seemed shocked she had come herself and said she should be resting. A frail but proud Viserys (Paddy Considine) joined them to see his grandson. Laenor announced the baby would be called Joffrey (the same name as his earlier boyfriend). The Queen took Laenor aside and said he could keep trying until they had a child that looked like him.

She went to rest and her other two boys Jacaerys (Leo Hart) and Lucerys (Harvey Sadler) showed her the dragon egg they’d picked for their new brother. Ser Harwin ‘Breakbones’ Strong (Ryan Corr) asked to see the child and it seems he may actually be the real father of her children.

At the dragonpit, Jacaerys practiced commanding his young dragon Vermax. A goat was brought out and he gave the Dracarys command and watched with glee as Vermax roasted it alive. Jacaerys was accompanied by his brother Lucerys and the King’s sons Aegon (Ty Tennant) and Aemond (Leo Ashton). As Aemond is the only child without a dragon, the others decided to play a trick on him and said they had found one for him. They presented him with a dressed up pig!

After the others left laughing, Aemond decided to venture deeper into the dragonpit himself. Due to the darkness he felt his way along the stone walls. He stopped when he came across a large dragon and fled when it began to breathe fire. A guard took him back to the Queen who was spending time with her daughter Helaena (Evie Allen). He was upset about the pig and she promised he’d have a dragon one day.

The Queen went to see the King and complained about the behaviour of the grandchildren. She was also upset that Rhaenyra had three with the same father who she alleged wasn’t Laenor. He told her that the consequences of her allegations would be dire and told her not to speak of it again. She went away and had a rant at Ser Criston (Fabien Frankel) about the situation. It seems he’s no longer a fan of the princess.

Meanwhile, Daemon (Matt Smith) and his second wife Laena Velaryon (Nanna Blondell) took to the skies on their dragons, Caraxes and Vhagar. They were visiting Pentos with their daughters Baela (Shani Smethurst) and Rhaena (Eva Ossei-Gerning). There they were offered a permanent residence along with farms, lands, vineyard and wood in exchange for protection against the rising Triarchy and their new alliance with the Martells of Dorne. Daemon said they would think about the offer. He was keen but Laena wasn’t happy.

At King’s Landing, Criston trained the boys in swordfighting. Aegon was cocky so Criston challenged him and his brother to try and touch him. Harwin suggested that Criston give some of his attention to the younger Velarion children. His reply was to put Jacerys up against Aegon. Being older and stronger, Aegon easily overpowered Jacerys but was surprised when Jacerys came back at him. Aegon resorted to dirty tactics and was then egged on by Criston. Harwin put a stop to the fight and Criston poked fun at him. Harwin turned and attacked, taking his anger out on Criston’s face.

Rhaenyra was informed of the incident and went to see Harwin. She found him getting a telling off by his father Lyonel (Gavin Spokes). He pointed out that his intimacy with Rhaenyra could lead to them being exiled or executed and only Viserys was shielding him. Harwin said it was just rumours by her rivals.

Later, Rhaenyra was disturbed by a drunk Laenor coming back with his latest boyfriend. He spoke of war again in the Stepstones and his ambitions to go to sea, seek adventure and be a knight again. He seemed to hint that he might leave her. She reminded him of their agreement and that dark rumours were swirling. They needed to protect the children so she commanded that he stay in King’s Landing by her side.

At the small council, everyone was frustrated dealing with minor disputes. Everyone but Rhaenyra, who said they should try and deal with them. The new war in the Stepstones was also raised with the blame pointed at Daemon. Rhaenyra said the blame was theirs for not defending it. Everything she suggested seemed to upset the Queen. Rhaenyra then attempted to fix their relationship by first apologising and saying they used to be friends. She then proposed a marriage between Jacerys and Helaena which the King was delighted by. She also said that Aemond could pick a dragon egg of his choosing should Syrax lay some more. Alicent pointed out that Rhaenyra was leaking breast milk and said she and Viserys would consider her offer.

Viserys felt it was a good proposal but Alicent wasn’t happy. She said he could do as he wished when she was cold in her grave. Lyonel came to see Viserys to resign over the behaviour of Harwin. The King tried to change his mind but he insisted. Instead the King refused his resignation and agreed to let him escort his son back to Harrenhal.

The Queen met with Lord Larys (Matthew Needham) for a meal. They spoke of his father trying to resign and how he could no longer give unbiased advice due to his secret relationship with Rhaenyra. She admitted to missing her father Otto (Rhys Ifans). After their meeting he headed to the dungeons where he chose three men who were sentenced to hanging. He offered them mercy in exchange for their tongues.

At Pentos, Lady Laena was in labour but struggling to deliver. Daemon was given the option of the doctor trying to cut out the baby but told that Laena wouldn’t survive. She went outside to see Vhagar and commanded “Dracarys”. Vhagar was upset and at first refused but as Daemon came outside to stop her, Vhagar carried out the command and incinerated Laena and her unborn baby.

At King’s Landing, Harwin said goodbye to the children and Rhaenyra. He promised to return. Rahenyra told Jacerys that they could exchange letters and he asked if Harwin was his father. Rhaenyra told him that he was a Targaryen and that was all that mattered.

In protest, Rhaenyra told Laenor that they were leaving for Dragonstone. She gave him permission to bring his boyfriend.

Lyonel and Harwin left King’s Landing and arrived at Harrenhal. They were followed by the men that Larys had freed. That night a fire broke out, trapping Lyonel and Harwin, leaving them presumed dead.

At the end of the episode, Larys went to see Queen Alicent to inform her that her wish had been carried out – that Lyonel and Harwin were dead. He blamed it on the curse of Harrenhal. She said she hadn’t wished for that but he was sure she would eventually reward him for his actions and said she could bring her father back now.