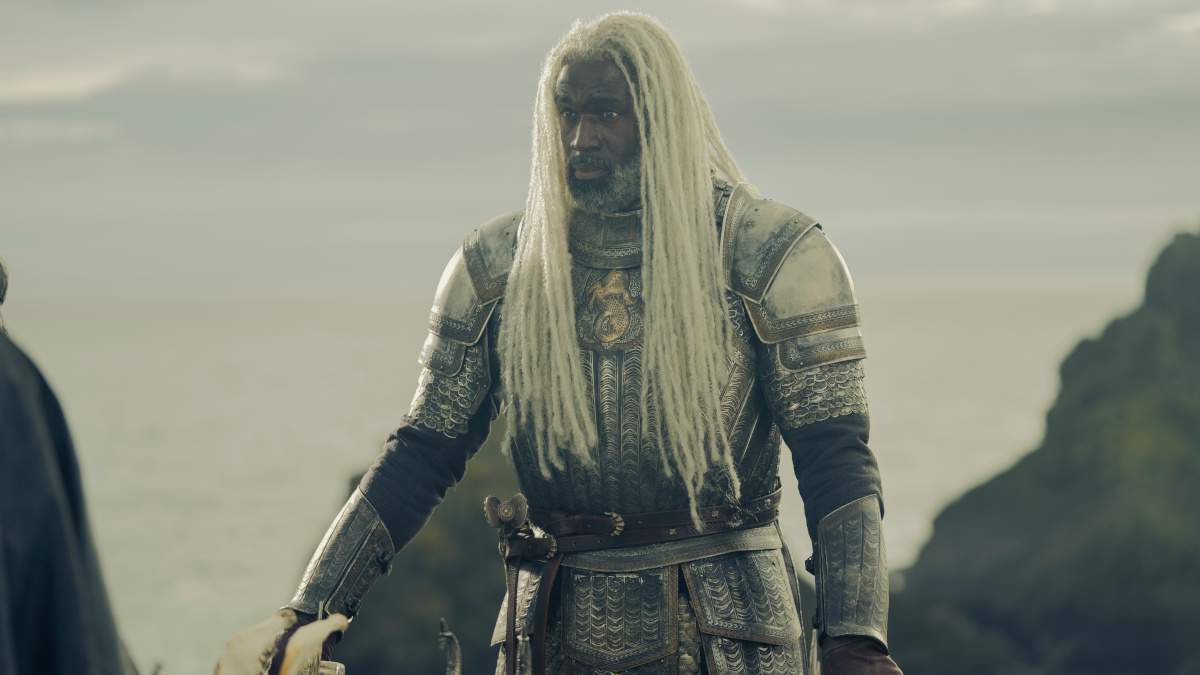 The third episode of House of the Dragon took place around three years after the events of the second. Viserys (Paddy Considine) faced pressure to name Aegon as his new heir. Rhaenyra (Milly Alcock) worried she was no longer needed and was under pressure to marry. In the Stepstones, Daemon (Matt Smith) struggled in his war with the Crabfeeder.

Like the previous episode it opened up in the Stepstones with the Crabfeeder torturing his victims as his army burned and plundered their ships. His fun was interrupted when Daemon arrived on the back of Caraxes and attacked. The Crabfeeder fled into the caves as Daemon searched for him. Daemon then had to retreat when he came under attack from a barrage of flaming arrows.

At King’s Landing, Viserys showed off his first-born son Aegon at a party for his second birthday. Otto (Rhys Ifans) was being encouraged to pressure the Viserys to name Aegon as his heir. Tyland Lannister (Jefferson Hall) approached the King to raise the matter of the situation in the Stepstones. Otto suggested that should he intervene after so long the crown would look weak.

Following the party, Viserys set off to the kingswood for a hunt. A heavily pregnant Alicent (Emily Carey) and accompanied him, along with Rhaenyra who really didn’t want to be there. Viserys told her it was her duty to take part. Before the hunt Rhaenyra was approached by Jason Lannister (Jefferson Hall), the twin of Tyland. He tried to impress her with his wealth and hinted he’d like to marry her. Rhaenyra realised that was why the King was so keen for her to attend and stormed off to confront him. She expressed that she didn’t wish to get married but Viserys lost his temper and said that she must.

Upset, Rhaenyra fled the camp on horseback but was spotted by Criston (Fabien Frankel) who gave chase. He eventually caught up to her and made her stop. She explained what had happened and he listened before urging her to return. Instead she decided to stay a while in the kingswood so Criston stayed with her.

The hunt began after a white hart was spotted. Viserys went to investigate and Otto thought the sighting might be the gods showing their favour. At the evening feast Viserys drank far too much wine and quickly became intoxicated. Jason presented him with a special spear that he hope could be used to kill the deer. After Viserys accepted it, Jason then expressed his wish to marry Rhaenyra. Viserys lost his temper when Jason suggested that Aegon may be named as a new heir.

Otto asked Viserys his opinion on the proposal and suggested he could command her to marry if he wished it. Visery said he wanted Rhaenyra to be happy. Otto had an alternative suggestion that she could marry her half brother Aegon. Viserys lost his temper again and Otto decided it best to leave it. Viserys drank some more until he was approached by Lyonel Strong (Gavin Spokes). He too had an opinion of who was best for Rhaenyra to marry and suggested Laenor Velaryon (Matthew Carver) the son of the Sea Snake (Steve Toussaint).

In the kingswood, night had fallen and Rhaenyra and Criston made camp. He again urged her to return but she refused. Their horses became spooked and Criston drew his sword. A wild boar came charging out of the darkness, knocking Criston to the ground before attacking Rhaenyra. Criston wounded it and Rhaenyra finished it off with a stabbing frenzy.

The next day the hunting party tracked and captured a deer. It was held in place for Viserys to kill and he did so with two blows from the gifted spear. Rhaenyra and Criston headed back with the slain boar in tow. On the way they came across the white hart but Rhaenyra told Criston to let it be. Everyone looked astonished as the blood-soaked Rhaenyra returned with her kill.

Back at King’s Landing, Otto spoke to Alicent and explained his thoughts on how Aegon should be heir to the throne. He told her that she must convince Viserys to change his mind as a woman on the throne could lead to chaos. She did go to see him but they spoke of the need for Rhaenyra to marry and of a plea for aid from the Stepstones. Alicent convinced Viserys that he should answer the call.

Viserys and spoke with Rhaenyra and asked why she was being so difficult. He explained that she had no choice but to marry. She said she knew that he wanted to replace her with Aegon as heir. He denied this and assured her that he had no intention of replacing her. He also gave her his blessing to seek out and find someone that she wanted to marry as he wanted to see her happy.

As battles raged in the Stepstones, a meeting was held to discuss the situation. Corlys, Laenor and Vaemond (Wil Johnson) argued on how best to proceed. The message of aid from Viserys arrived and was delivered to Daemon. He attacked the messenger and then headed out to face the Crabfeeder alone. On the beach he waved a white flag and the Crabfeeder and his men came out of the caves.

It was a trick and Daemon waited patiently for them to get near before attacking solo. He took out many enemies as he dodged volleys of arrows. After getting hit by several arrows it looked like he was going to quickly be overwhelmed. However his men arrived and attacked along with Laenor riding his dragon Seasmoke.

At the end of the episode, Daemon followed the Crabfeeder into his caved. Daemon emerged covered in blood but victorious, dragging the remains of the Crabfeeder behind him.