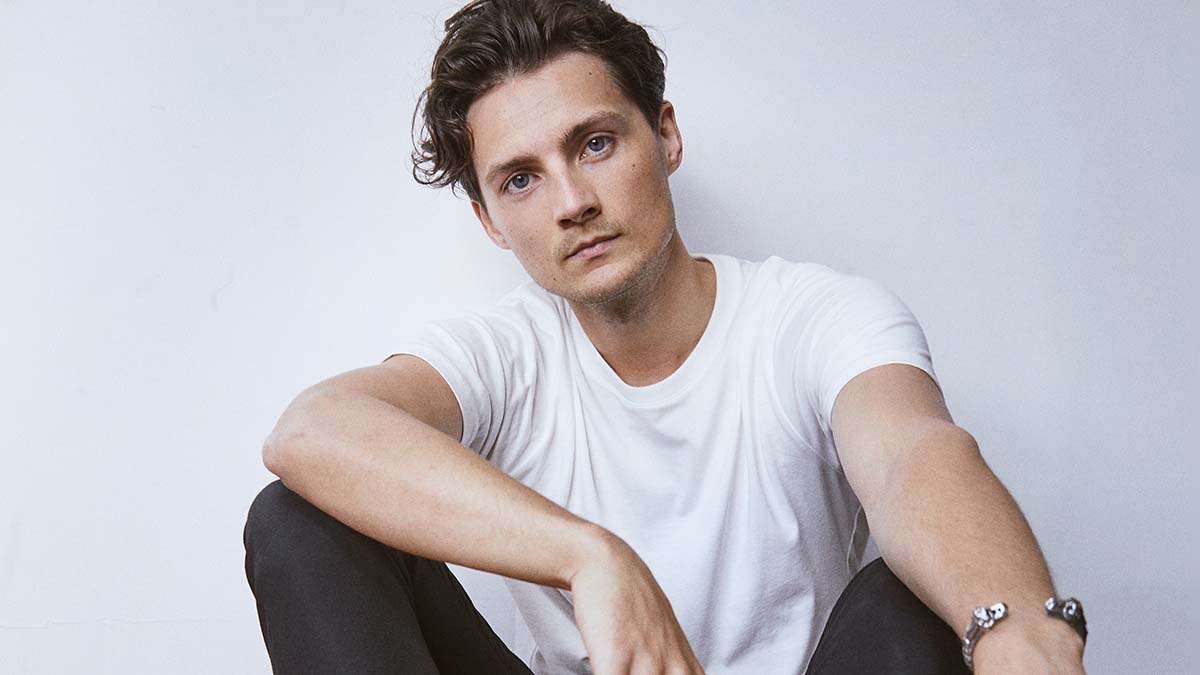 Brighton-born actor George Webster is perhaps best-known for his role as William of Orange in the critically acclaimed series ‘Versailles’.

His next role will be in Disney+’s upcoming series ‘Wedding Season‘ opposite Rosa Salazar (‘Alita: Battle Angel’) and Gavin Drea (‘Vikings: Valhalla’). The series is the first British original from the streaming giant and it will launch on Disney+ Day, this Thursday.

I spoke with George recently to find out more about ‘Wedding Season’, discuss being part of Disney+’s debut British original series, and to find out about his upcoming Apple TV+ show ‘Masters of the Air’…

‘Wedding Season’ is arriving on Disney+ this week and it’s unlike anything I’ve seen before. It’s a bit ‘Four Weddings and a Funeral’ with a twist. What’s the show all about?

I think you’re completely right in that it stands by itself. I always describe it as a kind of rom-com action thriller, which is already a cool mix of things. It’s about two people who meet over a summer of weddings and it turns out one of them is actually getting married themselves and lives this kind of secretive duplicitous life. Both these people get implicated in a murder investigation, go on the run and have to avoid various pitfalls along the way, trying to find out what happened and prove their innocence. I remember when I was reading the script (thinking) I have no idea who’s betraying who and what’s going on here. It stands on its own, especially somewhere like Disney+. It’s so exciting to have something that is a quintessentially British show. It’s the best of what we can do, which is that very specific style of humor and tonality that I think we get absolutely right.

This show is a really big deal for Disney+ because it’s the first UK original show. That must be quite special to be a part of…

Yeah, absolutely. It’s special enough just to be part of the Disney tree. But to (be able to say) you’re a part of the first ever Disney+ show that they did outside of America is is really good. It’s a really special thing. I think within the first couple of weeks, we all knew that they would like it. You can get a sense in the air if it’s working or not, and we got a real sense that it was working. Disney all along had been really supportive and given us some really positive feedback that rocketed us through the whole thing.

Disney is known for being a family brand but this show is particularly aimed at the adult market. Do you think that this will help broaden their appeal and pave the way for more British original series moving forward?

Yeah, definitely. Disney has been around for how many years? They’ve existed for that long, because they’re constantly able to reinvent what it means to be a Disney show or a Disney film. ‘Wedding Season’ is a really good example of that. When I tell people about the show, and then say what it’s on, they’re like, ‘Oh, wow. Yeah, I didn’t expect that from Disney’, which is great. You should always be surprising people, whether you’re a streaming service, or an actor or a writer or whatever. It keeps people on their toes and keeps it fresh. Disney have done such a good job of branching out throughout the years and through international streaming, this is their most recent iteration.

Disney+ recently announced that they have surpassed Netflix in terms of the number of subscribers they have and ‘Wedding Season’ is launching on Disney+ Day, which shows they have a lot of faith in the show. This must be a big deal for you as an actor?

Yeah, absolutely. (It’s a) fantastic opportunity and just a real pleasure to be a part of it. With streaming, you never know if it’s going to get an audience. The industry is changing so quickly. I’ve only been acting for eight years and I remember when I very first started, you had to get a lead in a film. Then this golden age of TV came in and (then it was) you need to lead in a TV show. Now if you can get a job, get a job (laughs) because it’s really hard to get work. Getting the opportunity to work on something like this, at this particular time, it’s a proper pinch me moment. I’m a huge Marvel and Star Wars fan, I’ve loved Disney since I was a kid and continue to do so, so just to see their name on the top of contracts that you’re signing is a really big deal for me as a nerd.

You play the character of Hugo and a lot of your scenes are opposite Rosa Salazar who plays Katie, your bride-to-be. Rosa is well-known for her work in films like ‘Alita: Battle Angel’. What was it like to work with her?

It was amazing. Honestly, Rosa’s a real talent and a real sweetheart. She’s really giving. I had a lot of scenes with her and she she gave me some really great advice off-screen about the business and about different things in life. She’s incredibly switched on and a really intelligent, funny person. She was really, really good to work with. It’s different for her to do something like this. Like I was just saying before about people getting outside of their comfort zones and doing things a bit different, I think this is very much that for Rosa and she explodes in it. I think she’s absolutely brilliant. I was a big ‘Alita: Battle Angel’ fan. I thought she was amazing in that so rocking up and just getting to work with her every day was a real genuine treat.

You share a lot of screen time with Gavin Drea as Stefan, and your characters have some tense scenes because they don’t like each other. What was it like to explore that dynamic?

I love Gavin, more than I probably love myself. He’s such a lovely guy and annoyingly talented as well. I remember reading the scripts, and the character Stefan that he plays is in pretty much every scene, and I remember thinking, ‘whoever is doing this job… it’s one of the hardest acting gigs I could possibly imagine’. He has to convey every single emotion in one scene and then do it again the next day. It’s the sort of thing you read and you go, ‘Oh my God, who are they gonna get to do this?’ When I met Gavin, I was like, ‘that’s fantastic casting’ because here’s the guy that can do that and pull an audience along with them for such a long time. He’s funny, he’s incredibly well versed in acting and again, for my nerd points, he just voiced V in ‘Cyberpunk 2077’, which I’m a huge fan of. He did a couple of warm-up scenes with me as V from ‘Cyberpunk’, which was the best day of my life. He’s fantastic. Hugo (and Stefan’s) relationship is definitely a hero/villain situation. Hugo doesn’t necessarily care about Stefan but Stefan really cares about Hugo, and he really gets under his skin. It’s quite a funny dynamic where Hugo can’t necessarily even remember the guy’s name but Stefan absolutely hates him. I think that’s pretty funny.

Outside of the two leads, the ensemble is so strong. Did that make you have to up your game as an actor?

That’s so true. Yeah, absolutely. It was cast so well. When you go to the read through, and you hear the characters come to life, just in a very 1% of what these actors are going to bring to it on set, you go ‘Oh, wow, everyone’s really good’ and you do have to up your game. You do have to join them in that and the fact that we all became really good friends really quickly, is a really good sense of chemistry. I think that’s a really good place to go from chemistry-wise in acting. I don’t really buy into this (idea that) you have to actually dislike the person if you’re acting in a scene where you dislike them. I think the more comfortable and the more bonded you are with people, the more vulnerable you can be. I think that comes across. Everyone’s still in touch and we’ve all been out since. I’ve been to see Omar (Baroud), who’s part of the show, he’s in ‘Cabaret’ on the West End. He’s a super talent. It’s really exciting to be amongst people that are that good.

Aside from ‘Wedding Season’ you’ve got ‘Masters of the Air’ coming on Apple TV+. What’s that project all about?

‘Masters of the Air’ I shot just before ‘Wedding Season’ actually last year. It’s the next in the ‘Band of Brothers’ saga. It’s produced by Apple TV and Amblin, so Steven Spielberg and Tom Hanks are co-producing it. Cary Fukunaga directed the first four episodes. It was one of the most extraordinary experiences of my life, not even just as an actor, just as a human being… being able to help tell these stories and share these stories about the Second World War. It’s all set around this American bomber group who are based in England during the war and they’re called the Bloody Hundred. So many of them didn’t make it because they were effectively cannon fodder. They were sent up and barely any would come back every single time. The impact that that has on people…. I think the show does a really good job of getting that sense of absolute hopelessness through but being able to overcome it every single day. It was a real, real treat.

Outside of these two series, do you have anything else in the pipeline right now?

Yeah. I was in a indie film that’s doing the festival circuit. It’s currently going under the title of ‘God’s Petting You’. I co-produced it with a friend of mine and we’re currently into some negotiations about where that’s going to go and how we’re going to get out there for the masses to see. Definitely keep an eye on that. It’s a really, really funny, dark comedy shot and set in Brighton, about a heroin addict and a sex addict who fall in love, and try to rob a porn star to run away to paradise together. It’s done really well on the festival circuit. We’ve been so pleased with how well it’s been received. We’re working towards delivering that and getting that out there.