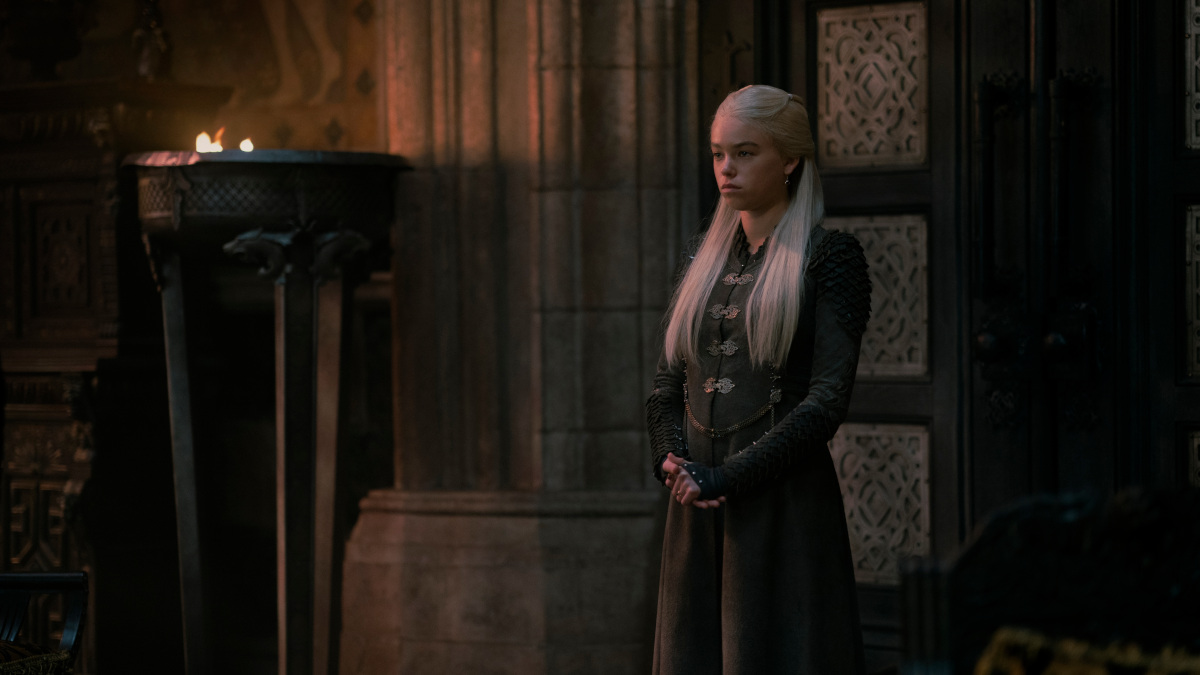 The second episode of House of the Dragon took place around six months after the first. King Viserys (Paddy Considine) faced pressures from the small council on various matters. Princess Rhaenyra Targaryen (Milly Alcock) was worried about her future and Prince Daemon (Matt Smith) tried to get his own way.

The episode opened up on the beaches of the Stepstones in the aftermath of a battle. The Crabfeeder had nailed his fallen opponents to driftwood where they would be eaten by crabs or drowned by the rising tides. The screams of his victims could be heard.

At King’s Landing, the small council discussed the matter of a replacement for the Kingsguard after the death of Lord Commander Ryam Redwyne. The new Lord Commander Ser Harrold Westerling (Graham McTavish) wanted to recruit a new member as soon as possible. With the help of Ser Otto Hightower (Rhys Ifans) he had arranged for suitable candidates to visit.

Lord Corlys “Sea Snake” Velaryon (Steve Toussaint) burst in to complain at the situation in the Stepstones. He was angry at his loss of ships and men but Otto explained that the crown would pay compensation. Instead Corlys wanted to take the Stepstones by force but Viserys explained he was not prepared to start a war.

Corlys said the Crabfeeder wouldn’t be afraid of them after they had let Prince Daemon (Matt Smith) takeover Dragonstone and live there for over half a year. Viserys tried to assure him that patience was needed to find a peaceful solution. Princess Rhaenyra had been listening and suggested they send dragonriders as a show of force but her suggestion was interrupted by Otto.

Rhaenyra was sent with Harrold to choose the new Kingsguard. She was introduced to each but left unimpressed by their lack of combat experience. However she was pleased when Ser Criston Cole (Fabien Frankel) was introduced and chose him.

Meanwhile, Viserys spent time with Alicent Hightower (Emily Carey) where he showed her the stone model he was building and explained its history. He accidentally broke one of the dragon statues and asked her how Rhaenyra was. She encouraged him to talk to her and agreed not to tell of their conversations. Later, Rhaenyra spoke to Alicent of her worries that her father would remarry and replace her as heir. Alicent said Rhaenyra should approach her father if she wanted to talk to him. She tried later over dinner without much success.

In the gardens of the Red Keep, Viserys spoke with Corlys and Princess Rhaenys Targaryen (Eve Best). Corlys and Rhaenys said the crown was perceived as vulnerable and proposed the King unite their Houses by marrying their 12-year old daughter Laena Velaryon (Nova Foueillis-Mose). Viserys was stunned and said he had not yet considered remarrying. He later sought the advice of the small council, Otto seemed shocked and against the idea while Grand Maester Mellos (David Horovitch) seemed keen on the idea as he thought it would repair the relationship between House Targaryen and House Velaryon.

Viserys later took a walk in the gardens with Laena. She asked if he knew where the dragon Vhagar nested and gave a rehearsed speech from her father. Viserys didn’t seem happy with the idea of marrying someone so young. Rhaenys confronted Rhaenyra and explained that the King would remarry, have more children and the first boy would instead become his heir.

Viserys confided in Alicent about the pressure for him to remarry. She presented him with a box that contained the broken dragon figure that she had the stonemasons fix. The King was called away because Daemon had stolen an egg that belonged to the dragon Dreamfyre. It was the same egg that had been chosen for Prince Baelon. Daemon left a note to say he was to marry Mysaria (Sonoya Mizuno) and that she was pregnant, he took the egg for the baby’s cradle.

The King was outranged and wanted to go to Dragonstone immediately. He was blocked by Otto who said he would go instead. Otto, Harrold and Criston headed for Dragonstone with 20 guards. When they arrived they were confronted on the steps by Daemon and his Gold Cloaks. Otto laid out his demands and the pair traded insults. As weapons were drawn, Daemon’s dragon Caraxes appeared, followed shortly by Syrax and Rhaenyra. Rhaenyra told Otto she was there to prevent bloodshed and then confronted her uncle in Valyrian. She taunted him to kill her but instead he gave up the egg.

With Otto away, Viserys sought the council of Lord Lyonel Strong (Gavin Spokes). His advice was that the King should marry Laena as it would leave him in a much stronger position. Their conversation was interrupted when the King was informed that Rhaenyra had returned from Dragonstone. He was furious that she had disobeyed him but happy at what she had accomplished. They spoke of their grief at losing the Queen and Rhaenyra explained she understood he must take a new wife. He said he had no desire to replace her as heir.

At the next small council, Viserys announced his intention to marry Lady Alicent Hightower. Lord Corlys was offended and stormed out the meeting. The decision also upset Rhaenyra who also left.

At the end of the episode, Corlys called Daemon to a meeting at Driftmark. They decided to ignore the King and formed an alliance to go up against the Crabfeeder.