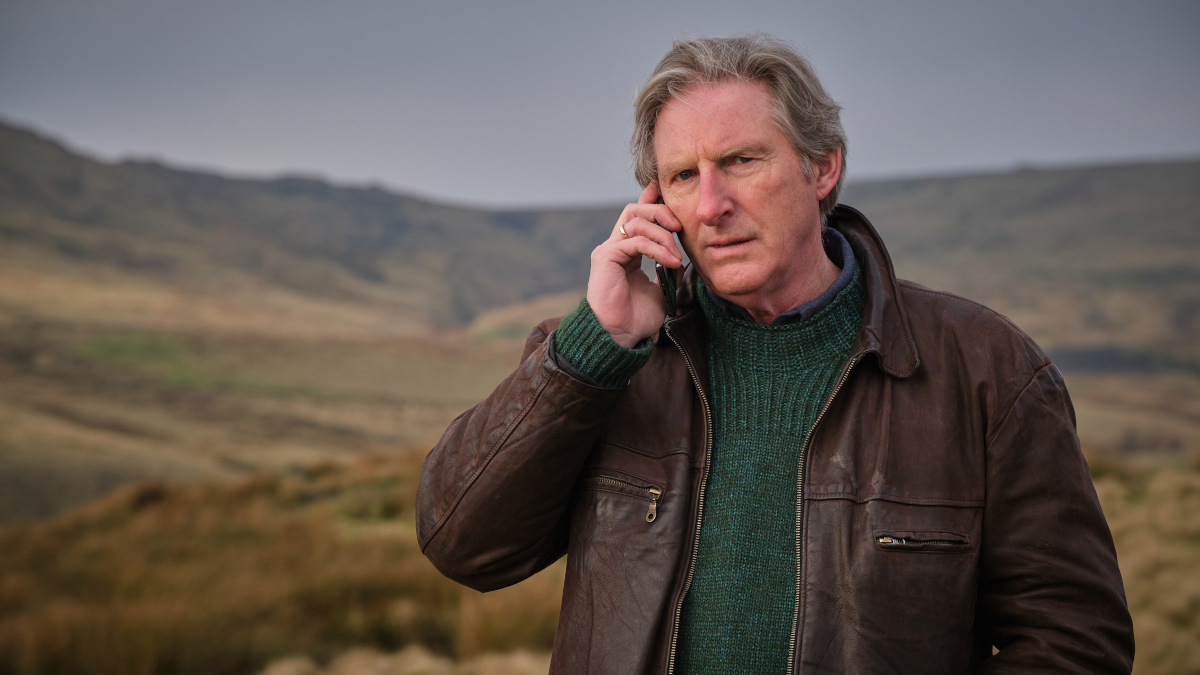 It’s over a year since Line of Duty season 6 and we must admit we’ve missed Ted Hastings and AC-12. Sadly there’s still no word on if we’re getting a season 7 but we’re happy to settle for Adrian Dunbar back on our screens in ITV’s new four-part drama ‘Ridley‘.

The new series began tonight and saw Dunbar play the role of Ex Detective Inspector Alex Ridley who is enticed out of retirement as a police consultant. After years of dedicated service he was forced into retirement due to health concerns and grief after losing his wife and daughter in a fire.

The episode opened up with Jesse Halpin (Rob Mitchell-James), a local sheep farmer, enjoying a pint in his local. After close he made his way back home through the woods but was shot and killed. His body was found the next morning by one of his staff, Lorna Spalden (Amanda Lawrence). DI Carol Farman (Bronaugh Waugh) arrived on scene and was briefed by DC Darren Lakhan (George Bukhari) and Dr Wendy Newstone (Georgie Glen). There was little evidence other than a couple of shotgun shells and some footprints.

Ridley was woken when former colleague Jean Dixon (Elizabeth Berrington) came knocking at his door. They went for a walk and while chatting she mentioned the shooting and Ridley seemed to know the name.

Meanwhile the police began their investigations and interviewed Lorna, Halpin’s wife Moll (Jennifer Hennessy) and daughter Catherine (Alexandra Hannant). They also spoke to pub landlord Esther Parry (Pauline Turner) and her son Steve Parry (Conor Lowson). Back at the station DCI Paul Goodwin (Terence Maynard) told Farman that Ridley had previously interviewed Halpin in connection with the disappearance of 3-year-old Zoe Lindsay from the Dunmore Sands Caravan Park. Ridley was convinced that Halpin was involved but a sex offender named Daniel Preston (Graeme Hawley) had been convicted for the crime. Due to this Goodwin didn’t want Farman to get Ridley involved in the case.

Farman ignored the order and decided to invite Ridley out for dinner. She wanted to find out what concerns Ridley had about Halpin and he explained how the investigation was flawed. Later he popped to his favourite club Marling’s which was run by his wife’s best friend Annie (Julie Graham). The place was empty and he sat and played the piano whilst singing part of “The Mountains of Mourne”. Annie came and had a drink with him.

An ANPR search placed Steve Parry near the scene of the murder so they brought him in for questioning. Catherine came down to the station to try and stop the interview as she was in a relationship with him. She also revealed that her parents had been arguing on the night of the murder. During interview Parry revealed that he’d had run-ins with Halpin. However he denied the murder and confessed that he was lamping (hunting after dark) with a mate. They had a licensed gun and fled after hearing the shots that killed Halpin.

After discovering that Preston had been released, Ridley and Farman paid him a visit. They asked him about Halpin and showed a photograph. Preston remembered that Halpin took a short job at the Caravan Park. Back at the station Goodwin wasn’t happy with Farman but eventually agreed to let Ridley help the case as a consultant.

Ridley and Farman got to work and visited Penny Lindsey at the Caravan Park. They showed her a photo of Halpin but she was convinced that Preston had committed the crime. They then spoke to Gill Moreland (Caroline Lee-Johnson) who worked in the office at the Caravan Park. She was able to confirm that Halpin had taken a job there. They next spoke to her son Adam (Reece Douglas) as he was with Zoe the day she disappeared. He recalled that he’d seen her by a white van but didn’t see the driver. Later Preston paid Gill a visit and he was assaulted by Adam as he left. He was knocked to the ground and hit his head which put him in hospital with a bleed on the brain.

Goodwin agreed to get a warrant to search Halpin’s farm and there they found a white van. Ridley wondered why Halpin was so protective of the woods and they decided to talk to Lorna again. Farman found her but she pulled a shotgun on her. Ridley managed to talk her down and they took her for questioning. The shotgun was a ballistic match for the murder weapon. She said it wasn’t her but did reveal the location of where she had helped Halpin bury the body of a girl.

Back in the woods a body of a young girl was recovered. Forensics felt she fit the profile of Zoe and determined she was killed by a blow to the head. They needed a DNA test against Penny to prove it was Zoe. Ridley went to ask Penny but she didn’t want to provide a swab as it could prove her daughter was really dead. Ridley told her what had happened to his family and convinced her the swab could give her closure.

As the case was coming together, Ridley felt compelled to meet with Dixon. He highlighted her failings when she was in charge of the case and explained he had no choice but to raise them to be investigated.

Forensics came back on the body and DNA swab. It wasn’t a match and there was no DNA from Halpin either. Also they realised that Zoe had a front tooth missing but the body did not. Ridley and Farman went back to Lorna for answers who explained the child they buried had died in an accident. Another search of the Halpin house turned up Zoe’s favourite doll. It was Catherine who had died and the Halpin’s had abducted Zoe to replace her.

They confronted Moll on their findings and she admitted what they had done. She also confessed to murdering Jesse because he wanted to tell Catherine that she was really Zoe. They arrested her for the abduction and murder but let her explain to Catherine/Zoe before they took her to the station. Having lost his own family, Ridley could sympathise for how Halpin must have felt.

Elsewhere in the episode, Ridley paid a visit to see inmate Michael Flannery (Aidan McArdle). It was revealed that he was the man who killed Ridley’s family. Ridley later confessed to Annie that the fire started by Flannery was supposed to kill him.

At the end of the episode, Ridley returned to Marling’s and belted out the song “Coles Corner” with a live band. Farman took Zoe back to her mother Penny for an emotional reunion. The next day Ridley took a walk and made a couple of calls to his answer phone to hear his wife’s voice.