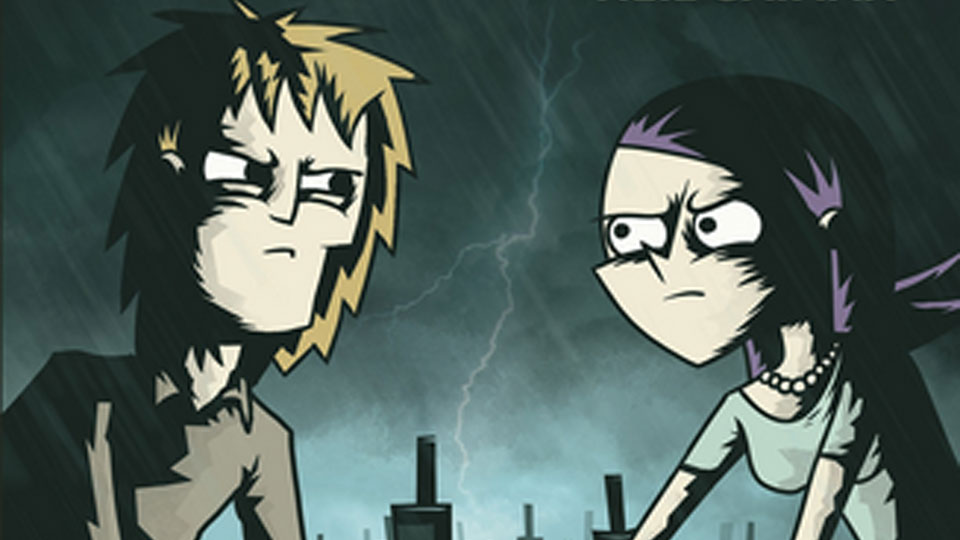 Australian performer and comedian Tim Minchin, known for his eyeliner and for his staunch defence of reason and healthy scepticism, wrote a song called Storm that went down a… well, storm. It’s become as well-known as Minchin’s Pope Song (if you haven’t heard that one, you should), and has now been released in book format using magnificent illustrations by DC Turner to turn Minchin’s imagined dinner-party from hell (not literally, of course) into a graphic novel.

Over the dinner table, Storm holds court on a number of preposterous ideas, espousing the virtues of homeopathy and astrology, and smugly claiming that knowledge is merely opinion. It’s all too much for the narrator, caught between conflicting urges to bite his tongue, ‘be nice’, and not rock the boat; and to challenge Storm’s relentless barrage of ignorant guff whilst making a stand for rationalism. Will enough of her stupidity push him beyond his breaking point? The fact that we can all relate to the scenario, even if not in an exact parallel of a tense science versus superstition argument in polite company, speaks of the universality of Minchin’s piece.

Minchin wrote the song in rhyming couplets and with a strong sense of rhythm. Without music, trendy people may call the lyrics beat poetry. Whatever pigeonhole it falls into, Storm is a witty and hilarious assault on the forces of woo-woo. We may have the academic books and scientific polemics of the likes of James Randi and Richard Dawkins, but with Storm, Minchin has pithily packaged rational scepticism for the masses. With its great illustrations and razor-sharp text, Storm is the most prettily presented any appeal to reason has yet been.

DC Turner’s illustrations do exactly what they are meant to do: they exaggerate the situation and caricature moods and situations. They take Minchin’s imaginative rebuttals and create vivid landscapes with them. The narrator becomes like Odysseus against Poseidon, tossed about in Storm’s waves of irrationality. “Isn’t this enough?” he asks, whilst the pictures evoke Carl Sagan’s pale blue dot…

The song is only a few minutes in duration, and as you’d expect this is a reasonably short book, with most of the space occupied by the illustrations. However, those who like chunks of text to read needn’t feel cheated: there’s a foreword by Neil Gaiman, popular writer and one of Minchin’s comrades in the fight against crazy beliefs and ill-founded opinions. There’s an afterword by DC Turner and Tracy King, who brought Minchin’s words into book form. Minchin himself says a few hundred words about the genesis of Storm into book form in an introduction. He reassures us that he’s more tactful in real life than the narrator of Storm – but we’re not sure we believe him. Some stinks are worth causing.

When Minchin speaks of his pride in the finished article, it is not misplaced pride. Storm brings Minchin’s vivid, poetic and passionately argued rant to life in a way that starkly contrasts to the jaunty song you may be used to. For the uninitiated casual reader, Storm is a fun attack on how not to think. Bedtime reading or nay, Storm is one for rationalists’ bookcases everywhere.