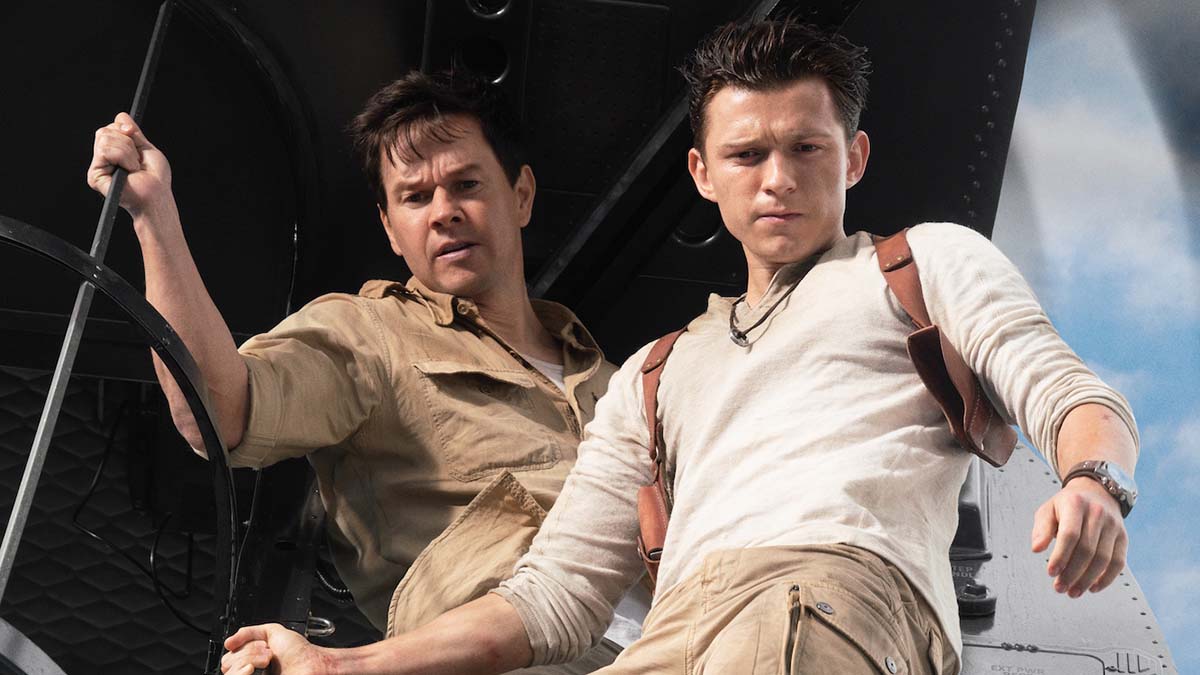 Tom Holland and Mark Wahlberg star in this likeable if uninspired adaptation of the beloved ‘Uncharted’ video games, which follow the treasure hunting adventures of Nathan Drake and his mentor Sully. After more than a decade in development, with nearly every leading man in Hollywood linked to play Drake (including Wahlberg himself), the creative decision was made to make the film an origin story, and focus on a young “Nate”, as he embarks on his first adventure.

The film begins in New York, where Nate is working as a bartender. He is recruited by Victor “Sully” Sullivan to help him locate a hidden treasure connected to the Magellan Expedition. Sully explains that he’d been working with Nate’s older brother Sam, who has now disappeared. Nate agrees to help, but his interest isn’t the treasure, it’s finding his brother.

So begins a globe-trotting romp, which finds them teaming up with fellow fortune hunter Chloe Frazer (Sophia Ali) whilst trying to avoid being killed by Santiago Moncada (Antonio Banderas), a ruthless billionaire who believes the treasure is rightfully his. There’s lots of puzzles to solve, tombs to be raided, fights to be fought, crosses to be doubled, and planes to fall out of. It’s the classic adventure movie formula. But as we all know, there are some long shadows in this genre, and it can be very hard to step out of them.

Why would you choose to watch ‘Uncharted’, when you could watch ‘Raiders of the Lost Ark’ or ‘The Goonies’ or ‘National Treasure’ or the first ‘Pirates of the Caribbean’ instead? ‘Uncharted’ borrows liberally from them all, which is of course absolutely fine, but it crucially brings nothing new to the conversation. Speaking of conversations, the script needed at least one more thorough re-write to polish up the dialogue. The quip-heavy banter between the lead characters has none of the requisite fizz.

On the positive side, some of the stunt work in the film is excellent, and you can tell that Tom Holland is throwing himself into this with real gusto. Unfortunately, because the majority of the film was shot on a sound stage in front of blue screens, a lot of this great stunt work is undercut by weightless and bland VFX. Vast sections of the film have the lifeless, airbrushed sheen of a video game cut scene.

However, as a Saturday night popcorn flick, that you can just sit back and enjoy, it just about succeeds. It never truly excites, but it never gets so dull you want to switch it off either. I realise that is damning it with faint praise, but there is genuinely the kernel of a good film in here. A few more real-world locations, and another pass at the script would have done it wonders. If they ever make a sequel, I would definitely watch it. Though I’d probably wait for it to be streaming on Netflix.

This blu-ray comes with a fairly packed roster of special features. Some of which is good, some of which is unintentionally hilarious. There is a director’s commentary with Ruben Fleischer, and also 10-minutes of deleted and extended scenes. After that, we are on to the many behind-the-scenes featurettes.

The first of which is ‘Never a Dull Moment: Stunts & Action’, which explores the action scenes in the film. Anyone who has seen any of the behind-the-scenes material on the Tom Holland Spider-Man films will be aware that he does a lot of his own stunts. That continues here, and it is clear that he is a very capable stunt performer. However, with his executive producer hat on he does spew some terrible PR drivel. Things like “movies just aren’t made like this anymore” and “it’s really authentic.” Sorry Tom, but yeah they are, and no it isn’t.

‘Becoming Nathan Drake’ touches on the prolonged development, with Mark Wahlberg mentioning how he was attached the role of Drake at one point. This is mostly skipped over to get to how great Holland is and how making it an origin story was the best decision they could have ever made. Which is of course true, because the film was going nowhere until he was cast.

There are further featurettes which focus on the supporting cast, the director, the on and off-screen dynamic of Holland and Wahlberg, and a breakdown of the film’s signature action scene. The disc is wrapped up with the music video for “No Mind” by Milkblood, and a selection of theatrical marketing clips.