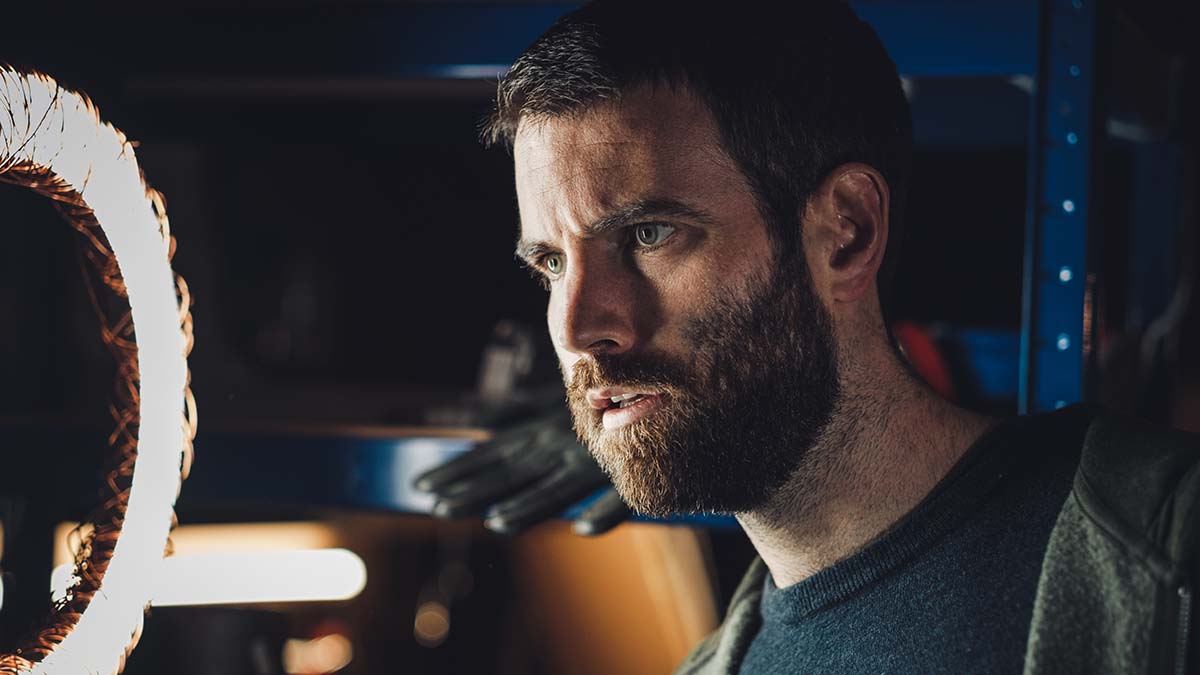 University lecturer and cognitive psychologist Ryan (Tom England) spends his spare time experimenting at his home, neglecting his wife Emily (Charlotte Ritchie) in the process. One of his experiments results in a portal that allows people to communicate with the dead, and as he begins to fine tune it, Ryan considers using it to contact his missing daughter Sam (Ellila-Jean Wood), who vanished without a trace. With the police not able to find her, or provide any information, Ryan takes the plunge but his decision has a catastrophic knock-on effect for everyone.

‘Repeat’ is an intense science-fiction film from film-maker Richard Miller, who wrote and directed the feature. Made in the middle of the pandemic with only a 5-person crew, ‘Repeat’ is an ambitious project that makes fantastic use of its micro-budget. As someone who has reviewed a lot of films, especially those with small budgets, I have to say first of all that ‘Repeat’ is incredibly impressive. Not only from a narrative perspective, which I’ll come on to shortly, but also visually. The film really utilises its budget to fantastic effect and it looks brilliant, with strong visuals throughout and really nice camera work.

The plot may take you a little time to get your head around but it’s worth putting in the effort. While the central premise is hooked around Ryan’s experiment, the real draw here is the unexpectedly emotional human drama at the centre of it. Ryan and Emily are a couple who is drifting apart after the unexplained disappearance of their daughter. That devastating incident has driven a wedge between them but rather than confront, or acknowledge it, Ryan and Emily have clearly started living separate lives. For her part, Emily tries to work on her marriage but Ryan’s obsession with his experiment means that her attempts fall mostly on deaf ears.

At the point that it’s suggested that Ryan use his invention to contact his daughter, you feel the emotional pull that the character goes through. On the one hand it’s better to know if she’s dead or not so he and Emily can get closure but by attempting to contact her, he’s having to acknowledge that she may actually be dead. That’s a heavy burden on his shoulders and you really empathise with the difficult decision he has to make. Miller’s script captures a character who has the weight of the world on his shoulders, and it’s impossible not to feel for both Ryan and Emily.

I won’t reveal where the film goes from there because not knowing is a big part of being able to enjoy it. What I can say is that the two leads – Tom England and Charlotte Ritchie – are excellent. England in particular gives the kind of performance that makes people take notice. The anguish of his character is plastered across his face for most of the film, and he’s an incredibly emotive performer. He’s ably matched by an excellent Ritchie, who really brings the struggle of a woman whose life has crumbled around her to the film. Together both actor are magnificent and their chemistry, even when they’re fighting, is impressive.

‘Repeat’ is one of the most ambitious and satisfying science-fiction films I’ve seen in a long time. I don’t recall being so moved by a film like this before and I commend Miller for straying off the beaten track to create a truly unique film. ‘Repeat’ doesn’t go where you expect and the climax is way more emotional than I would have expected when I started watching. Involving, intense and deeply moving, ‘Repeat’ is a film I highly recommend that you seek out when it’s released in November.