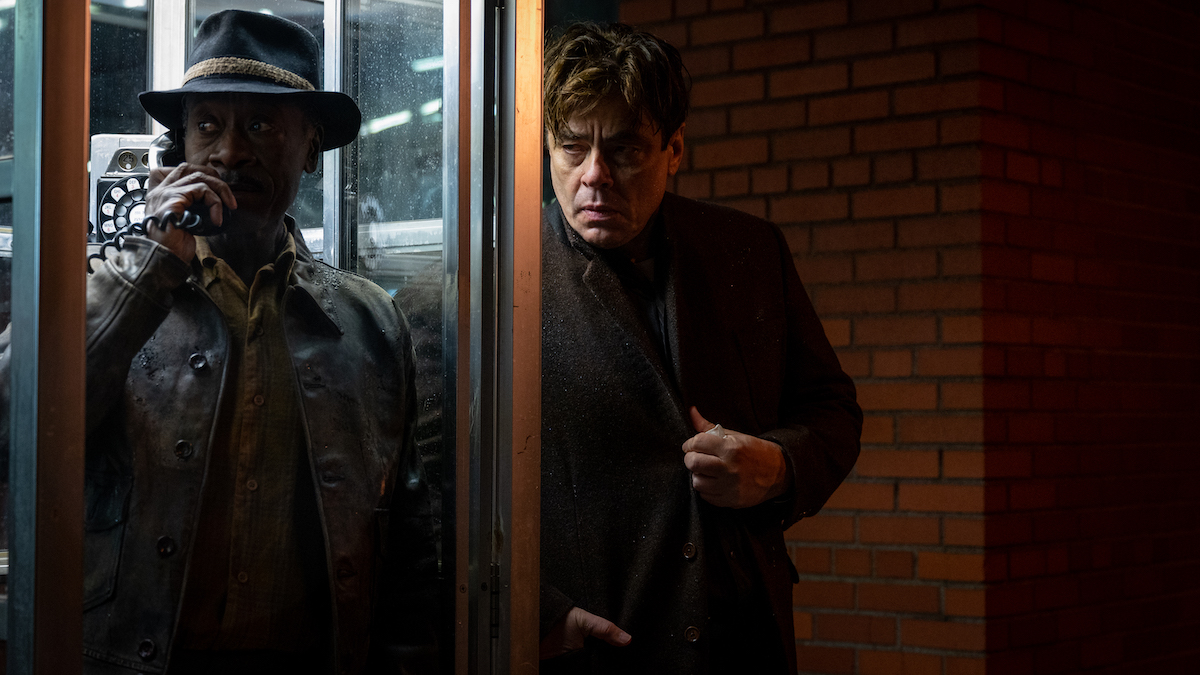 Skipping cinema screens altogether, ‘No Sudden Move’ the latest film from Steven Soderbergh arrives in the UK this weekend. The film has gone straight to digital, though subscribers of Sky Cinema/NOW can stream it for free. Working from Ed Solomon’s terrific “Coen Brothers meets Elmore Leonard via Shane Black” script, Soderbergh has assembled a ridiculously stacked cast for this hugely enjoyable period crime thriller.

Set in mid-50s Detroit, the film sees Don Cheadle playing Curt Goynes, a low-level criminal recently released from prison and looking for a quick score so he can get out of town. His connection hooks him up with Doug Jones (Brendan Fraser), a middle man for the mob, who pitches him a simple three-man job – hold Matt Wertz’s (David Harbour) family hostage, whilst he retrieves a valuable document from the safe at his work.

In a less than slick manner, Curt and the two other men, Charley (Kieran Culkin) and Ronald (Benicio del Toro) arrive at the Wertz house and take the family hostage. Matt goes to his office as instructed, but then unwisely decides to try and double cross the criminals. Things go awry, to say the least, and they all soon find themselves in the dangerous crosshairs of two rival gangsters, Frank Capelli (Ray Liotta) and Aldrick Watkins (Bill Duke).

Curt realises they have been set up, and he flees with Ronald. Caught at the wrong end of a far-reaching criminal conspiracy, the rest of the film sees the two crooks trying to piece together what happened, as the sprawling and complex plot winds around them. And it is extremely complicated. Not just the twisty plot and ever-expanding cast of players, but also the inner lives of our main characters. Solomon’s script keeps adding layers and complications, which brilliantly ramps up the drama and desperation of the bleakly funny situation they find themselves in.

Another heist movie at this point in his illustrious career could easily see Soderbergh operating on autopilot, but nothing could be further from the truth. Even working in a relatively stripped back style, he brings his trademark visual panache to proceedings. The film has a pleasingly vintage vibe, supplemented by the director’s use of ultra-wide angle anamorphic lenses, giving the film a distorted vignette-like appearance.

And whilst we’re all gleefully soaking up the slick stylistics and trying to follow the sleight-of-hand tricksiness of the heist-gone-wrong plot, Soderbergh is stealthily treating us to a film about something else altogether. The true intentions of ‘No Sudden Move’, like the blurred edges of the frame come into laser sharp focus in a final reel showdown with yet another A-lister smuggled deep on the call sheet.

And what a call sheet it is. As well as those already mentioned, there is Jon Hamm as a lawman on the trail of Curt and Ronald, Julia Fox as a scheming gangster’s moll, Amy Seimetz and Frankie Shaw as the women in Wertz’s life, and Noah Jupe as his son. The performances are uniformly terrific, but it is Don Cheadle’s film. His world-weary crook, dreaming of one last shot of a life better than this, is his best work in years.