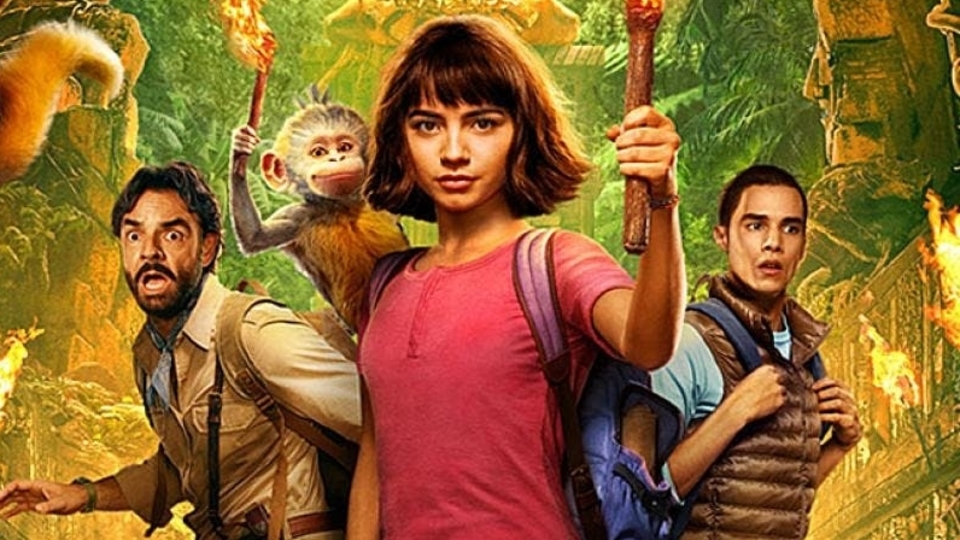 The animated adventures of Dora the Explorer have been entertaining kids for years, so when news of a live action movie first broke, it seemed like an odd fit for a big-budget cinema extravaganza. But by making Dora a teenager, this has opened up her world for many cool big screen adventures, and on the strength of this film, it would be fantastic to see many more films in this series.

We join Dora (Isabela Moner) as she embarks on a scary new adventure – dealing with high school and city life. Dora has grown up in the jungle with her explorer parents Cole (Michael Peña) and Elena (Eva Longoria). She’s fantastic at dealing with the perilous adventures that the jungle has before it, but after rushing into a treasure hunt that resulted in her getting injured, her parents decide that she shouldn’t come along on their next big expedition and instead she should spend time with some kids her own age.

So boarding a plane to the city where she will stay with her cousin Diego and his family, Dora begins to sample life in the city and has a few hiccups along the way acclimatising to her new surroundings. Meanwhile, her parents go missing on their expedition and before long, some mercenaries kidnap Dora (and inadvertently her schoolmates too) to try and track them down. Luckily they are saved by Alejandro (Eugenio Derbez), a friend of her parents who is looking to find them too. So begins a race against time for Dora to save the day (and her parents).

Director James Bobin, who is responsible for co-creating Flight of the Conchords and directing The Muppets and Muppets Most Wanted, brings his usual wit and style to the movie. This could have played by the numbers but instead, brings Tom Wheeler’s story and Matthew Robinson and Nicholas Stoller’s screenplay to vivid life. The film is full of hilarious gags and knowing winks to the audience and that makes the movie-going experience that much more fun.

Early on there’s a great scene when Dora starts breaking the fourth wall and talks to the viewers asking them to repeat a tricky word. Michael Pena just looks around questioning who she’s talking to, which is a great homage to the animated Dora and her trait of teaching kids tricky words in the TV series. Then there’s a fantastic sequence where a hallucinogenic flower makes the entire principal cast look like their animated selves, in a trippy and very funny spaced-out sequence.

The cast make the film great fun to watch, with Isabela Moner doing really well as the lead. She brings charm, wit and humour to the role and can handle the action really well. Eugenio Derbez is always worth the admission price and he never fails to raise a smile. Michael Peña and Eva Longoria do great as Dora’s parents with Jeff Wahlberg, Madeleine Madden and Nicholas Coombe rounding off the principal cast well. Even Danny Trejo and Benicio Del Toro lend their vocal talents to the mix.

Dora and the Lost City of Gold is great family fun and gives the younger generation a cool Indiana Jones/Lara Croft movie with plenty to keep them entertained. There’s some genuinely funny comedy on-show too, and mixed in with the great cast performances makes Dora one of the most enjoyable family summer blockbusters you’ll see this year.