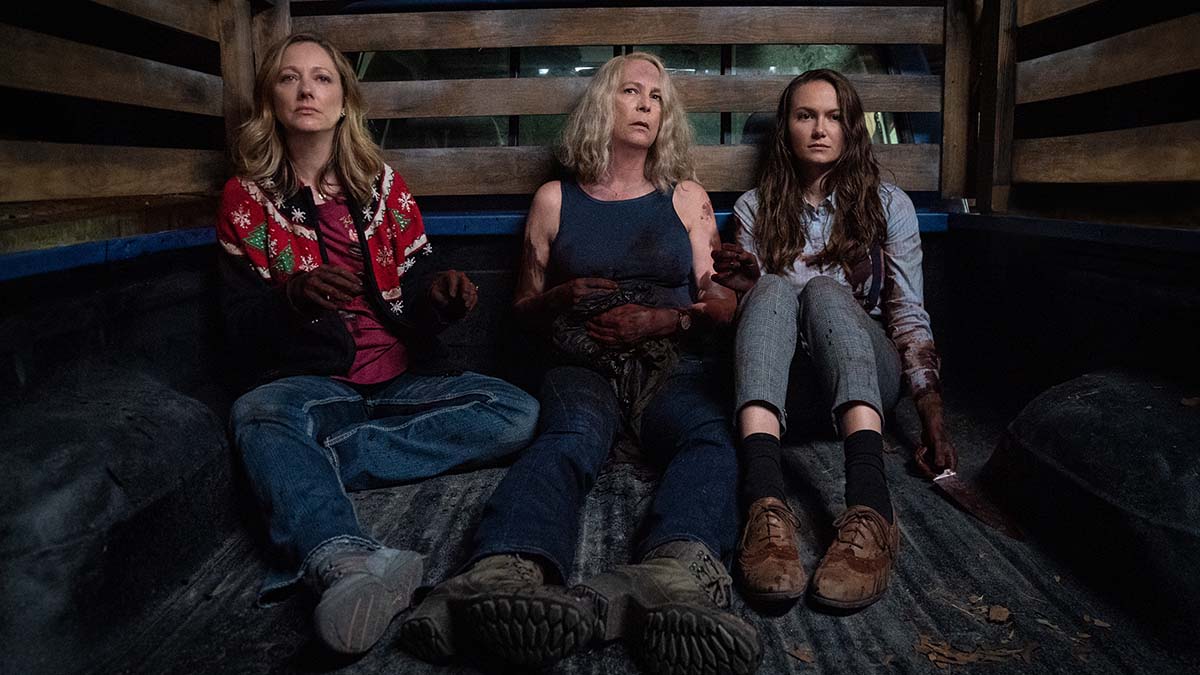 Deciding to retcon the majority of a franchise that has been running since 1978 is a bold move but that’s exactly what David Gordon Green did when he resurrected the ‘Halloween’ series with 2018’s ‘Halloween’. A continuation of the original movie, the box office smash discarded everything that had happened in the nine instalments that followed John Carpenter’s iconic film. The film also brought back Jamie Lee Curtis as Laurie Strode and saw Carpenter return to provide the score and executive produce.

While the critics were divided (no surprises there), fans flocked to cinemas to see ‘Halloween’ and it became the highest grossing film in the franchise so far. Its success was followed by the announcement of a further two films, creating a new trilogy with Curtis on board. The film picked up Laurie’s story 40 years later, now a recluse, hiding out in her home preparing for the day that Michael Myers returns to kill her. Estranged from her daughter Karen (Judy Greer) and granddaughter Allyson (Andi Matichak), Laurie was forced to come out of hiding when the scenario she’d spent her life preparing for happened. At the end of the film, Michael was trapped in Laurie’s basement and presumed to be burning to death.

‘Halloween Kills’ picks up from the final moments of the first film but not before taking a detour to 1978 to unpack the events of the original film, with a specific focus on Deputy Frank Hawkins (played by Thomas Mann in the flashbacks). Once those revelations are laid out, along with a surprise that will have fans of the franchise ecstatic, it’s back to the present day where a seriously injured Laurie is rushed to hospital with Karen and Allyson by her side. Interestingly, ‘Halloween Kills’ has a little more in common with ‘Halloween II’ than you might expect, with Laurie spending much of it in hospital.

With Laurie down-and-out, for the most part, it’s left to Tommy Doyle (Anthony Michael Hall), and Lindsay Wallace (Kyle Richards), the two kids that Laurie babysat in the original film, and former nurse Marion Chambers (Nancy Stephens), who was also in the original, to band together the residents of Haddonfield to hunt Michael down and end him once and for all. As the mob builds, Laurie’s family inevitably is pulled in with Allyson hell bent on revenge for the death of her father alongside her on/off boyfriend Cameron (Dylan Arnold) and his father Lonnie (Robert Longstreet), who bullied Tommy in the 1978 film.

‘Halloween Kills’ very much plays to the fans and that’s no bad thing. If you’ve never been a fan of the franchise, the chances are you’re not going to start enjoying them all these years on, but if you, like me, have loved them then there’s much to unpack and enjoy here. It’s a thrill to see Kyle Richards, Nancy Stephens and Charles Cyphers reprising their roles from the 1978 film. Tommy Doyle is recast as Anthony Michael Hall, who gives a performance full of gusto, and you actually forget he wasn’t a part of the franchise until now.

The film is a lot more brutal than any that have come before. The violence and gore is dialled up significantly as Michael makes his way through Haddonfield, slicing and dicing anyone that he comes across. The writers have certainly found some inventive ways to dispatch this film’s victims and Michael is most definitely at his most sadistic in this instalment.

Something that’s been pointed out in early reviews is that given ‘Halloween Kills’ is the second in a trilogy, it’s fairly obvious that Michael Myers is unlikely to be killed. That didn’t bother me because to be honest, I don’t want him to die. No fan of the franchise does. The whole point is to witness the carnage and see Laurie go up against Michael. Perhaps what’s a little disappointing this time around is that Laurie never comes face-to-face with Michael but plenty of the supporting characters do.

‘Halloween Kills’ is a relentless bloodbath that will delight fans of the long-running franchise and will inevitably get slagged off by most critics. Whilst not as strong as 2018’s ‘Halloween’, the film puts an interesting twist on the story by focusing on the original characters banding together to finish off what Laurie has started. There’s a nice set-up for the third (and final?) part, due to arrive in cinemas next Halloween, and a shock that I didn’t see coming. I’m already counting down the minutes to next Halloween.