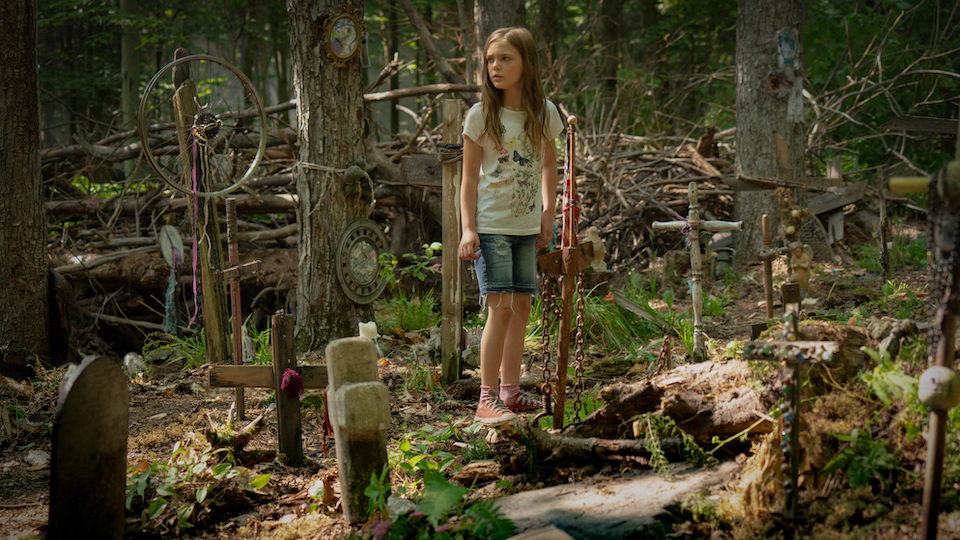 There’s quite enough burying in this film, so I’ll not bother burying the lede. The original version of Pet Sematary is better. That probably won’t be said too often about all the new Stephen King remakes we get over the next few years. As we all know – apart from the odd masterpiece here and there – King’s work has been rather haphazardly adapted in the past, and so this is a great time to see all his famous stories getting the quality treatment they deserve. This remake has all the right ingredients for a terrific new version, but like the reanimated corpses in the film, it just didn’t come back the same.

Directed by Kevin Kölsch and Dennis Widmyer, the plot doesn’t stray too far from the book or the ’89 film. Not to begin with anyway. Jason Clarke is Louis Creed, a doctor who has moved his young family from the big city out to rural Maine, where he has taken up a job at the university hospital. In the woods behind their new house, his wife Rachel (Amy Seimetz) and daughter Ellie (Jeté Laurence) discover a Pet Sematary. Their folksy old neighbour Jud (John Lithgow) warns them that the woods are a dangerous place.

When Ellie’s cat is killed in the busy road that runs in front of the Creed house, Jud tells Louis that he could spare his daughters pain by burying the cat deep in the woods, in a place far beyond the Pet Sematary. Louis does this, and the cat returns from the dead a day later, but he is no longer the same cat. Thanks for the advice Jud! One minute you’re telling us the woods are a dangerous place, and now thanks to you we’ve got a fucking zombie cat.

If you’re familiar with the book, or with Mary Lambert’s original movie, you will know what comes next. The book is without a doubt the bleakest and most distressingly horrific yarn that Stephen King has ever spun. In the introduction to the paperback release he declares the novel to be the one where he finally went too far. I think that after two attempts we can safely say that it is just too hard to put that sort of darkness on screen. Lambert’s version embraced the absurd in order to leaven the pitch-black horror with humour. This version plays it straight. It doesn’t work.

The second half of the film takes some generous liberties with the source material, but I see why the filmmakers made these choices. For those who haven’t seen the film, I won’t spoil it here, but the big change in this version certainly adds to the threat, but loses some of the truly disturbing horror in the process. The cast are excellent across the board, and Jason Clarke is terrific as Louis, haunted and maddened by the grief he suffers. In terms of production value and acting talent the film is a big step up from the ’89 film, but in every other way the original is far superior.

Pet Sematary comes in at a pretty lean 101 minutes, but gives the impression that it was intended to be much longer. It appears to have been cut to pieces and then reassembled in a fairly careless way. It feels rushed, and a bit clumsy, and in order to make sense of some of the things that are happening, it relies on a pre-existing knowledge of either the book or the original film. Which in all honesty is a complete failure of storytelling. It’s a creepy film, there’s a few decent jump scares, and some really gruesome and grisly stuff in there too. But the whole thing lacks atmosphere and is largely forgettable.

The main event on the Blu-ray disc is Beyond the Deadfall, an hour-long documentary covering the making of the film. There’s lots of in-depth behind the scenes material, interviews, and contributions from the main cast and crew. Most of the rest of the special features are just deleted scenes that have been repackaged in different ways.

There’s the actual deleted and extended scenes. Then there’s the alternative ending for the final ten-minutes of the movie. This expands a bit further on what happens in the theatrical release, and needless to say, it is super dark. Night Terrors consists of three sequences of Louis, Rachel, and Ellie each having nightmares about the things in the woods. Finally there’s The Tale of Timmy Baterman, featuring John Lithgow hamming it up wonderfully as he tells this ghoulish story.

Pet Sematary is available now to Download & Keep and on Blu-ray and DVD 12th August from Paramount Home Media Distribution.