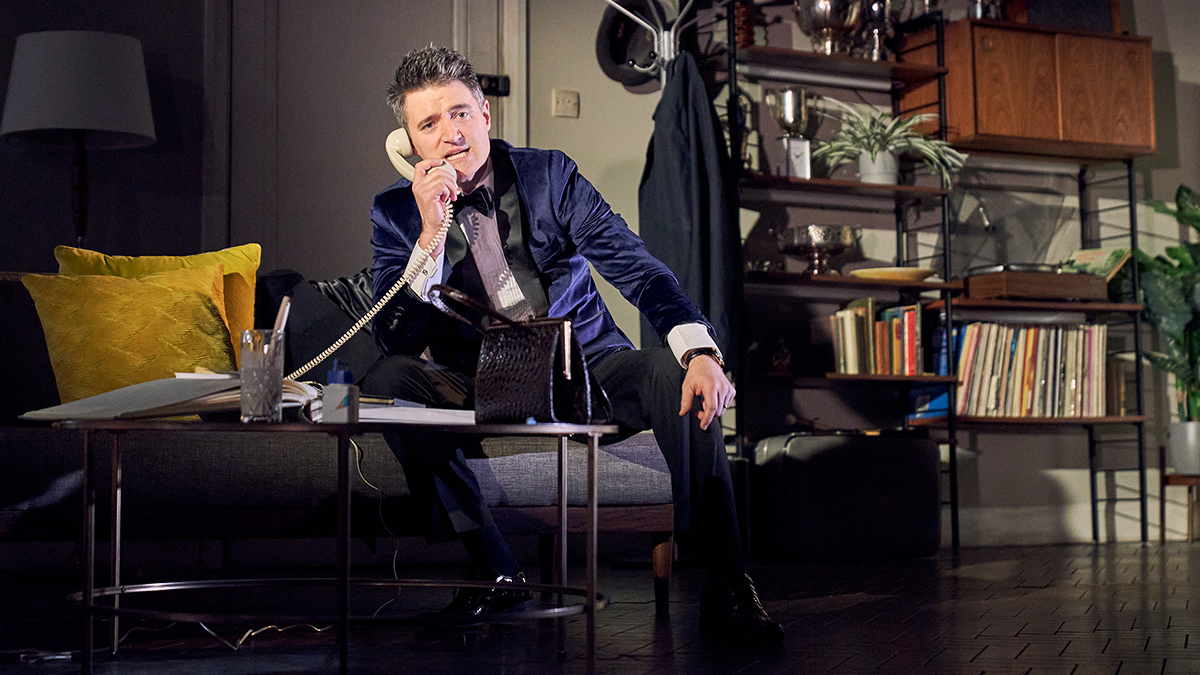 In a time when so few of us have been able to go to the theatre for such a long time thanks to the pandemic, crowd-pleasing productions are certainly welcome. Frederick Knott’s clever, witty thriller ‘Dial M for Murder’, adapted for the big screen by the master of suspense Alfred Hitchcock in 1954, is currently embarked on a national tour and is this week playing at the Churchill Theatre, Bromley. It is appropriate to look to a period piece, from a time before face masks, nose swabs and hand sanitiser, to entertain us and transport us away from modern woes.

This production, directed by Anthony Banks, updates the original early 1950s period to the 1960s. The reasons for this transposition aren’t wholly clear, and perhaps it’s simply to enjoy some great songs from the period, such as the Beatles’ ‘Tomorrow Never Knows’, during the musical interludes. That’s good enough reason for me. It stars Holby City/Casualty actor and Strictly Come Dancing winner Tom Chambers alongside Diana Vickers, who climbed to fame on ‘The X-Factor’ and has since enjoyed a successful stage career. They play husband and wife Tony and Margot Wendice.

On the face of it, the Wendices are the perfect couple: young, affluent and attractive. Only Tom discovers that Margot is having an affair with crime writer Max Halliday (Michael Salami). With his tennis career over, he’s also feeling the financial pinch. What if he could commit the perfect murder and inherit his wife’s wealth? Tony comes up with an ingeniously clever ploy to persuade somebody else to kill his wife, but is it foolproof, and can he go through with it?

Frederick Knott’s superbly structured play has been delighting audiences since the 1950s. As the balance of power keeps shifting, and the outcome hangs on a tiny, almost circumstantial plot device, audiences can’t help but be drawn in, even when they know how this tightly-plotted thriller with plenty of twists, turns and reversals eventually unravels.

By and large, this production succeeds, using a fast pace and stylish transitions between scenes to keep the suspense high. Tom Chambers has plenty of charm and charisma in the lead role of Tony Wendice. He rattles through his dialogue and gives an enjoyably physical performance that seems almost like a tribute to Leonard Rossiter. But the temptation to play for laughs throughout the performance isn’t resisted often enough and this yields two problems: one is that opportunities are missed for Chambers to chill the audience by showing a much darker side of would-be murderer Wendice, especially in the first act. The other is that Diana Vickers playing his wife appears to belong in a different play, as after her flirtatious opening scene with Michael Salami, she remains entirely in serious mode. A lack of emotional nuance in her delivery unfortunately flattens her performance too. Much of the first half, while entertaining, feels a little disjointed.

The play is at its most successful after the interval, when it picks up considerably. Michael Salami (playing Margot’s love interest Max Halliday) is at his most effective when roused into fighting to save the life of his lover. Christopher Harper, who plays the dual roles of Captain Lesgate in the first act and Inspector Hubbard in the second, brightens up the stage with his turn as Yorkshire’s answer to Columbo. Hubbard may seem dim-witted, but behind his plodding appearance is one of Scotland Yard’s finest minds. The only incongruous moment is when he roughs up Max Halliday, which seems out of character for the affable Hubbard. Perhaps it is intended as a comment on the police and historic racism. If so, it is jarring rather than authentic. Nevertheless, Harper and Chambers enjoy a good rapport during the cat and mouse antics between villain and police officer, and the edginess that’s missing from Chambers’ performance in the first act is teased out – to excellent effect.

Ultimately, despite a few misgivings, the actors received a thunderous round of applause at the curtain call, and there was plenty of excitable conversation as we filed out of the theatre. Audiences are glad to be back, and ‘Dial M For Murder’ is just the right staple to remind punters why they’ve missed watching a drama unfold on the stage so much.