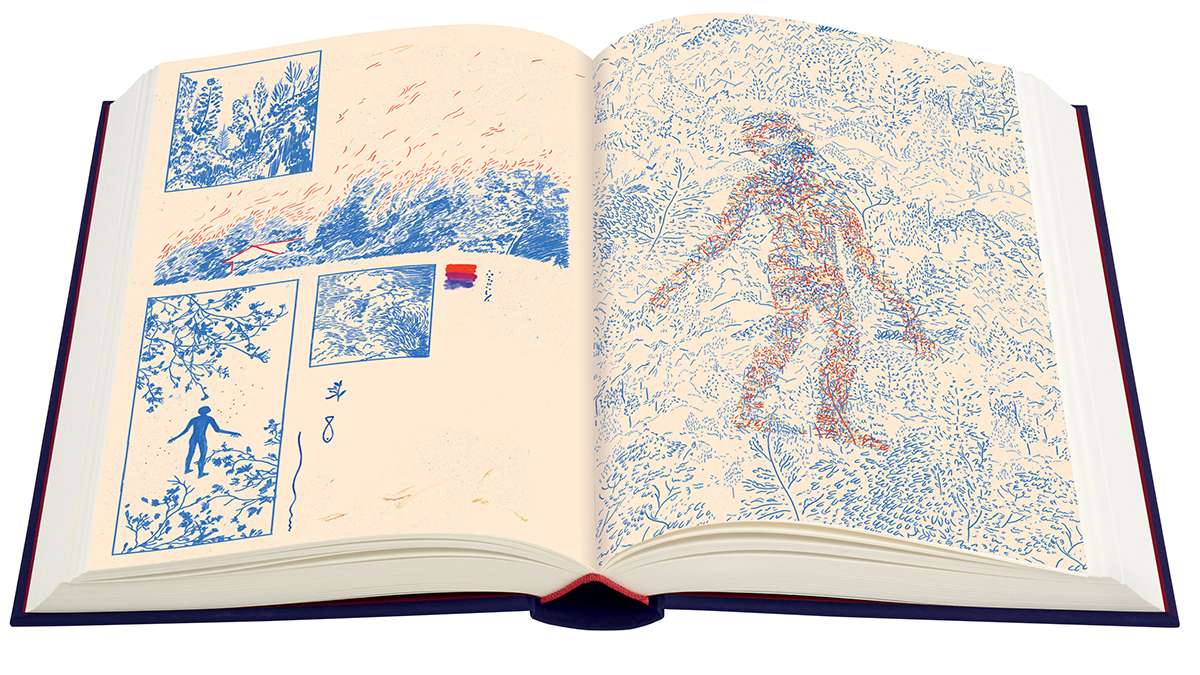 Japanese writer Haruki Murakami is one of those celebrated authors of modern classics that everybody should get around to at least once in a lifetime. His 2002 novel ‘Kafka on the Shore’ was critically acclaimed on its release, and it received an English translation in 2005. I worked as a bookseller at the time, and the title was always well-stocked and flew off the shelves. Now receiving a luxury release from The Folio Society with colour illustrations by Daniel Liévano, it’s the perfect time to explore this quite extraordinary title.

Murakami’s work skirts into magic realism – where the real world has connections to the realm of the fantastical. The protagonist is fifteen year-old Kafka Tamura – or so he calls himself. When his father warns him of a prophecy that Kafka will kill his father and sleep with both his mother and sister – a fate even worse than that of the tragic Oedipus of Greek mythology – Kafka decides to run away from home. He packs a bag, takes a bus out of Tokyo and embarks on a quest to find his mother and sister. But being a bookish teenager, he winds up staying in a library in Takamatsu where his life becomes ever-stranger. Running concurrently with Kafka’s story is that of the elderly Satoru Nakata. We learn from his backstory and official US Army intelligence reports that, as a child, he was caught up in a strange incident in the forest that has marked him for life. Gradually, the two storylines merge.

Murakami’s novel is impressively imaginative, and is populated with rich and interesting characters. Kafka’s exploits are ably supported by Oshima, a transgender man who works in the library, and two versions (perhaps like Schrodinger’s cat) of Miss Saeki, who, it is revealed, recorded a popular song which is what the title of the book is named after. Nakata, on the other hand, is aided by a kind young truck driver called Hoshino who is happy to act as a sidekick to the old man.

Some of the events are, on first reading, inscrutable. Nakata, who can communicate with cats, is less than impressed when he encounters Johnnie Walker (who is described exactly like the emblem on the whisky bottles), and finds that he is a mass exterminator of cats, because he is hoping to make a flute from their souls. Hoshino, on the other hand, teams up with Colonel Sanders (of KFC fame) who leads him to the portal to an alternate reality from where he can make sense of his past. There is a sense of ironic detachment in the author’s prose that makes these passages amusing in parts.

The unusual nature of the storytelling means that ‘Kafka on the Shore’ isn’t a book that will resonate with everybody – if you prefer straightforward and tangible plots, then this is perhaps not the book for you. If, on the other hand, you enjoy the works of Salman Rushdie, or Neil Gaiman’s ‘American Gods’, then Murakami’s similar style of merging the mundane with the supernatural or even the divine may well prove captivating. Overall, I felt the narrative lacked the cogency of Rushdie and Gaiman’s works. I couldn’t shake the feeling that, although the author must have loosely mapped out where the story began and ended, he found the path between the two points as he was writing. That approach often leads to dead ends and too much extraneous detail of the type that would be cut by an author writing in the service of his or her plot. I also found the overtly sexual nature of the protagonist discomforting – after all, Kafka is still a minor. Telling the story from Kafka’s perspective, Murakami focuses on his sexual awakenings and physical body so often that it feel gratuitous at times.

Even if there are aspects of the story that leave readers cold or bewildered, ‘Kafka on the Shore’ is likely to be one of those novels that you end up thinking about or debating at length with others long after you read the final page. What it’s about is not necessarily what it’s about, but each reader will find his or her own meaning and draw their own conclusions. It is a clever, provocative and unpredictable read.

In the introduction to this beautifully-produced edition that celebrates the work of one of the world’s most popular and acclaimed living authors, Murakami explains how he came to choose the name ‘Kafka’ for his protagonist, and why he wanted to tell a story from the perspective of a fifteen year-old boy. The pages are enlivened by colour illustrations by Daniel Liévano that riff on the idea of the quantum world, where its rules and laws seem totally incompatible with our own, and which makes it so philosophically hard to determine what is ‘real’. They capture the essence of the multi-layered universe Murakami has created for his novel.

The Folio Society edition of Haruki Murakami’s Kafka on the Shore, translated by Philip Gabriel, including a new introduction by the author and illustrations by Daniel Liévano, is available exclusively from www.foliosociety.com.

In this article:Haruki Murakami, Kafka on the Shore, The Folio Society