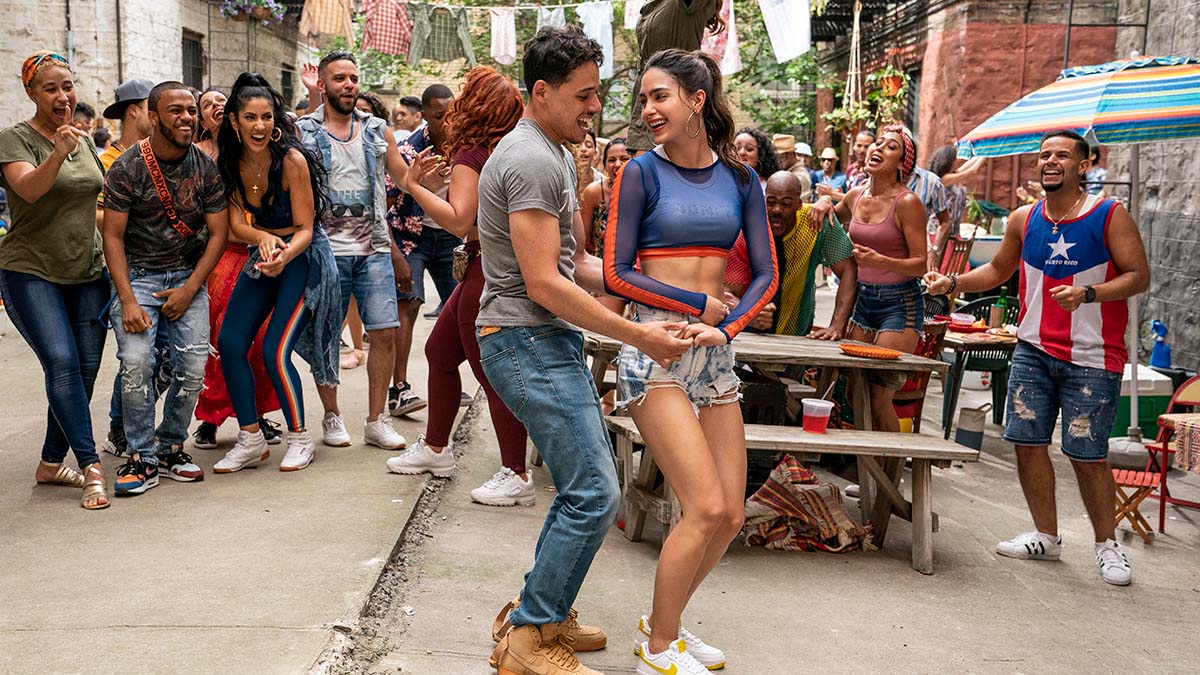 After a particularly testing past 18 months, the masses deserve a feel-good spectacle that reminds us of the magic of musicals and cinema. ‘In The Heights’ is that movie – a bold, bright, vibrant and toe-tapping classic that channels the very best of past cinematic musicals, with an urgency and relevance that fitting for today’s clued-up audiences.

It’s no surprise to see ‘Hamilton’ genius Lin-Manuel Miranda behind this. Along with Quiara Alegría Hudes (who wrote the script for the film), they have adapted their popular musical stage-play book and concept ‘In The Heights’ into one of the best summer movies of the year. With ‘Crazy Rich Asians’ director Jon M. Chu bringing his unmistakable visual talents to the mix, the film delivers on every count and is a great example of involving and heartfelt storytelling that engages on every level.

The plot revolves around dreamer Usnavi (Anthony Ramos), a hard working immigrant living in the multi-cultural melting pot that is Washington Heights, New York. Dreaming of one day returning home to the Dominican Republic to revive his late father’s business, Usnavi makes plans to chase his dreams as his friends and acquaintances from the neighbourhood also face challenges pursuing their own aspirations over a 3 day period before a blackout falls across the city.

Usnavi owns a local Bodega, a shop which acts as a meeting point for many of the films memorable characters. And this is where the film really comes into its own, showcasing a diverse and energetic cast that all deliver above and above to make this such a memorable adventure.

Screen legend Jimmy Smits is excellent as Kevin Rosario, who runs the local taxi company. His daughter Nina, played by the very impressive Leslie Grace, is back from Sanford University, but their hopes for a brighter future aren’t quite living up to expectation, with Nina not feeling accepted in her new world, whilst Kevin is secretly struggling to pay her tuition – something he is willing to sell his business to fund. Their relationship and chemistry are a real high-point of the film.

Nina rekindles her old romance with Usnavi’s friend and her father’s employee Benny (Corey Hawkins). Leslie Grace and Corey Hawkins are electric onscreen and feature in some of the most memorable moments of the movie, including a gravity-defying musical dance number on the side of a building that has to be seen to be believed.

Usnavi in the meantime, has his own romantic interests in the shape of Vanessa (Melissa Barrera), a young designer looking to move downtown in order to chase her dreams in the fashion world. Their paths seem to be heading in different directions but that doesn’t stop Usnavi and Vanessa from exploring a potential summer of love. Melissa Barrera is without doubt a huge talent that I expect to see a lot more of in the future. She co-leads the film extremely well and is easy to fall for, just as Usnavi does.

The supporting cast are all superb with the likes of Gregory Diaz IV, Daphne Rubin-Vega, Stephanie Beatriz, Dascha Polanco, Noah Catala and Olga Merediz all delivering memorable turns. Even Lin-Manuel Miranda has a cameo as Piragüero the street-vendor, after aging out of playing the role of Usnavi himself. But make no mistake, as great as everyone is, this is without doubt a star-making turn from Anthony Ramos. He is truly exceptional here, delivering one of the best leading turns you’ll see all year and expertly holding a film together that has a lot of moving parts. He is fantastic in the role, with ‘In The Heights’ marking out an exciting first-step in a burgeoning new career to follow.

With amazing musical numbers, dance sequences that will soon become musical legend and a visual style that bathes the eyes in sunshine and hope, ‘In The Heights’ is a feel-good masterpiece that fully deserves a big audience. Do yourselves a favour and go and see In The Heights in a cinema to help alleviate the lingering dread from the past year, whilst giving you optimism and hope for a brighter future full of wonder and aspiration. ‘In The Heights’ is an utter delight that can’t be missed.