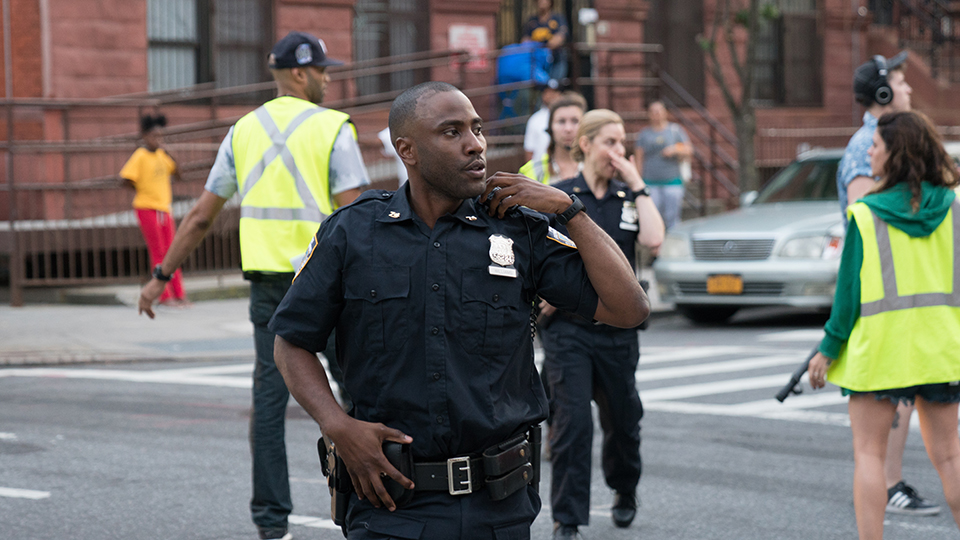 Manny (Anthony Ramos) is with a group of friends when they get stopped and harassed by the police. As the situation quickly escalates, he pulls out his phone and films the incident, which ends up with one of his friends being shot. Black police officer Dennis (John David Washington) knows that his white colleagues are corrupt but is hesitant to say anything as a promotion is looming over him. Meanwhile Zyrick (Kelvin Harrison Jr) is a high school athlete with a promising future in baseball but he’s not sure he wants to ignore the racism that surrounds him.

Monsters and Men is a timely film from writer/director Reinaldo Marcus Green that looks unflinchingly at the ongoing problem of police brutality against black people in America. The scenario that the film depicts is one that is all too common and barely a week goes by without reading about another case like it. The interweaving storylines complement each other while showing completely different sides of the same story. The viewer begins by seeing things from Manny’s perspective but once you see things through Dennis’ eyes, you start to truly appreciate just how difficult a situation this really is.

What Monsters and Men spends its time unpacking is that in cases like this, it’s often a lose-lose situation for any black person. That idea is really evident in the stories of both Dennis and Zyrick. Dennis has a white female partner in his job as a police officer and he knows that if he starts trying to expose the corruption he witnesses within his department, he will likely end or at the very least stunt his own career. On the one hand you could say that attitude is selfish but on the other if Dennis rises to a more powerful position, he has the ability to affect real change.

Similarly Zyrick wants to pursue a career in baseball but is put off by the stereotypical questions posed to him by the talent scout. He’s asked about any trouble he’s had with the police, despite having had none, and his father willingly pushes him to present himself as something different to who he really is. His passion for baseball is called into question when he starts to feel he needs to campaign for justice over the murder of Manny’s friend.

As well as having strong writing and direction, Monsters and Men is buoyed by three very strong central performances. Anthony Ramos is a rising star thanks to his recent turn opposite Lady Gaga in A Star is Born and he’s believable and impressive here. Kelvin Harrison Jr makes an impact despite his character seemingly being disconnected to the other two stories. His performance is sensitive and thoughtful. The standout though it John David Washington as Dennis, who really brings the personal and professional conflict of the career to the fore.

Monsters and Men shines a light on a very real problem that’s shockingly rife in America. The film is engaging, emotive and will get you thinking about the injustice that black people face due to the colour of their skin. With strong performances and powerful direction, the film is worthy of the praise that’s been heaped upon it. The ending may be a little more open ended than some viewers will like but that only serves to drive home the point that this issue isn’t one that’s going to be solved quickly or easily.