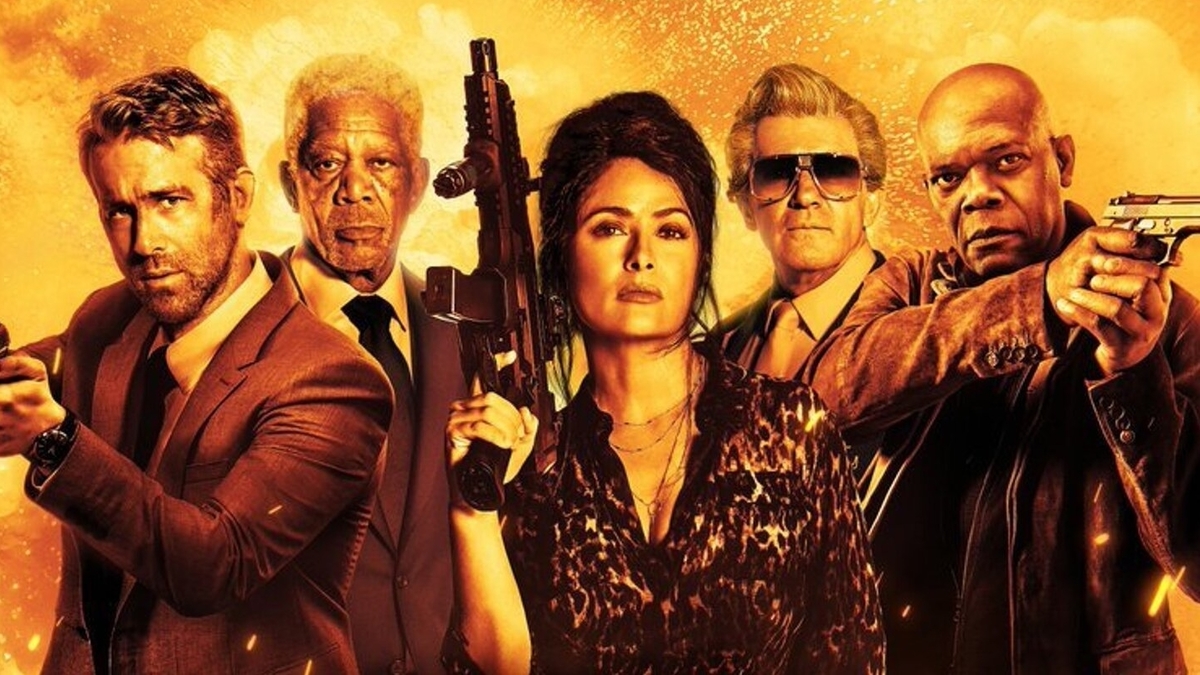 In 2017 a quiet release for action-comedy ‘The Hitman’s Bodyguard‘ brought about some impressive box-office numbers, with the film taking a global haul of over $176 million dollars from a modest $30 million dollar budget. Those numbers don’t lie, so it was somewhat inevitable that Hollywood would try and make lightning strike twice. The end result is a frivolously fun and forgettable romp with an amazing cast and some nice gags thrown in, even if it won’t leave much of a mark once the end credits roll.

‘The Hitman’s Wife’s Bodyguard’ finds Michael Bryce (Ryan Reynolds) in therapy. His AAA bodyguarding licence has been revoked and is under review, he’s still traumatised from his time protecting hitman Darius Kincaid (Samuel L. Jackson) and he no longer wants to use guns. Taking advice from his stressed therapist to go on vacation and relax a little, Bryce decides to make a change. But that calming bliss is soon interrupted by random gunfire as Sonia Kincaid (Salma Hayek) has tracked him down to enlist his help in freeing a kidnapped Darius.

Ryan Reynolds could do this kind of role in his sleep, but it is a testament to him that he still brings his A-game to the table for the sequel. I think what is abundantly clear here is that this cast have a lot of fun working together, and you can see this up onscreen. If you send Ryan Reynolds, Samuel L. Jackson, Salma Hayek and Antonio Banderas around Europe blowing stuff up who wouldn’t have fun?

Reynolds and Jackson instantly pick up on their chemistry left off from the last film. The bickering is a highlight and their separate interactions with Hayek conjure up some fun scenes. I could listen to Salma Hayek curse all day long, and she amps-up the crazy for another memorable turn here as Sonia Kincaid. Her energy and enthusiasm for the role is great to see and she works effortlessly well with all of her co-stars.

This time around the film calls in some heavy hitters for two pivotal roles. Antonio Banderas was clearly on Salma Hayek’s speed-dial when a charismatic but deadly villain was needed for the film. He’s as brilliant as always. And then there’s Morgan Freeman in a refreshingly active role as Ryan Reynold’s world-renowned bodyguard step-father.

Frank Grillo is once again underused in a film – why can’t someone give this man a decent franchise? Alice McMillan is also not in the film enough, with only brief glimpses of screen time present. Richard E. Grant returns as Seifert in typically outlandish style for an amusing cameo, while Tom Hopper impresses as the golden boy of the Bodyguarding world, hilariously named just ‘Magnusson’ in true Zoolander fashion.

It won’t be short-listed come awards season next year but if you’re looking for a piece of pure escapist fun, you can do a lot worse than ‘The Hitman’s Wife’s Bodyguard’. The strength of the cast, the crazy action and the comedy are enough to see this through the finish line, and I certainly wouldn’t be against seeing another sequel in the future. The film ends with a gag that I genuinely laughed out loud on, and it sets up a third film surprisingly well. Let’s hope all three are up for another jaunt around the world’s most glamorous locations. I know I am.