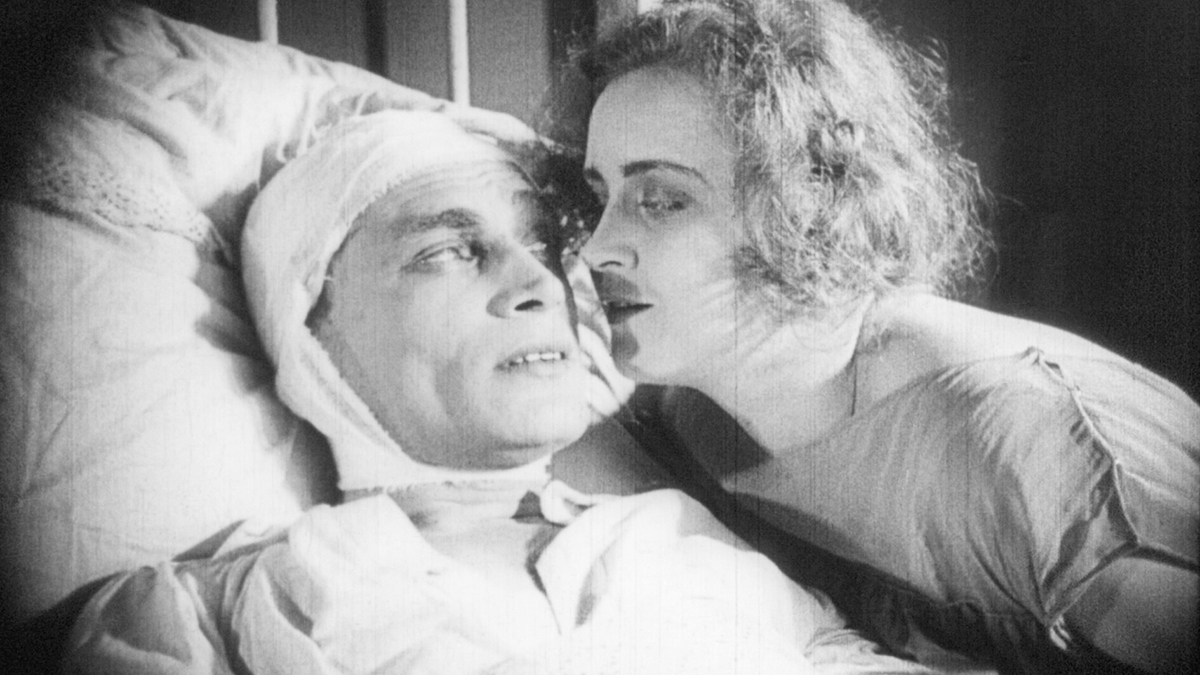 Robert Wiene’s 1924 masterpiece of silent cinema ‘The Hands of Orlac’ is released on Blu-ray by Eureka Entertainment. It followed Wiene’s earlier film, 1920’s triumph of German expressionist cinema ‘The Cabinet of Dr. Caligari’, and reunited the director with its lugubrious star, Conrad Veidt.

The premise of the story is an intriguing one, lifted from the novel by Maurice Renard. Paul Orlac (Veidt) is a concert pianist, but when he is injured in a train crash, he loses his hands. Surgeons attach a pair of hands from a recently-deceased man, but Orlac learns that they belonged to a convicted killer called Vasseur, who was executed for his crimes. Orlac begins to obsess about his new hands, worried that they have a corrupting and murderous life of their own. Further pressure is heaped on his family life when he can’t play piano with his new hands. His wife Yvonne (Alexandra Sorina) visits Orlac’s father to beg for money, but is refused. Later, when Orlac Senior is found dead, suspicion falls on Orlac, who is struggling to distinguish reality from fantasy. Is he innocent? And if so, who killed his father, and why?

Wiene effectively creates and sustains a sense of neuroticism, and draws a fine, intense performance out of Conrad Veidt. He captures some incredible scenes. The train crash is astonishingly well-crafted, and raised the bar at the time for action sequences. The transitions between studio sets and locations are effectively-handled.

Naturally, to modern audiences, ‘The Hands of Orlac’ is incredibly slow. Film was enough of a novelty in the mid-20s to allow for scenes in which actors walk ponderously onto a set and nothing else, but that approach had been phased out even by the 1930s. There is also some camera flaring as the levels of light appear to rise and fall – another issue of early cinema that was quickly resolved. The lack of sound, save for a musical accompaniment, is another technique modern audiences have to tune into. Ultimately, you emerge impressed by how dialogue (conveyed by caption cards) is kept to a minimum. The theatricality of the performances is an aspect that may jar with viewers used to an era in which naturalism is revered as the pinnacle of an actor’s craft. It took some time to distinguish between techniques for the stage and screen.

Eureka Entertainment’s presentation of the film on Blu-ray gives audiences the best viewing experience currently available. As you’d expect from reels of this archive nature, the picture quality is variable, but the thrill is looking back in time by a century. The film builds to a tense and satisfying conclusion that even includes a comedy turn from Fritz Kortner as the antagonist Nera. It’s Conrad Veidt’s sinister, troubled performance that continues to fascinate. His talents were later rewarded in Hollywood, where he played a role in ‘Casablanca’. Following his early death, it’s the films of Robert Wiene for which he continues to be best-remembered.

Extras include a different, slightly longer cut of the film, and a feature on the key differences between the two versions. You can also find an audio commentary with Stephen Jones and Kim Newman, who assess the film’s importance. A short feature on the film underlines the theme of paternal resentment, and is interesting for those who like to examine the meaning of movies in depth.

In this article:Conrad Veidt, Eureka Entertainment, Robert Wiene, The Hands of Orlac