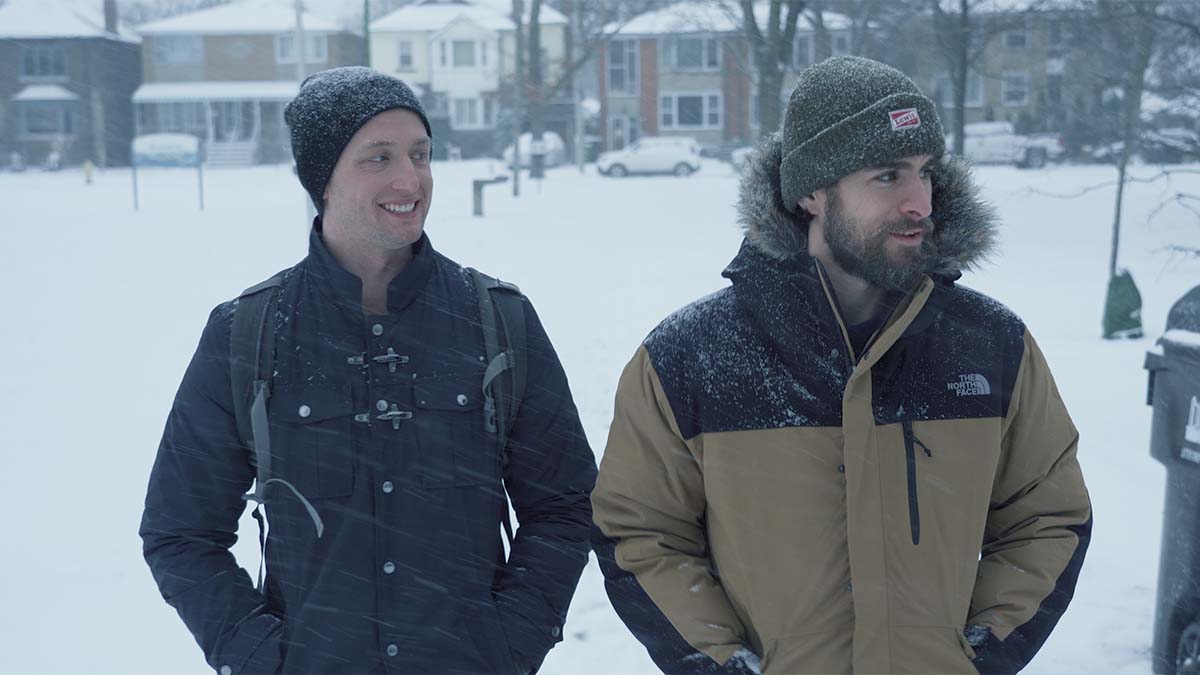 As he enters his 30s Ryan (Joel Ballanger) is consumed by loneliness, living an uneventful life with a dull job that just about passes the time. Sharing an apartment with his laidback room-mate Paul (Daniel Bossenberry), Ryan is secretly struggling with his sexuality and finding comfort in online encounters with men. At a birthday party for his friend Brad (Dan Tait Brown), Ryan meets Brad’s boyfriend Sam (Al Braatz) and the two hit it off. Ryan and Brad quickly become close and embark on an affair, and at the same time Ryan is stringing along Maya (Sara Hinding), a girl that has a crush on him. Can Ryan come clean to himself and his friends about his sexuality?

‘That Is All’ is a film from writer/director Mark Weeden and it has been gathering momentum on the festival circuit. Arriving on digital during Pride month, the film is an understated exploration of a man trying to come to terms with the reality of who he is. It becomes clearly very quickly that Ryan is in denial about his sexuality, hiding his wants and desires from the small group of friends he has.

Unable to be himself due to his own fears and the worry that he’ll be rejected by his group, Ryan finds an avenue to be himself once he meets Sam. The two men grow close quickly and their relationship escalates without either of them really considering the potential wider consequences. For Ryan, he’s doing the unthinkable to someone who is supposed to be a friend, and for Sam he’s finding comfort in Ryan’s arms because he’s unhappy with his relationship with Brad. Despite Ryan having never admitted his sexuality, he willingly enters into a sexual relationship with Sam and the two, for the most part, don’t even discuss it.

One of the interesting things that Weeden pulls out of the story is how Ryan behaves in relation to his actions. He’s oddly detached and at times he punishes Sam for his own decisions. Sam becomes quickly besotted with Ryan, wanting to be with him all the time, and while Ryan may feel similar, he retreats into being curt and blunt after each encounter they have. The further the relationship progresses, the more Ryan is worried that people will find out whereas Sam is happy to continue their affair, regardless of any consequences that may occur down the line.

The performances of Joel Ballanger and Al Braatz are what make the film. Ballanger in particular is excellent as Ryan and he really brings to life a character that is struggling but refuses to admit it. Ryan is a rather verbose character, at times barely uttering a word, but Ballanger communicates so much through his body language and facial expressions. Braatz has more dialogue to work with, and as his character is openly gay, he isn’t required to do as much of the heavy lifting as Ballanger. The two actors have a great chemistry though, and you find yourself rooting for their relationship even though you know what they are doing is wrong.

‘That Is All’ is an emotionally engaging watch, particularly for anyone who has either been in the closet or been with someone who is. As far as we’ve come in the world in terms of acceptance, it still isn’t safe for everyone to living as their authentic selves. You feel sorry for Ryan throughout ‘That Is All’ and it’s actually quite painful to see a character in so much pain that they can’t help themselves feel better. Weeden has crafted a powerful and moving film, with an ending that feels satisfactory if not inevitable.

In this article:Al Braatz, Joel Ballanger, Mark Weeden, That Is All