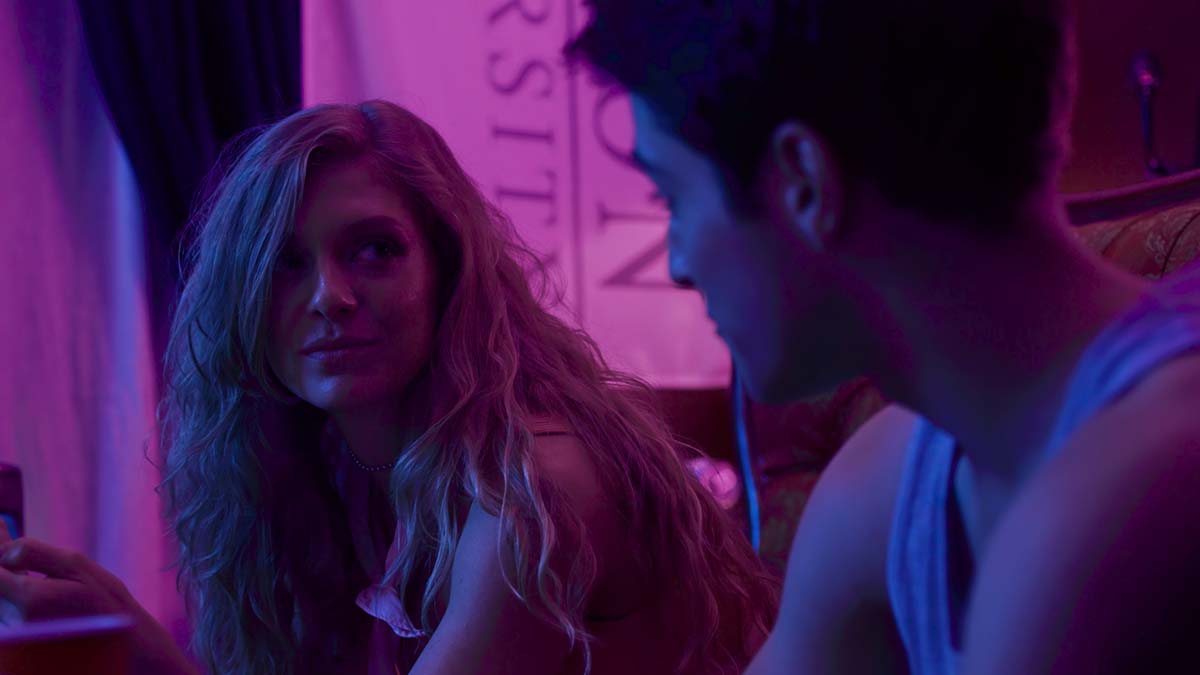 Ellery Scott (Lindsay LaVanchy) and her brother Wes (Froy Gutierrez) attend Whitton University, where the frat boys play a twisted game on social media tagging girls they’ve slept with by commenting an exclamation point. During a party at Wes’ frat house, Ellery’s friend Kylie (Isabella Gomez) believes she might have been sexually assaulted after drinking too much but she can’t remember for certain. The incident puts the spotlight on Wes and his friend Beau (Gattlin Griffith), and leads to a masked killer picking the students off one-by-one.

Before I saw ‘Initiation’, I read plenty of comparisons to Wes Craven’s 90s horror classic ‘Scream’, which got me really excited. Could this be the film to bring back the slasher genre and give it a new post-modern twist? Sadly not but ‘Initiation’ has plenty going for it even if its tone and message is a little all over the place. Eschewing the age-old tradition of offing someone in the opening minutes, ‘Initiation’ instead sets up a poignant conversation around sexual assault and it’s more than a third of the way into the film before the horror element presents itself.

Berardo, who also stars in the film and co-wrote it with fellow star Lindsay LaVancy and writer Brian Frager, directs with a real flair and he makes the film look way better than it should for the budget. He integrates the characters’ use of social media throughout the screen, with various phone screens popping up for the audience to see what the characters are doing. Part commentary on the way young people are reliant on their phones, and part narrative device, it’s a technique that’s bound to either be loved by audiences or loathed.

Once the kills kick in, ‘Initation’ finally switches up a gear and it doesn’t hold back on the violence. The killer wears a hoodie and a mask covered in mirrors, evoking a modern-day Michael Myers as he/she stalks a victim before moving in for the kill. The death scenes are among the best moments in the film, endlessly creative and unexpectedly tense. They also help to make the viewer ignore some of the plot holes that present themselves during the film’s run time.

Lindsay LaVanchy is the film’s star making for a very strong final girl. As Ellery she’s smart and switched on, the complete opposite of the sorority air-head you suspect she might be when you first meet her. LaVanchy’s performance is believable and much more rounded than the film needs but that makes her very compelling to watch on screen. The rest of the cast is solid too with nice turns from Jon Huertas (‘This Is Us’) and Froy Gutierrez (‘Teen Wolf’).

‘Initiation’ is a refreshing entry into the horror genre and while it doesn’t get everything right, it finds its feet in the second half to deliver a satisfying pay-off. The sexual assault storyline feels all-but abandoned though once the killer arrives, and while some answers are given I would have liked more closure around that. The film does make some very pertinent points about sexual assault in today’s society, especially in a post #MeToo world, but that storyline and the horror aspect didn’t gel as well as they could. ‘Initiation’ is a better-than-it-should be film but for me, it falls short of being a hidden gem like the much smarter ‘Tragedy Girls’.