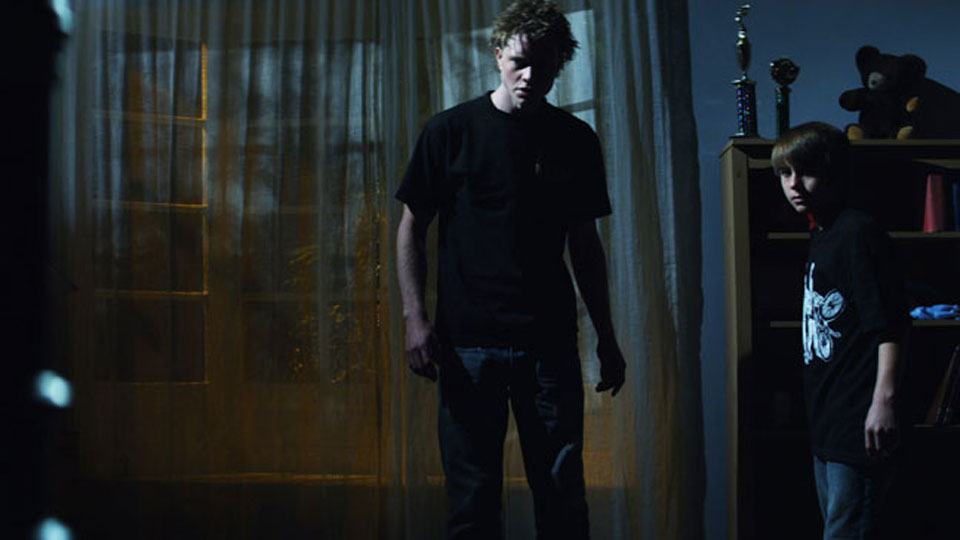 Neal (Jonny Weston) returns home after two years away following the death of his mother. Insistent at the time that there was something evil lurking under his bed, Neal was dismissed by his friends and family until his mother ultimately lost her life. Upon returning home Neal is reluctant to reconnect with his father who still doesn’t believe his story and has a new wife. Neal is also dismayed to discover that his little brother Paulie (Gattlin Griffith) is now residing in his room and experiencing the same night terrors that he endured. As the two brothers band together to defeat the supernatural force, their family is ripped apart and it looks as if history is going to start repeating.

Under The Bed is the new film from Steven C. Miller, the director of the critically-acclaimed The Aggression Scale, which is making its way onto DVD this September. Holding its European Premiere at today’s Frightfest, the film is one that we’ve been pretty excited to see since the festival programme was released.

There’s a lot that we liked about Under The Bed and the fact that it’s based around a common childhood fear is something that is both unsettling and intriguing. It plays on that fear very well with lingering camera shots, creepy music and a few jumpy moments. In the first half an hour we were taken back to being a child scared of the dark and the film was really effective.

What lets Under The Bed down is the poor non-sensical ending. After a slow-build the pay-off just isn’t worth the wait and there’s an air of convenience around the resolution. There’s also little-to-no-emotion paid to characters that get killed off along the way. We’d expect that if a close family member or friend was murdered infront of our eyes that we’d at least look a bit upset however temporarily.

Performance-wise there’s a real mixture from the cast. Jonny Weston and Gattlin Griffith are superb as the brothers and put in performances beyond their years. They make a great onscreen duo and you genuinely believe they are brothers. Peter Holden plays the father of the family and his performance is very stilted often jarring with the rest of the film. Musetta Vander does her best with an under-written part as stepmother Angela but she’s let down by some truly awful dialogue.

Under The Bed has so much promise but the silly ending turns the film into a damp squib. There was times throughout the film when the audience laughed at the unintentional humorous dialogue; that’s never a good sign for a horror movie. Before the screening we were shown a clip from Miller’s forthcoming movie Silent Night (a remake of Silent Night, Deadly Night) and we just hope the plot for that one is a little more considered.