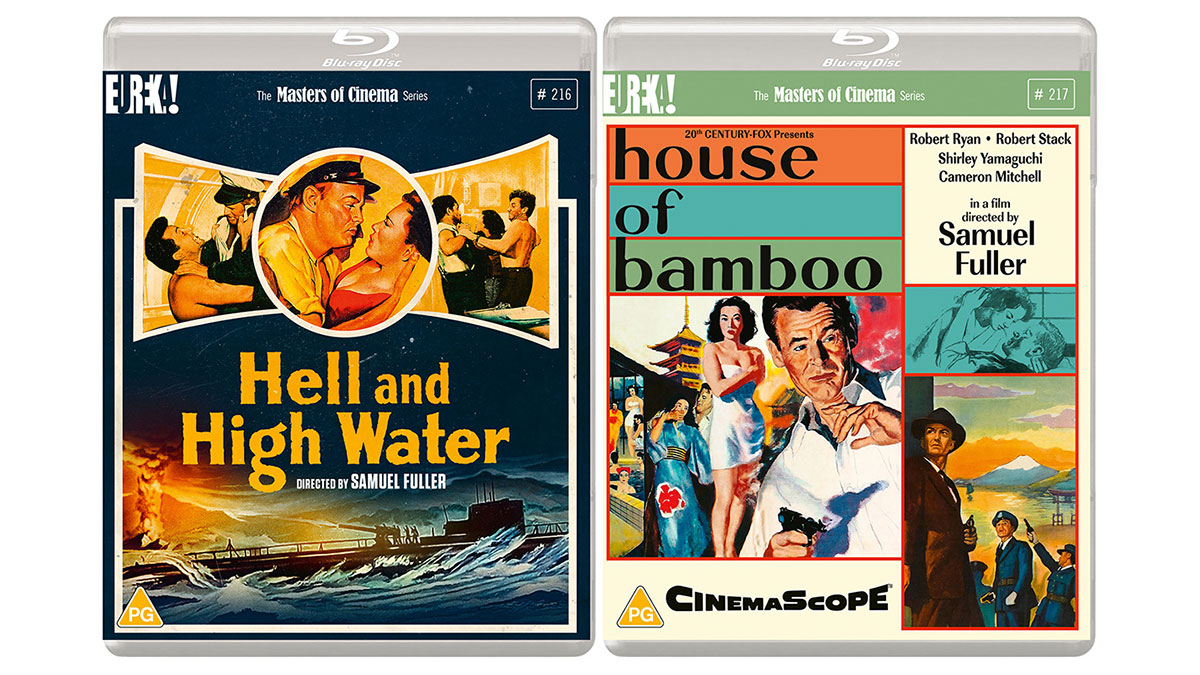 Eureka Entertainment has released ‘House of Bamboo’; Samuel Fuller’s sharp detective thriller set in post-World War II Tokyo; presented on Blu-ray from a 2K restoration as a part of The Masters of Cinema Series. The release is limited to 1000 copies only.

“What about Japan?” asked Zanuck. “Would you like to shoot a picture there?” “Holy mackerel, Darryl, now you’re talking!” When offered the opportunity to film an entire movie in Japan, (Fox would be the first major American studio to do so) Samuel Fuller jumped at the opportunity and the result is ‘House of Bamboo’, a lushly photographed, cold-as-ice film noir like no other.  Japan, 1954.

A military train is robbed of its cargo by a ruthless gang of professionals led by the sadistic, but brilliant, Sandy Dawson (the incomparable Robert Ryan). Weeks later, one of the thieves lies dying in a Tokyo hospital, shot by his own accomplices. Recently released convict Eddie Spanier (Robert Stack) arrives in Tokyo, and joins up with the gang, impressing Sandy so much he quickly becomes his “ichiban” (number one man), greatly displeasing the former favourite, Griff (Cameron Mitchell). But is Eddie all he seems?

Also starring the beautiful Shirley Yamaguchi, ‘House of Bamboo’ is a stunning, brutal masterpiece, featuring incredible widescreen photography by Joe MacDonald, and hard-boiled dialogue and action that is the Fuller trademark.

Eureka Entertainment has also released ‘Hell and High Water’; Samuel Fuller’s Cold War submarine adventure starring Richard Widmark; presented on Blu-ray from a stunning 4K restoration, as a part of The Masters of Cinema Series. The release is limited to 1000 copies only.

“In the summer of 1953, it was announced that an atomic bomb of foreign origin had been exploded somewhere outside of the United States… This is the story of that explosion.” Starting with a nuclear explosion and only escalating from there (Fuller was a master of the opening scene – “If a story doesn’t give you a hard-on in the first couple of scenes, throw it in the goddamn garbage.”), ‘Hell and High Water’ is a white-knuckle Cold War thriller that would have a huge influence on the future of blockbuster cinema (Steven Spielberg was so enamoured with the film that he kept a print in his car for many years).

When military intelligence suggests a secret atomic base is being covertly set-up on an island near Japan, former US Navy commander Adam Jones (Richard Widmark) is sent on a covert mission to prevent a nuclear attack that could trigger World War 3.

The Masters of Cinema Series is proud to present Samuel Fuller’s ‘Hell and High Water’ on Blu-ray from a stunning 4K restoration.

To celebrate we’ve got 2 sets of the films to give away. Enter below for a chance to win…