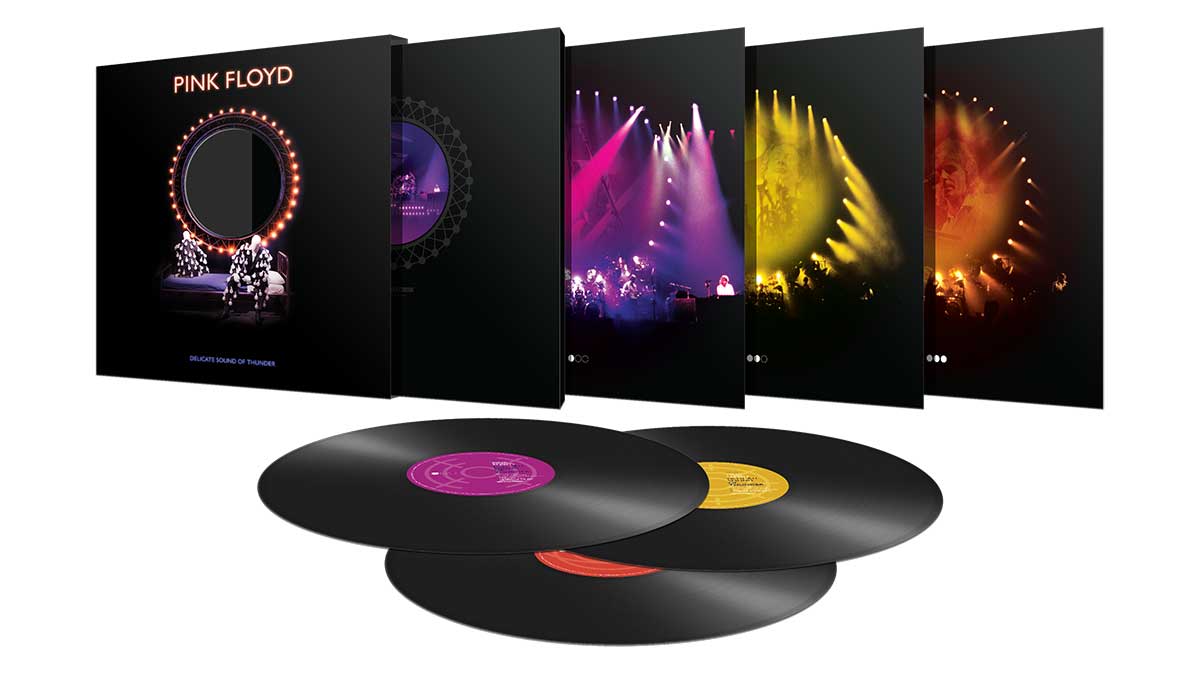 The Pink Floyd of the late 1980s was an altogether different proposition to the band that had grown to prominence since the late 1960s. After ‘The Final Cut’ in 1983, frontman, bassist and lyricist Roger Waters quit to go solo, assuming that without his stewardship, Pink Floyd would quietly die. Feeling himself suddenly liberated, lead guitarist David Gilmour had other ideas. Following an infamously bitter legal wrangle over the rights to record as ‘Pink Floyd’ (Gilmour won), the band carried on without Waters and charted a new direction.

‘Delicate Sound of Thunder’ has been re-released, remixed with input by David Gilmour. It is presented in 5:1 surround sound and with nine additional tracks and is available on 3-LP, 2-CD, Blu-ray and DVD. It is a live performance from 1988 that excitingly combines the old with the new, which is what makes the backstory so important. The late keyboardist Richard Wright, sacked by Waters, was back in the band. Included for the first time here, he performs his best-loved contribution to the Floyd canon, ‘The Great Gig in the Sky’. Nick Mason remained as dependable as ever on drums. With Waters gone, Gilmour stepped up to front the band. Leaning heavily on tracks from the 1987 album ‘A Momentary Lapse of Reason’, which was the first ever Pink Floyd recording not to feature founding member Waters, ‘Delicate Sound of Thunder’ also wove in classic hits beloved of fans everywhere, dating back to ‘One of these Days’ from 1971’s Meddle album.

The two hour and eleven-minute live set wowed fans, and was recorded for posterity. The video is also worth seeing, because it features many iconic Storm Thorgerson-inspired film visuals, projected onto a large circular screen. You can also admire the outrageous fashions of the period, from bulky, shoulder-padded jackets to mullet hairstyles.

For most fans, it’s the sound that is important, and that can best be appreciated on triple 180g vinyl album. This remix is crisp and clear, and resonates beautifully. The applause and cheers from the live audience add warmth. It has been well-produced and boasts a 24-page booklet.

‘Delicate Sound of Thunder’ retains is freshness, and its sound is bolstered by the army of backing singers and guest musicians who are brought on stage to perform. Fans can’t help but notice an absence of tracks from 1983’s ‘The Final Cut’, the album recorded under fractious circumstances. However, all of their big successes from the 1970s are included. Understandably, The Dark Side of the Moon gets a good airing (‘Time’, ‘The Great Gig in the Sky’, ‘Money’, ‘Us and Them’). There’s also most of the 1975 ‘Wish You Were Here’ album, and ‘Run Like Hell’, ‘Comfortably Numb’ and ‘Another Brick in the Wall Part 2’ from 1979’s ‘The Wall’. Only 1977’s ‘Animals’ is conspicuous by its absence. The rendition of classic tracks will appeal to the purists. Although played live (having been recorded in studio) at a distance of a decade or more, they are encapsulated perfectly, and played with very little deviation from the established album tracks. Everyone will have their favourite, but for me, it’s hard to beat ‘Comfortably Numb’, taken to whole new levels of bombast here.

On the final analysis, ‘Delicate Sound of Thunder’ was David Gilmour’s audacious and successful message, building on the success of ‘A Momentary Lapse of Reason’, to let people know that Pink Floyd was still in business, albeit under new management, and that there was a direct and pure bloodline between the halcyon early days and the present. It worked, and Gilmour proved he could measure up as a charismatic front man and lead singer. Without Waters’ cynicism and spikiness, Pink Floyd is more of a cleaner celebration of the music. It ought to be conceded that, lyrically at least, the newer tracks were not on the same level as the best of Waters, but Gilmour and Wright were talented musicians who put the music front and centre, rather than the words – a complete reversal of the direction Roger Waters took.

‘Delicate Sound of Thunder’ is a fantastic and authentic Pink Floyd live experience for all but the most die-hard of Roger Waters fans. For the average listener and for lovers of every era and line-up of Pink Floyd, it’s a greatest hits compilation live performance from prog rock legends.

In this article:David Gilmour, Delicate Sound of Thunder, Pink Floyd