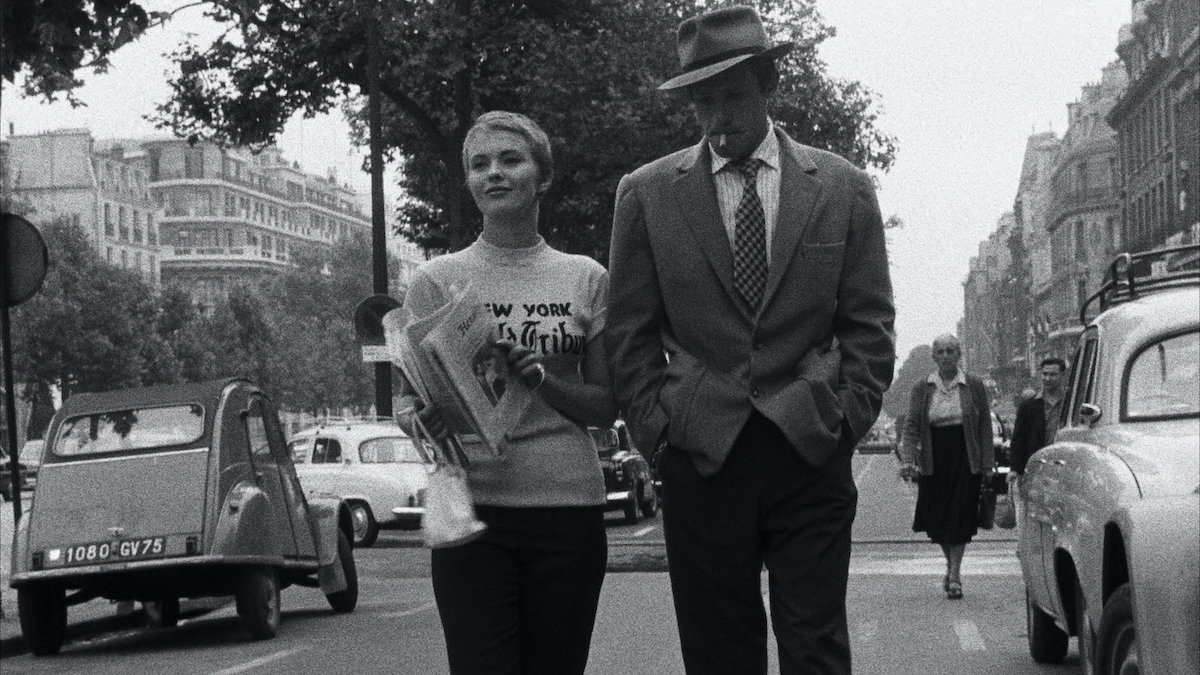 Jean-Luc Godard’s influential masterpiece, and perhaps the defining text of the French New Wave arrives on a new Blu-ray release this week, courtesy of Studiocanal. Expertly restored in a crisp 4K definition to celebrate the film’s 60th anniversary, Breathless (À bout de souffle) may be something of an elder statesman these days, but its status as an iconic moment in modern cinema remains undiminished.

The film follows Michel (Jean-Paul Belmondo), a petty criminal who idolises and imitates Humphrey Bogart. With his fedora, sunglasses, and lip-hung Gitanes cigarette, he is the epitome of Parisian film-noir cool. After killing a police officer in cold blood, he hides with his American girlfriend Patricia (Jean Seberg) and tries to convince her to come with him to Italy.

At times, the film has a mischievous—almost amateurish—feel to it, like it was improvised by a group of kids playing dress up and re-enacting bits from their favourite American movies. Which in a way it kind of was. Godard started shooting with only a rough treatment, and the script was improvised and written as they were filming.

Belmondo and Seberg were both relative unknowns when the film was released, yet despite their limited acting ability became instant icons of the New Wave. The cool detachment from the real world, the ultra-hip outfits, and the enigmatic nature of their relationship makes them utterly fascinating to watch.

Tearing up the rulebook for how a film should be made, Godard changed the very form and language of cinema with Breathless, playfully toying with genre conventions and stylistic methods. Whether this was intentional or simply out of guerilla filmmaking necessity, he produced a film that would shape the styles and attitudes of popular cinema for decades to come.

Shaky camerawork, jump cut edits, breaking the fourth wall, post-modern references, and cine-literate dialogue are all familiar techniques to modern audiences, weaned on 90s indie auteurs such as Tarantino and Soderbergh. In 1960 however, this was revolutionary. Imagine both this and Psycho being released in the same year. Two films that literally changed film forever.

To accompany this special edition release, there is a fine selection of bonus features. The best of the bunch is Still Not Breathless, a 30-min documentary with the great and the good of French cinema waxing lyrical and reminiscing about À bout de souffle. Contributors include Guillame Canet, Albert Dupontel, Christophe Lambert, Michel Hazanavicius, and Jean-Paul Belmondo himself.

There are two critical introductions to the film. The first is from film scholar Colin MacCabe, who places the film into social and historical context. The second is from Dazed magazine founder Jefferson Hack, who passionately speaks about the iconic style and cultural influence of Breathless.

Chambre 12, Hôtel de Suède is a fairly ponderous feature length TV documentary from 1993, featuring journalist Claude Ventura visiting the key location from the film in the days before it is demolished, and speaking to people who participated in the shooting of the film.

Much more interesting is Tempo, a TV episode from 1965 profiling Godard. This is a terrific archival piece, not just as a bio of Godard and a reflection on his most famous film, but also as an overview of the French cinema scene in the 50s and 60s, and how the art form was intellectualised by the Parisian critics who would lead the New Wave.