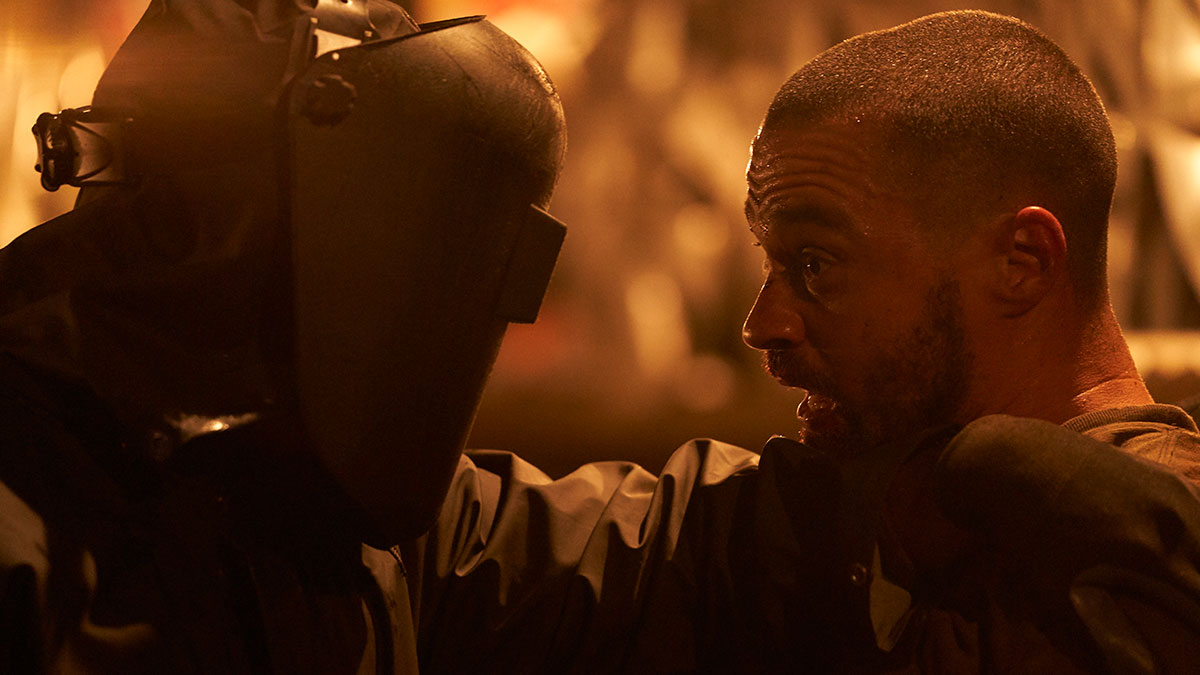 Comic book creator Todd (Jesse Williams) is struggling to figure out how to end his Slasherman series. With an impending promo trip to promote the series, Todd enlists girlfriend Kathy, his business partner Ezra (Jay Baruchel) and assistant Aurora (Niamh Wilson) to join him on a road trip as he seeks inspiration. Not long after they set off, a killer in a welding mask begins to kill people in ways that Todd included in Slasherman and he sets his sights on the foursome.

Random Acts of Violence is the latest directorial outing for Jay Baruchel, who also stars in a supporting role. It’s a stylised and brutal meta-horror that both aims to entertain with bloody-thirsty kills and comment on the genre’s impact. Early on we learn that Kathy is writing a book to give voice to the victims of the real-life Slasherman whom Todd has based his comic series on. This creates friction between the couple with Todd believing that Kathy is criticising his creation.

As Todd and his friends hit the road, Todd is faced with questions over the effect that his work may have had on those who consume it. At one point he’s verbally attacked by a hostile radio host and he begins to wonder whether something he sees as mindless entertainment, could actually be contributing to the escalating violence in America. It’s an interesting discussion and one that has long since dogged the horror genre, a genre that has been used as a scapegoat for many a heinous crime.

The kills in the film come thick and fast, and Baruchel decides to stage them unflinchingly. A young trio attacked in their car is actually pretty harrowing as the masked killer slices and dices his way through their bodies. The tension is palpable and I have to say it’s the first time a horror film has grabbed me to the point where I daren’t blink incase I miss anything in quite some time.

Throughout the film memories from Todd’s past begin to surface and there’s a deeper connection to what’s going on, but to reveal more would ruin the film’s ace up its sleeve. The climax is a tad confusing, and it’s not wholly satisfying, but it’s most definitely unexpected and designed to catch you off guard.

Jesse Williams is excellent in the lead role. It’s nice to see him get the chance to carry a film and show that there’s more to him than his Grey’s Anatomy character Dr. Jackson Avery. He’s a capable actor whose good looks have perhaps hindered more than helped but here he proves he can more than carry a film. Sadly the characters around him are little more than two-dimensional fodder for the killer and there’s a complete lack of chemistry with co-star Jordana Brewster.

It’s true to say that Random Acts of Violence isn’t perfect but for a slasher fan, it’s a whole lot of fun. The deaths are imaginative and memorable, the style of the film is created brilliantly and there’s a solid lead performance from Jesse Williams. If you pick at the story you’ll find things to complain about but if you take it for what it is, you’ll find a horror film that is thoroughly entertaining and poses some serious questions about the impact of the genre in society.