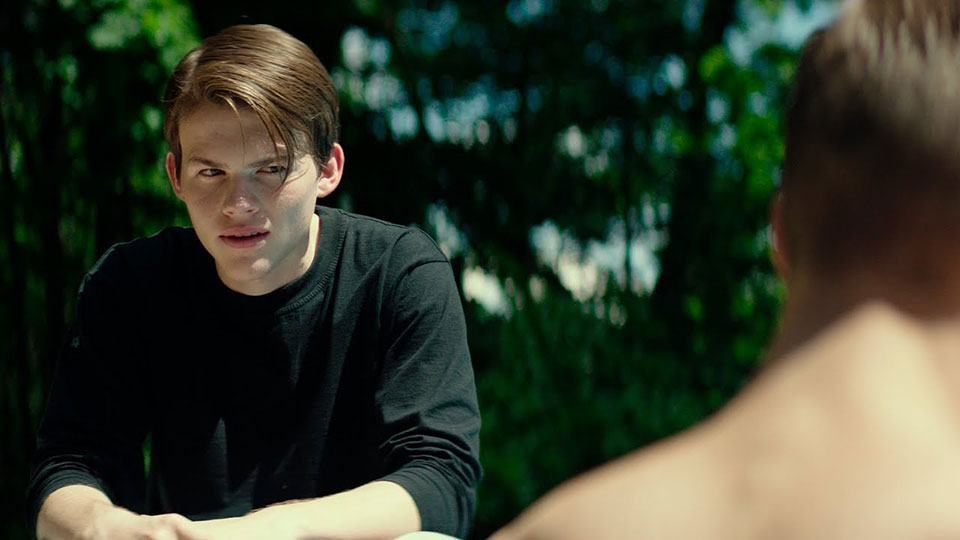 Teenagers Franky Winter (Josh Wiggins) and Ballas Kohl (Darren Mann) have been best friends since they were kids. Classmates and both on the swim team, the boys are inseparable and confide in one another about losing their virginities with their respective girlfriends. Following a 17th birthday party, the boys are involved in a confrontation with some bullies and after making their getaway they return to Franky’s house. In the night the two have an unexpected sexual encounter, which drives their friendship apart and sees the former best friends pitted against one another.

Giant Little Ones is a refreshing twist on the classic coming-of-age story that is so prevalent in gay cinema. Rather than being purely a struggle to come to terms with sexuality, the film is actually an exploration of what happens when two friends cross the line without either knowing how the other really feels. Franky is taken by surprise, but not completely unhappy, by what happens with Ballas but Ballas becomes angry and spreads rumours, with the help of his girlfriend, that Franky initiated the encounter.

With the whole school finding out what happened between them, and most of them believing what Ballas has told them, Franky finds himself outcast and his girlfriend dumps him. As Ballas strides around the school trying to prove his masculinity, Franky uses the situation to take an inward look at his life and explores his fractured relationship with his gay father Ray (Kyle MacLachlan) as well as revisiting a relationship that never really started with Ballas’ sister Natasha (Taylor Hickson).

Writer/director Keith Behrman doesn’t take you to the places you think he’s going to at the beginning of the film. Giant Little Ones isn’t a love story between two closeted teenage boys that gets a happy ending. Instead it focuses on exploring the confusion that comes from sexual experimentation and looks at the ways people deal with it. It also looks at what it’s like for a teenager when their world is unexpectedly turned upside down by a seemingly random act that can’t be undone.

Josh Wiggins and Darren Mann are superb as the central characters. Wiggins ensures that Franky is a character you can root for, even if the characters around him are being horrendous to him, while Mann’s brooding and handsome Ballas showcases the damage that can be caused by someone refusing to acknowledge their own identity. Taylor Hickson offers a little bit of relief from the main storyline as Ballas’ slut-shamed sister who has been working through her own troubles, and is one of two people that actually offers Franky any support.

The DVD release features a behind-the-scenes featurette with the cast and creatives talking about the making of the film and the inspiration behind the story.

Giant Little Ones is an engaging and, at times, emotional watch. I really felt that Behrman did something interesting and he created a story that feels familiar but takes you in a different direction than you’ve been before. Coming-of-age stories are rife in the gay cinema genre but few are handled as expertly as this one, and the fact it’s not all wrapped up in a nice bow by the end credits, makes it feel all the more realistic.