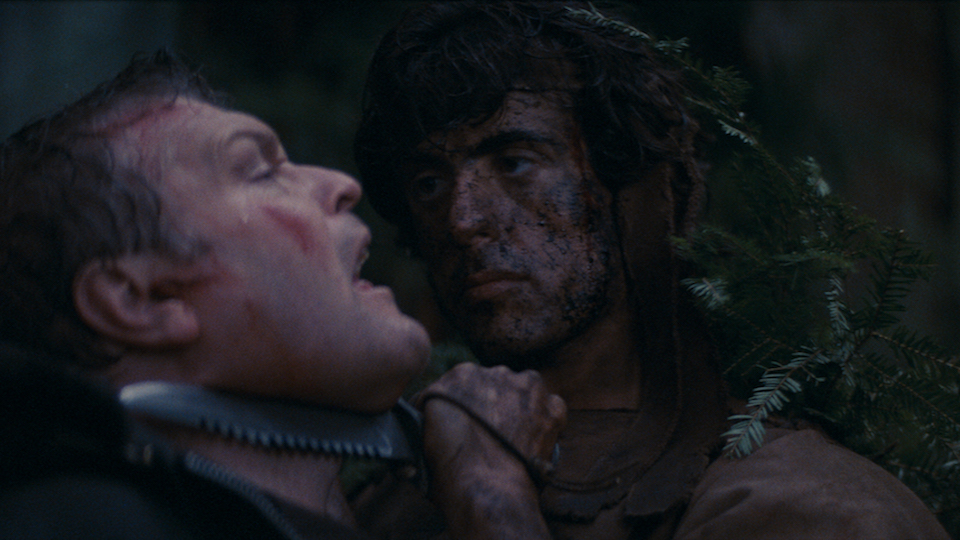 The name Rambo has been in the cultural lexicon for decades now. First introduced as the lead character in David Morrell’s 1972 novel First Blood, the name Rambo is now used as shorthand for gung-ho American patriotism, violent machismo, and right-wing military ideology. Even people unfamiliar with the films will know the name, and the muscle-bound steroid pumped image of 80s American awesomeness it evokes.

But before all that there was First Blood. Directed by Ted Kotcheff, it is a low budget thriller about John Rambo (Sylvester Stallone) a traumatised veteran of the Vietnam war, who goes on the run after being brutalised at the hands of a local Sheriff (Brian Dennehy) and his deputies. Hunted like an animal, he uses his combat skills and knowledge of guerrilla warfare to turn the tables on his aggressors. Largely dismissed by critics when it was released in 1982, it was a huge box office success and ended up launching the franchise that would eventually turn Rambo into a cultural icon.

In the intervening decades, First Blood has had something of a critical reappraisal, and is now quite rightly considered one of the most important films about Vietnam, and the impact it had on the national psyche. Whilst such heralded films as Apocalypse Now, Platoon, and The Deer Hunter showed us the horrors of the war, First Blood – whilst still being a thrilling action movie – takes us on a journey to America’s heart of darkness. An America still haunted by guilt and failure over what happened in Vietnam. An America still scarred by Nixon and Watergate. And boy do they take it out on the wrong guy.

It’s a remarkable film, and endlessly watchable. Sylvester Stallone, Brian Dennehy, and Richard Crenna as Colonel Trautman (Rambo’s commanding officer from ‘Nam), are all fantastic in their own way, and each bring something unique to the film. Dennehy is essentially ‘the Man’. He is the establishment, he is the authority, he is the guy keeping you down, and kicking you if you should even dare to move. If Sheriff Will Teasle survived the end of this film, you can bet your life he would have become a Republican politician. Crenna meanwhile gets the films best entrance – appearing as an imposing silhouette at the door of Teasle’s manhunt command centre – and all the best lines too. When Teasle tells Trautman he plans to send 200 men after Rambo, the Colonel tells him not to forget one thing: “a good supply of body-bags.” Ah, classic Trautman.

But this is Stallone’s film. A huge star after the success of the first two Rocky films, he barely says a word for the entirety of First Blood. It’s only in the last ten minutes when we finally see the character open up, and it is an incredible sequence. I can’t think of many other big action films or big Hollywood actors, that would have the guts to end the film with the main character breaking down and crying in the arms of his old army buddy.

Though the sequels would all have slightly off-key endings, none of them matched the final scenes in First Blood. Knowing what 80s action movies would morph into – and the Rambo sequels are two of the main culprits – it still amazes me that they went with such a bold ending. But it’s the right ending. Anything else would be a complete betrayal of the character, and the tone of the film.

Which brings me neatly onto the sequels. The snappily titled Rambo: First Blood Part II, directed by George P. Cosmatos, picks up the action three years later. Trautman offers Rambo a way out of jail, if he goes on a solo infiltration mission in Vietnam, where they suspect American POWs are still being held captive. Things go awry from the outset, and Rambo ends up running around the jungle with his shirt off, killing everyone he sees with a bow and arrow and a bloody big knife.

I unashamedly love this film, but it is a radical departure from the first. All the nuance, emotion, and subtext of First Blood has been replaced by muscles, bazookas, and silliness. It was another huge box office hit, and if you take it for what it is, and let it exist as a film separate to First Blood, then it’s a cracking 80s action movie. But for all its gleefully violent charm, the film swerves into some desperately dishonest, offensive and exploitative areas. But hey, this was Reagan’s America, an era when everyone wins. Even the wars they actually lost.

Rambo III arrived in 1988, and is even more of a cartoon that its predecessor. Everything that was once good about Rambo has been buried under steroid pumped pecs and massive hair. The plot sees Trautman leading a secret mission in Afghanistan, which goes badly wrong, and he is captured by the Soviets. Naturally the US government has only man they can turn to in this situation.

The film is poorly paced, and as ludicrous as it is dull. It does however have two noteworthy things going for it. The bonkers scene of self-surgery using gunpowder and fire being one them. The other is watching it with historical hindsight, and seeing Rambo (who at this point has become the ultimate symbol of right-wing American patriotism) riding into battle with the Afghan Mujahideen.

So what of these new 4K restorations I hear you ask. Studiocanal have overseen an excellent transfer of the three films, though it barely registers on the muted, earthy tones of First Blood. The much brighter sequels – with their verdant jungle-scapes, scorched deserts, and massive explosions – are a more natural fit for the UHD treatment, and look great as a result.

Each disc comes with a generous selection of special features, though they vary wildly in quality. Across all three discs is a documentary called Rambo takes the 80s – which is split into three parts. It has been produced exclusively for this release, but it is not exactly riveting stuff. It’s a collection of talking head contributions from a fairly random cross-section of folk – some who are connected to the film and some who just like it. If I’m completely honest, were it not for David Morrell being involved, it would be like one of those Channel 5 clip shows.

The films are each accompanied by audio commentaries. First Blood has one with Sylvester Stallone, and another with David Morrell. First Blood Part 2 has a director commentary from George P. Cosmatos, and Rambo III has an audio track with director Peter MacDonald. All the discs come with original trailers and TV spots, and brief before and after featurettes showing off the excellent restoration work.

The majority of the special features across all three films are then plucked from the 2002 special edition DVD. These include interviews and making-of documentaries which feature all the main cast and crew. These are interesting and offer some fascinating insight into the films, but there’s no on set footage. It’s more interviews interspersed with clips from the films.

Also from the 2002 DVD are some documentaries about Vietnam itself – the war, the real soldiers, the heroes and POWs. They’re included to add perspective to the films, which to a certain extent they do for First Blood. But for the slightly offensive sequels – to quote This is Spinal Tap – there’s too much fucking perspective now. Watching interviews with real Vietnam veterans (albeit most of them are career soldiers and not enlisted grunts) alongside the exploits of Rambo seems a bit distasteful.

The worst of the features across all three films is a workout regime entitled How to Become Rambo. I don’t know who that is aimed at, but it certainly isn’t this reviewer. The best stuff on the discs is probably the deleted scenes and alternate takes. First Blood includes the alternate ending which sticks closer to the book, and also has an absolute belter of a deleted scene. I am so glad they cut it out though, because it would have killed the film. It features Rambo having a flashback to his time in ‘Nam. He is rocking a majestic handlebar moustache, and enjoying some sexy time at a Saigon brothel. It was a tremendous decision to leave it on the cutting room floor.

The Blacklist season 6: 10 things we want to see

10 things we want from The Blacklist season 5