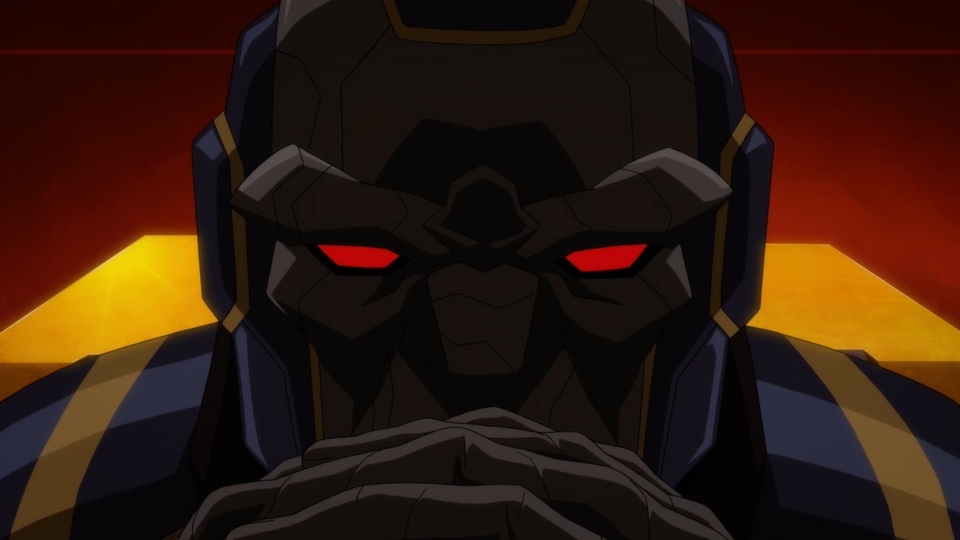 DC’s animated series of films has delivered some really memorable moments over the last few decades. This current iteration of the DC Universe draws to a conclusion here with Justice League Dark: Apokolips War, an epic and brave finale that is packed to the rafters with action, adventure, surprises and shocks.

The plot finds the heroes (and some villains) of Earth facing their gravest challenge yet. With reports of an imminent attack on the planet, Superman (Jerry O’Connell) takes a crew to face Darkseid (Tony Todd) head-on in a bid to save humanity. But when things go wrong, the whole fabric of the DC Universe is shaken to its core, leaving a dejected band of heroes the impossible task of mounting a final stand against the forces of darkness.

What grabs you first is the sense of risk and escalation that this story projects. Literally from the opening scenes a high-risk factor is established, and this keeps its momentum throughout the film, making each scene a pivotal and interesting watch that serves the greater story. The 90min runtime is lean and full of action, and the events of the movie keeps die-hard fans of the DC Universe happy whilst also being easy to follow for anyone not familiar with all the ins and outs of the lore.

Like I said before, Justice League Dark: Apokolips War has a real sense of danger and ominous, foreboding dread running nicely throughout. As a viewer, you really cannot tell how the outcome will play out and that makes for a refreshing watch. There are obvious comparisons with the events that take place in Marvel’s Avengers: Endgame. It too features a desperate band of surviving superheroes trying to bring down a greater evil for the fate of the world. The DC heroes here have a bit more baggage with them though which cultivates some great, tension-filled scenes between them.

The roster of familiar faces is big here, with heavyweights like Batman, Superman, Wonder Woman and Harley Quinn sharing the screen with the likes of John Constantine, Raven, Bane, Trigon, Captain Boomerang and King Shark. There are a lot of famous faces here and for the most part, everyone has a chance to shine onscreen. But be warned, there are a few deaths on the cards here too, which means that a level of unpredictability shadows everything you see and that makes for a great watch.

This is almost relentless in the action stakes and therefore it’s a joy to watch. From daring battles on Earth and in Space to Lois Lane ‘fight-clubbing’ Harley Quinn in an underground boxing ring, Justice League Dark: Apokolips War isn’t shy to shed the blood and celebrate the carnage of a war movie. And that is what this is – a war movie with casualties everywhere that keeps you on the edge of your seat.

The vocal cast are all superb and do exceptionally well here. The regular stalwarts all reliably deliver like Rainn Wilson (Lex Luthor), Jason O’Mara (Batman), Rosario Dawson (Wonder Woman), Rebecca Romijn (Lois Lane), Christopher Gorham (The Flash) and Jerry O’Connell (Superman) but the less mainstream characters do a lot of the heavy lifting here too. Matt Ryan reprises his role as John Constantine once again, and in many ways leads this movie (very well). Voice acting hero John DiMaggio is always a joy to listen to as King Shark and Trigon, Taissa Farmiga is brilliant as Raven, Hynden Walch is a joy as a maniacal Harley Quinn, and Tony Todd gives Darkseid the correct level of sinister malevolence to keep the stakes high throughout the story.

With high-emotion balancing out nicely with the all-out action, Justice League Dark: Apokolips War is a surprisingly poignant and memorable way for this animated DC Universe to bow out. With DC actively moving in interesting directions, I’m not sure what we have coming up next, but if their current iteration of Harley Quinn is anything to go by, we are in for a treat. Seriously, if you haven’t watched the Kaley Cuoco and Lake Bell starring series yet, you are massively missing out on one of the freshest and funniest shows in years. So the future looks bright for DC animation, and Justice League Dark: Apokolips War makes sure the final film in its series delivers a suitably awesome finale for fans to say goodbye, and provides a platform to launch new and exciting ventures from.