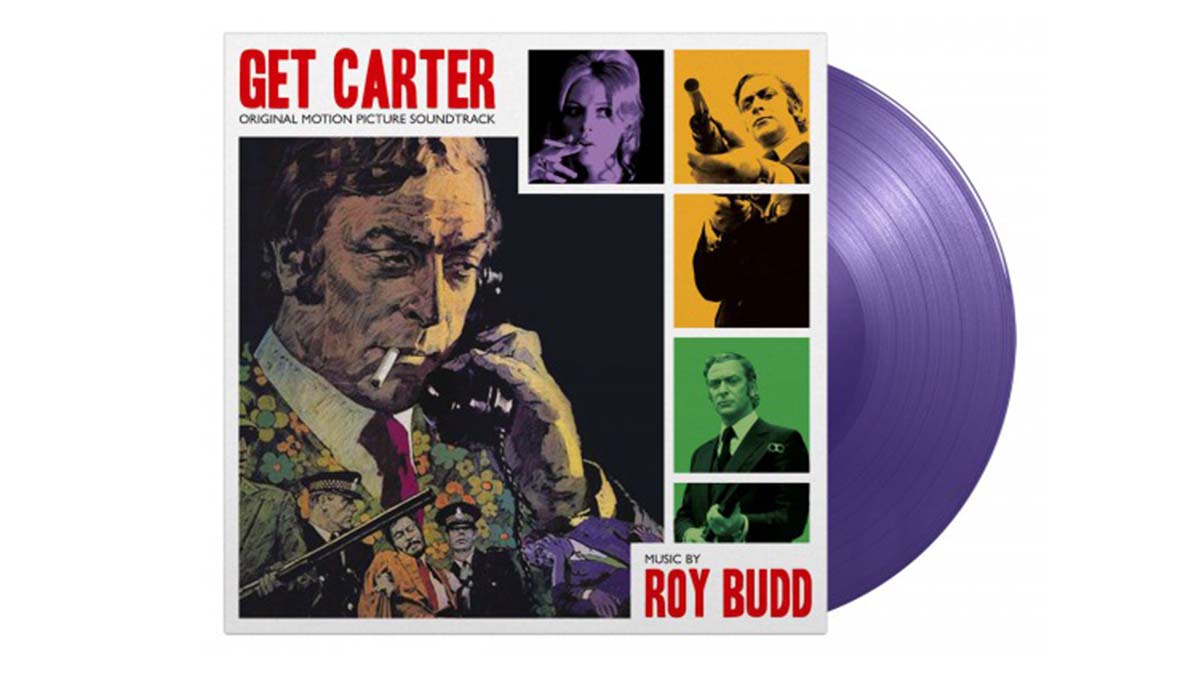 The iconic status of the classic 1971 British gangster film ‘Get Carter’ is down to its many converging strengths. Star Michael Caine, already bankable thanks to playing Harry Palmer in Len Deighton thrillers such as ‘The Ipcress File’ and the lead in ‘The Italian Job’, positively glowers off the screen as Jack Carter, the titular anti-hero of this piece. It’s a tight script, imaginatively brought to life by visionary director Mike Hodges, who made the bleak North East England locations an integral part of his story.

And then there’s Roy Budd’s music, which has now been released on purple vinyl by Music on Vinyl.

Budd, a young man at the time of the commission, used his experience as a jazz musician and composer to create something truly memorable. The resulting cool jazz suite encapsulates the transitional period of the late 60s and early 70s, when the psychedelic romanticism of flower power was giving way to the much earthier and edgier sounds of an altogether more troubled and uncertain decade.

The intro introduces us to the distinctive ‘Carter theme’ notes played on the Wurlitzer electric piano. It’s not until we reach the third track, ‘Main Theme – Carter Takes A Train’ that we hear that instantly-recognisable bassline plucked on the double bass. The percussion and Wurlitzer electric piano (along with standard piano) combine to perfectly accompany the images on the screen of Carter taking a train journey from London to Newcastle. We don’t know at the time that we’re watching a revenge thriller, and that the hero is returning to his home town (despite Caine’s undisguised London accent, but let’s not quibble), to find and kill his brother’s murderer. All we know is that adventure is promised, and the character we’re following is compelling, probably dangerous yet seductively cool. The music reflects his personality.

Other tracks such as ‘Getting Nowhere in a Hurry’ expand on the jazz suite theme, providing different tempos. There are also three accessible songs on the album: ‘Looking For Someone’, ‘Love Is A Four Letter Word’ and ‘Hallucinations’. There are one or two duff lyrics contained within, but nobody’s paying attention to them whilst the film is running.

Excepts of dialogue from the film are interspersed between the original music tracks. Even from a highly-quotable film, all of the best-loved lines are included. There’s the excruciatingly tense exchange between Carter and Eric (Ian Hendry) at the race track. “I’d almost forgotten what your eyes looked like. Still the same. Pissholes in the snow.” Then there’s the vaguely comical scene that results in Caine’s legendary delivery of, “You’re a big man, but you’re in bad shape. With me it’s a full time job. Now behave yourself.” The “drink up, Eric” lines tee up nicely the funereal ‘Goodbye Eric!’ which contains an ingenious use of the organ.

A vital component of truly great cinema is a soundtrack that takes the film to the next level. With ‘Get Carter’, Roy Budd certainly achieved that. The main theme is the melody that everybody remembers, and once you hear it on glorious 180g vinyl, it’s certain to rattle around in your head for days. But the score in its entirety stacks up and guides our emotional responses to the actions on screen. Perhaps most importantly, the music, inseparable from the film that gave it life, is nevertheless enjoyable in isolation from the images it so brilliantly accompanies. Sadly, Roy Budd died at the young age of 46. The superb ‘Get Carter’ soundtrack is his lasting legacy.

This limited edition 180g purple record from Music on Vinyl is presented in gatefold format. The inside sleeves have colour and black and white production photographs from the film. As well as Michael Caine, other much-loved British actors including George Sewell and Tony Beckley are depicted. There are reminiscences about the making of the film from some of the surviving talent. Contributors include director Mike Hodges, pre-Blockheads Mickey Gallagher and Johnny Turnbull, who joined Budd as vocalists, drummer Chris Karan and bass player Jeff Clyne, as well as film critic Jonathan Ross. There’s also a touching biographical tribute to Roy Budd himself.

The original soundtrack to ‘Get Carter’, with its urbane and slightly unsettling jazz suite, is among the most iconic of cinematic scores, and it sounds fantastic on heavy vinyl. It’s sure to make you want to experience Jack Carter’s violent Newcastle homecoming all over again!

Tracklist: Side A: 1. Get Carter Intro 2. Dialogue “Is There A Mr. Carter In The Room?” 3. Main Theme – Carter Takes A Train 4. Dialogue “Do You Know A Man Called Albert Swift?” 5. Looking For Someone 6. Dialogue – The Race Track 7. Something On My Mind 8. Dialogue “Who Killed Frank?” 9. Getting Nowhere In A Hurry 10. Dialogue “Tell Me About The Girl” 11. The Girl In The Car 12. Dialogue “I Fancy You” 13. Love Is A Four Letter Word 14. Dialogue “You’re Lucky. They Kill As Well” 15. Livin’ Should Be This Way Side B: 1. Dialogue “All It Takes Is One Call To The Police” 2. Manhunt 3. Dialogue “Drink Up: Eric” 4. Goodbye Eric! 5. Dialogue “I Want You To Listen Very Carefully” 6. Hallucinations 7. Dialogue “You’re A Big Man But You’re In Bad Shape” 8. Plaything 9. Dialogue “Stay Away From The Car Or I’ll Blow You Apart” 10. Goodbye Carter! 11. Dialogue “Talk Or I’ll Kill You” 12. Hallucinations Instrumental 13. Getting Nowhere In A Hurry Instrumental Record label: Music on Vinyl Release date: 8th April 2022 Buy ‘Get Carter’ now