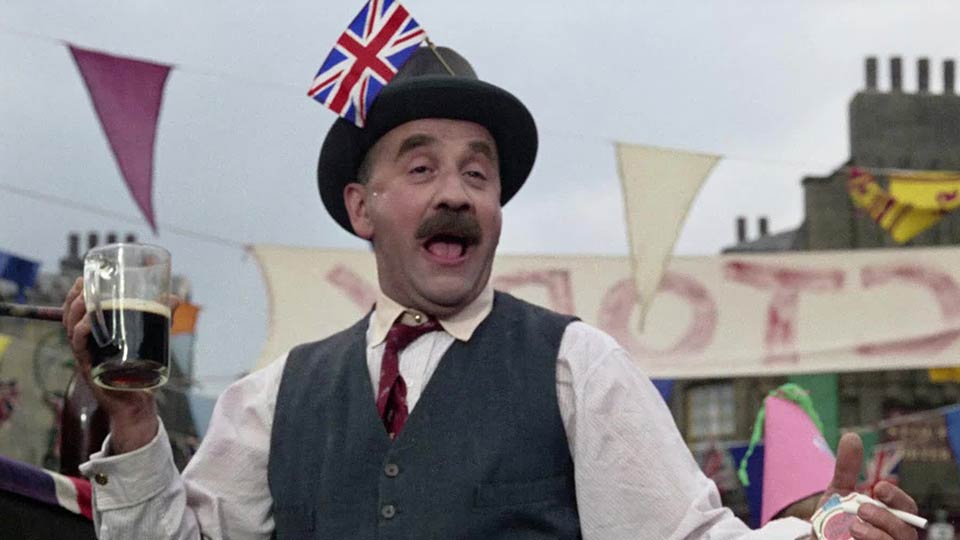 The immortal character of Alf Garnett as played by Warren Mitchell represents a section of society that’s never allowed to be part of British culture any longer – the aspirational and patriotic working classes. Certainly there’s a strong element of satire to Johnny Speight’s extraordinary creation. You’re not meant to agree with Garnett’s over-cooked or naive assertions – but where the tactic now is for writers to take a sledgehammer to political points and to expunge nuance for fear that viewers may believe them to endorse the views of ordinary people – writers during earlier epochs could sketch great characters that you could laugh at, or with (to taste), and allowed characterisation to take precedence over the writer’s impulse to virtue signal through black and white depictions of “good” and “bad” people.

Our cautionary note is that a retrospective eye is needed to understand Till Death Us Do Part, and to appreciate its historical context. It was made at a time when writers dangerously allowed their characters to speak for themselves. It is to state the obvious that Till Death Us Do Part would not be made in these censorious politically correct times. Yet more’s the pity, since the subject matter is eternal. Alf Garnett is an ageing and frustrated Londoner who remembers the deprivations of World War Two, but who has slowly worked his way up to owning his own house, and who holds strong conservative and mildly religious views. His daughter gifts him a son-in-law who is the polar opposite: an educated atheist socialist, who enjoys riling the easily-combustible Garnett by challenging his convictions. Thus, sparks fly and conflict drives the drama – and opposing world views are afforded equal weight and treated with the same merit.

Till Death Us Do Part the movie appeared in 1969. The situation comedy upon which it is based was a mainstay of British television between 1965 and 1975. Whereas some sitcom adventures on the big screen have been disappointing (Rising Damp is the obvious example), finding it almost impossible to break out of the thirty-minute sitcom format and sustain story and character over an hour and a half, others found clever ways of reframing the domestic to give audiences a fresh angle on cosily familiar characters.

Pleasingly, Till Death Us Do Part falls squarely into the latter category. Speight’s ingenious idea is to tell Garnett’s story chronologically, setting the first half of the film around the time of WWII, two decades before the Alf Garnett we know and love was first introduced. Not many films can get away with depicting two men using neighbouring outdoor lavatories (there’s a lovely cameo by Bill Maynard as Garnett’s neighbour), but this is entirely suited to explaining what shapes Garnett’s character. It’s not until the second half of the film that we meet his daughter Rita (Una Stubbs) and son-in-law Mike (Anthony Booth). Mitchell was in fact only five years older than Booth, though they play characters at least a generation removed from one another. Garnett in the earlier scenes is simply Mitchell with less make-up! Simple, but brilliantly done. From that point on, the film centres around the eviction of East Enders from their original homes to nondescript new towns – itself a social commentary on domestic policies of the Labour government in the 1960s.

The production values are very good. Most of the action takes place within the exterior set of a row of pre-war terraced houses that capture the period with great attention to detail. The film belongs to Warren Mitchell, who grasps the opportunity to give audiences a fresh insight into Alf Garnett. Everyone knows someone grumpy, socially awkward and highly opinionated who’s likely to embarrass their loved ones by creating arguments no matter what the event; but Mitchell’s genius is to make viewers enjoy rather than endure time spent in the company of such a character.

Mitchell is, as with the TV series, ably supported by Dandy Nichols as his long-suffering wife, Else, whom he often dismisses as a ‘stupid moo’. Nichols underplays scenes beautifully, allowing Mitchell to ramp up through the gears – but never at her expense. The deftness of her delivery cannot be under-appreciated. She is the perfect foil. Una Stubbs and Anthony Booth fulfil their functions as the younger generation well too, though Stubbs with far greater conviction.

Fans of British actors of the era will enjoy spotting a few familiar faces. Brian Blessed appears as a soldier, though he is weirdly dubbed, perhaps to sound more cut-glass in his accent than his natural bass rumble would allow. Look out also for Michael Robbins and Geoffrey Hughes.

If the film sags at all, it’s during an unnecessarily protracted trip to see England triumph at the 1966 World Cup Final, which serves to bring Alf and Mike closer together, at least temporarily. There’s also a bizarre dream sequence in which Garnett meets the Queen and is asked to sort the country out, but at least that moment is quite funny! The racist terminology that was common parlance at the time, but which leave a bad taste in the mouth now, may prove too much of a barrier to some to be able to enjoy the film.

Till Death Us Do Part was enough of a success at the time to spawn a sequel in 1972 (The Alf Garnett Saga), and it’s easy to see why it was a hit with viewers. Revisiting it now, and seeing it in the context of the society in which it was produced, is an enjoyable experience. Alf Garnett is one of the great anti-heroes of British comedy.

An excellent extra feature on the disc is the episode from the sitcom (Sex Before Marriage), which has only recently been recovered, and therefore hasn’t been seen for nearly half a century. Seeing Garnett in his natural black and white videotape habitat is a stark but enlightening contrast. In it, Alf deals with a dodgy milkman who has mates who can lay their hands on items that fall off the back of lorries, and later attempts to hang some wallpaper. Will the effort be worth it if he can persuade Else that he managed it all by himself?