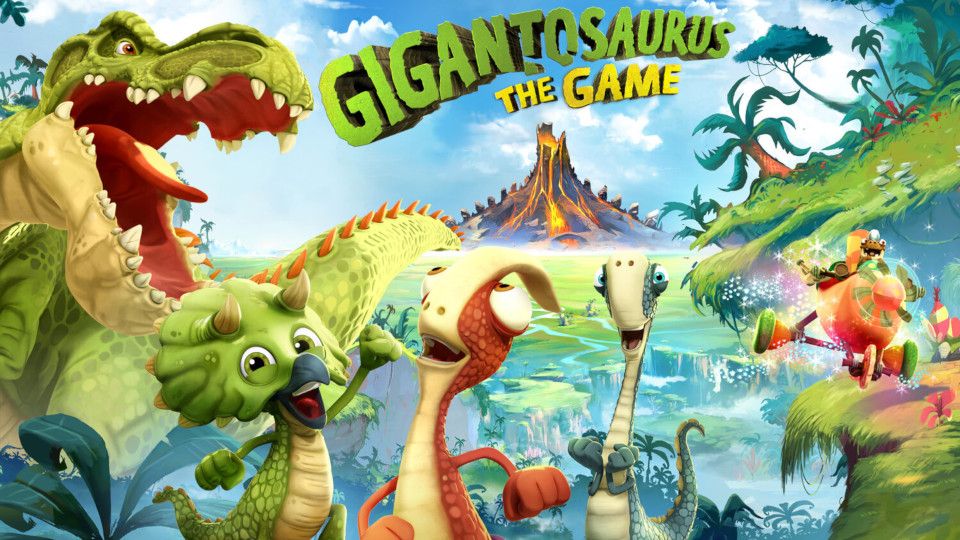 Gigantosuarus the Game is based on the books and TV show of the same name. It’s a 3D platformer with a few added racing elements where players are tasked with collecting stuff in an attempt to aid Giganto and avoid extinction.

Players can control dino Buddies Rocky, Tony, Mazu and Bill who each have their own unique skills and you’ll need to swap between them in order to complete the game. Whilst clearly aimed at a younger audience the game features a multiplayer mode where up to 4 players can drop in and out meaning families can play together.

Watch the Gigantosaurus launch trailer below:

The main focus of the game is simply to collect various items and take them back to various points on the map. The items can range from eggs that need returning to nests, seeds to plant or randomly collecting walnuts for Giganto himself. Regardless of what you’re collecting the gameplay itself doesn’t really change a great deal.

You’ll mostly be finding yourself navigating a 3D world taking on obstacles and jumps that get harder as you progress. There will occasionally be the odd enemy to try and stop you but this definitely isn’t a game about combat. You will be led to the next item on your list by a glowing pink trail but you can divert from the trail to fully explore the environments.

To look at, the game is nice and bright with lots of vivid colours but these can get washed out once you engage the multiplayer mode. Once there’s more than two of you playing the camera zooms out rather a lot making it hard to keep track of your own character. As there is no option of split-screen it also means that you have to stick pretty close to other players.

The multiplayer makes things even worse with its attempts to guess which player is to be classed as the lead player. If players get too far apart, all of the players are teleported to the lead player and quite often the game gets this wrong. The multiplayer side of things would have worked much better with a split-screen option such as that seen in the lego games.

The platforming itself is also overly hard, especially when in multiplayer given all of the dodgy camera angles on offer. My six-year-old and I spent about 30 minutes just trying to get through one series of three jumps as one of us would keep messing up. After finally completing the ordeal we ended up on a platform full of bees that would cause us to lose control of our characters, fall off the platform and be forced to begin the process again. Not fun, not one little bit. Sadly this seems to be the case for most of the game.

A nice respite from the platforming levels is the race stages that take place in between each platform level. Strangely split-screen is present in these Mario Kart influenced race stages meaning all of the players can play quite comfortably on the same screen. Why this option doesn’t exist in the platforming stages is beyond me. Whilst a nice break there are only five different race stages and once you’ve collected everything from each there you won’t be inspired to play again.

All in all, Gigantosaurus was a bit of a disappointment. It’s clunky controls, bad camera angles and poor multiplayer made it more frustrating than fun to play. The race stages were fairly decent but not good enough to lift the game as a whole. My son summed it up when after a few hours of playing he asked if we could play something else instead.

Gigantosaurus the Game was reviewed using a digital code provided by the publisher.

In this article:Gigantosaurus the Game, Nintendo Switch, Outright Games, PS4, Wildsphere, Xbox One