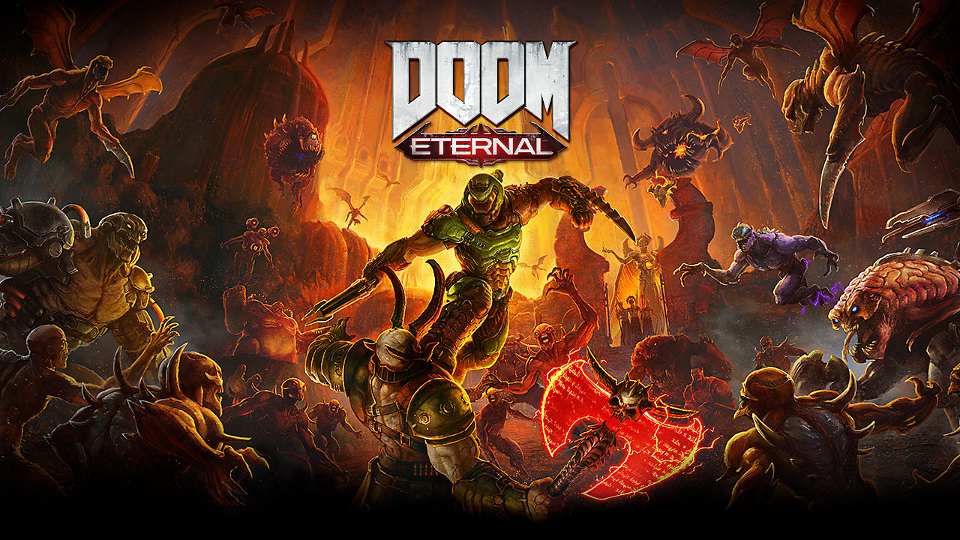 Doom Eternal is a direct sequel to the Doom reboot that was released back in 2016. If you’ve played through the previous game then you’ll find that much of what’s on offer here will feel instantly familiar. It’s not simply more of the same though as there’s plenty of changes and new features to keep you entertained.

Powered by id Tech 7, the world of Doom has never looked so good. The game obviously looks and plays best on a high-end PC but it’s also no slouch on consoles. They do lose some visual fidelity but it’s necessary to keep the action silky smooth.

Continuing the story from Doom 2016, the Doom Slayer arrives back at Earth to find it overrun with demons. Your mission is quite simply to save the planet by killing them all. Doom Eternal puts more effort into the story than the previous game and even dabbles with the occasional cutscene. Some players might not be keen on these but I didn’t mind them. However I was a little disappointed that much of the story comes from finding and collecting logs which must be read.

Before you begin there’s a variety of difficulties to choose from. These start at I’m Too Young to Die for beginners up to Nightmare for experienced players. If you start too hard or easy you can switch the difficulty on the fly. If Nightmare still isn’t tough enough for you then you can choose one of two permadeath modes – Ultra-Nightmare and Extra Life. In Extra Life you get to play until you’ve run out of lives. More can be found scattered through the campaign and some are so tricky to get to that you risk a life trying to gain one. Ultra-Nightmare simply gives you one life and I’d be very surprised if many players ever get close to beating this mode.

Your base of operations is an orbiting space station known as the Fortress of Doom. It’s basically a hub that you return to between missions to chill out. Here you can view your collectibles, unlock new abilities, test out your weapons and launch new missions.

Most of your time is spent killing the seemingly endless horde of demons that are out for your blood. All the demons from the last game return but they’ve all been reworked or changed to some degree. Many favourites from the past also return such as the Arachnotron, Pain Elemental and Archvile. There’s also plenty of new surprises to keep you on your toes.

The arsenal of weapons is familiar and features everything that you’d expect to see. It’s also possible to mod weapons and to switch mods on the fly with a press of Up on the D-Pad. For example the Combat Shotgun can be turned Full Auto or made to fire sticky bombs. Mods can also be upgraded to make them more powerful and unlocking all upgrades on a weapon leads you to a more powerful mastery ability.

Each demon has a weapon that they are susceptible to. For example you can fire a grenade into the mouth of a Cacodemon to instantly stagger it or use the Plasma Rifle to explode energy shields. Some demons have weak points too such as the turret on an Arachnotron or the arm cannons on the Mancubus. Learning these different weaknesses and how to switch weapons quickly is key to taking them out quickly.

The combat in Doom Eternal often seems quite mindless but it does take some learning and rewards the thinking player. Like the previous game, inflicting enough damage causes a demon to stagger. When this happens you can click the right-stick to carry out a brutal glory kill. These are not for the squeamish but I found them endlessly entertaining. Doing so also gives you health packs.

If you find yourself low on ammo you can grab your trusty chainsaw and cut the demons down. This results in a colourful explosion of ammo for your various weapons. Similarly you can take advantage of your shoulder mounted Flame Belch to set fire to demons which makes them bleed armour shards. A final ability lets you fire Frag Grenades to damage enemies or Ice Bombs to freeze them.

As well as mastering your weapons and learning how to replenish your health, ammo and armour, you must also learn to keep moving. Staying still tends to lead to death very quickly so it’s best to keep moving. Mastering techniques such as back-pedalling and circle-strafing is important. There’s also double-jump and dash abilities.

Many of the environments are quite open allowing you to move around easily. There are also bounce pads and portals to let you move quicker. New movement features include clinging and climbing some walls as well as monkey bars to swing on. With a little practice it’s possible to constantly fight and move.

As cool as these new movement options are they also used in some of my least favourite parts of the game. These are light puzzle sections that involve climbing, jumping, swinging and dashing. At times these are incredibly frustrating and can feel out of place.

Doom games have always had plenty of secrets to find and Doom Eternal doesn’t disappoint. Often you can see a collectible but need to work out how to obtain it. There’s an upgraded map to help you with this. Often they require a combination of the new movement skills or need you to punch through a cracked wall. These secrets include weapon upgrades, runes, extra lives and collectible toys. There’s also Sentinel Crystals which are used to unlock new areas of the Fortress of Doom. Other things to keep you busy include Slayer Gates and Master Levels. These are content designed to challenge even the best players so take some time to overcome.

As well as Doom Eternal plays I did stumble across a few bugs during my playthrough. A few times when backpedalling away from demons while shooting I found myself running through walls. One time this was a corridor full of zombies and I glitched through a gate that had closed behind me. While I could still see the zombies it wasn’t possible to shoot them through the gate. The game needed them to be killed in order to progress so I had to kill the Doom Slayer to restart from the previous checkpoint.

Another bug that seems to happen more frequently was that demons would get stuck. When it happens you can still kill them but they can’t move to come after you. Not game breaking but rather annoying. I found another issue in the Fortress of Doom that wouldn’t let me walk through certain doors that I’d previously unlocked. None of these are game breaking but still a bit annoying.

In addition to the single player campaign, Doom Eternal features an online multiplayer mode called Battlemode. One player takes the role of the Doom Slayer while two others get to play as a selection of demon which currently includes the Archvile, Pain Elemental and Revenant. The Doom Slayer gets access to all his weapons and mods, while the demons have their unique abilities and can also summon other AI controlled demons. It’s an interesting mode but I was disappointed not to also find standard deathmatch and the SnapMap editor from the previous game.

Overall Doom Eternal is an absolute blast to play. The campaign lasts a decent 15 hours on the first run but there’s plenty of reasons to return. The higher difficulties are much more rewarding and there’s no way you’ll find all the collectibles and secrets on your first run. The multiplayer isn’t for everyone but it’s nice to see something different. Hopefully that will be expanded upon over time while we wait for the inevitable third game.

Doom Eternal was reviewed using a digital code provided by the publisher.