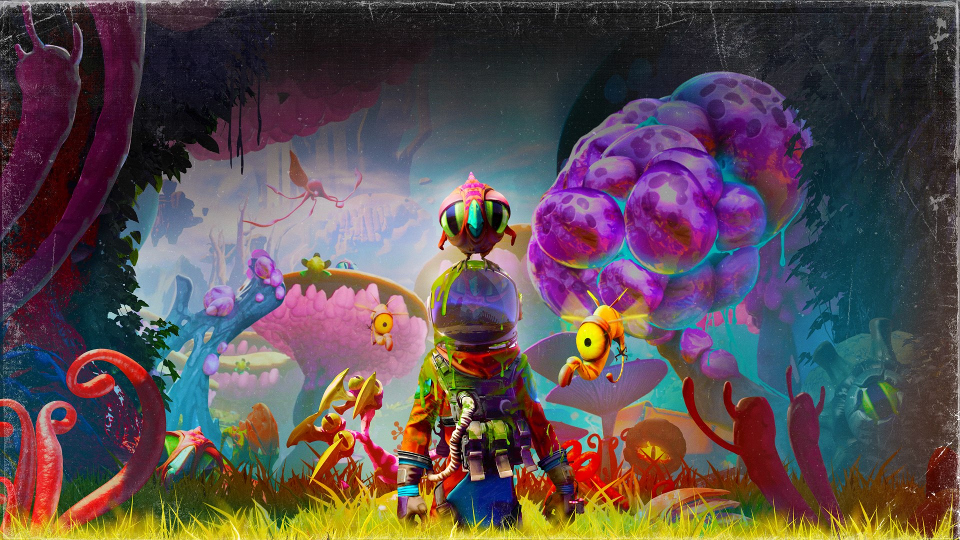 In Journey to the Savage Planet you play as a new recruit for Kindred Aerospace, the 4th best interstellar space exploration company. They’ve sent you off to an uncharted planet named AR-Y 26 to see if it might be fit for humans. Your mission is to explore and document what you find there.

With little experience and even less equipment you need to find and make use of the resources on AR-Y 26. After leaving your damaged Javelin spaceship you soon realise that this is a very different world to earth. Pressing Up on the D-Pad activates your scanner which is used to highlight and examine things of interest.

Watch the Journey to the Savage Planet launch trailer below:

Collecting resources is key to progressing so you need to be on the look out for veins of materials such as carbon and silicon. Resources that you collect can be deposited back at your ship and used to 3D print new items and upgrades. Another key element is identifying plants of interest and learning how to best make use of them. The many plants contain different seeds that can be used in a variety of ways. For example there’s some that are sticky, some that explode and others that can be used to help you climb.

As you progress you’ll also find a mix of alien creatures. Many of these are variations of incredibly cute Pufferbirds and most of them are friendly. Some are more aggressive and force you to use some of the different items you find in order to defeat them.

The only weapon you have available throughout the game is a blaster. This can be used to destroy certain breakable environmental objects such as crystals and grass. It can also be used to kill the various alien life and take on the few bosses the game throws at you. When you’re forced to fight with the blaster it can often be a frustrating and clumsy affair. Refreshingly though there isn’t a focus on combat in Journey to the Savage Planet.

The game is quite lenient when it comes to dying. Often you’ll slip off a ledge but you’ll be saved by your ship’s flying robot. If you fall too far onto a hard surface or take too much damage against an enemy then your ship with print another you. Like many other games if you make your way back to where you died you can grab all the stuff you were carrying. Here you can also bury your previous self too.

Most of your time is spent simply exploring the alien planet. It’s full of variety and many areas are split up into smaller islands and rely on verticality. The game definitely falls into the Metroidvania genre. Often you can see things that you need to obtain but they are out of your reach or require you to have access to a specific item or ability. There are neat audio cues that let you know when you’re closing in on a secret or collectible. If you don’t have the right upgrades then you’ll need to make a note and come back later. Upgrades include the ability to hold and use different seeds as well as jump and stomp thrusters. My favourite was probably the proton tether which is a kind of grapple hook.

The game demands a fair amount of backtracking but each area you discover has its own teleport that you can use to fast travel if you wish. I often found myself skipping fast travel so that I could explore more. The main reason for backtracking is to return to your Javelin.

Your Javelin features a large TV screen that plays video updates from your boss back home. These are always quirky and humourous and I genuinely looked forward to seeing the next one. The TV also plays a variety of fake adverts for crazy products which are well done and I found many of them hilarious. There’s also a lot of other neat touches in your Javelin which I won’t spoil here.

There’s a few different ways to beat the game. The most simple requires you to find five fuel sources around the world. A first playthrough of the game is going to take most players upwards of 10 hours. There’s plenty of reasons to come back though such as tracking down all the secrets and collectibles. There’s also a great photo mode and an “Old Game Minus” mode that gives you 3 lives.

Overall I absolutely loved my time with Journey to the Savage Planet. It’s a fun and compelling game that can be taken at your own pace both solo or co-op. It also caters to player who like to speedrun with an achievement for beating the game in under 4 hours. I’m already looking forward to the upcoming Hot Garbage expansion.

Journey to the Savage Planet was reviewed using a digital code provided by the publisher.

Advertisement. Scroll to continue reading.
In this article:505 Games, Journey to the Savage Planet, PC, PS4, Typhoon Studios, Xbox One