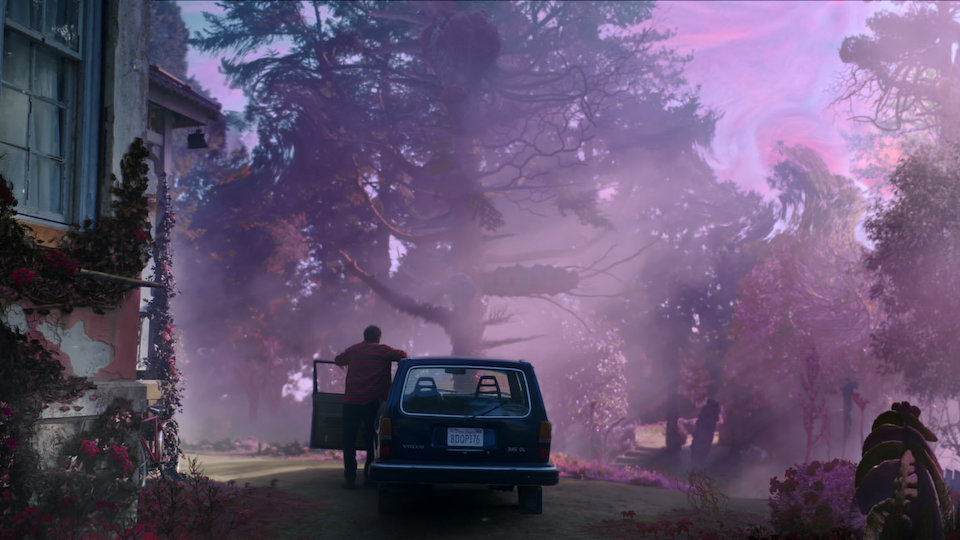 If you’re familiar with the past films of Richard Stanley, or if you’ve seen the terrific documentary Lost Soul: The Doomed Journey of Richard Stanley’s Island of Dr. Moreau (and if you haven’t, you really should) you will have some sort of idea about what to expect from his new film. But even then, nothing can quite prepare you for Color Out of Space. His first film in 27 years, adapted from the H.P. Lovecraft short story, Color Out of Space is an extraordinary blast of surreal cosmic horror from the mind of a filmmaker who may have opened one or two doors that can no longer be closed.

Nicolas Cage stars as Nathan Gardner, a family man who has moved from the big city to run an alpaca farm in the countryside. If that sentence doesn’t make you want to watch this film then nothing will. His wife Theresa (Joely Richardson) is recovering from cancer surgery. His daughter Lavinia (Madeleine Arthur) is secretly practicing Wicca rituals to try and help her mother, and his son Benny (Brendan Meyer) is just hanging around and smoking weed every day.

Nathan just wants a peaceful life, but this is disrupted by small meteor crashing into his farm. The meteor infects the soil, poisons the water, and releases strange toxins into the air. At first this all manifests in visions of a “color” – a vibrant magenta, swirling and distorting reality around them. Then nature begins to change, with strange, brightly coloured vegetation and insect life growing from the crater. Then it begins to affect the family, slowly plunging them into a hallucinogenic nightmare.

For the first hour of the film, Color Out of Space moves at a very relaxed pace, gently embracing you with familiarity and humour. Then it goes absolutely bat-shit crazy, blasting your senses with some truly unsettling sights and sounds. Nic Cage’s performance mirrors this, as he mostly reigns it in during the first half of the film, before letting loose in that idiosyncratic Nic Cage way.

Color Out of Space is a film of vast ideas, touching on evolution and transformation, and exploring our relationship with nature, technology, time, the cosmos, and the supernatural. As the toxins from the meteor infect the family, altering their behaviour and state of mind, the film also exposes the fragility of the social structures we build around ourselves, and how easily they crumble when faced with something new that we don’t understand.

Does all of this come together though? Not really would be the honest answer. For all its startling ambition and kaleidoscope of ideas, there’s almost too much happening here for any of it to land. It is an absolute trip however. A wild and psychedelic ride, featuring some astonishing and stomach-churning body horror. Color Out of Space is as unconventional as sci-fi horror gets, and it doesn’t hold back in any way. For that alone, it is most definitely worth watching.