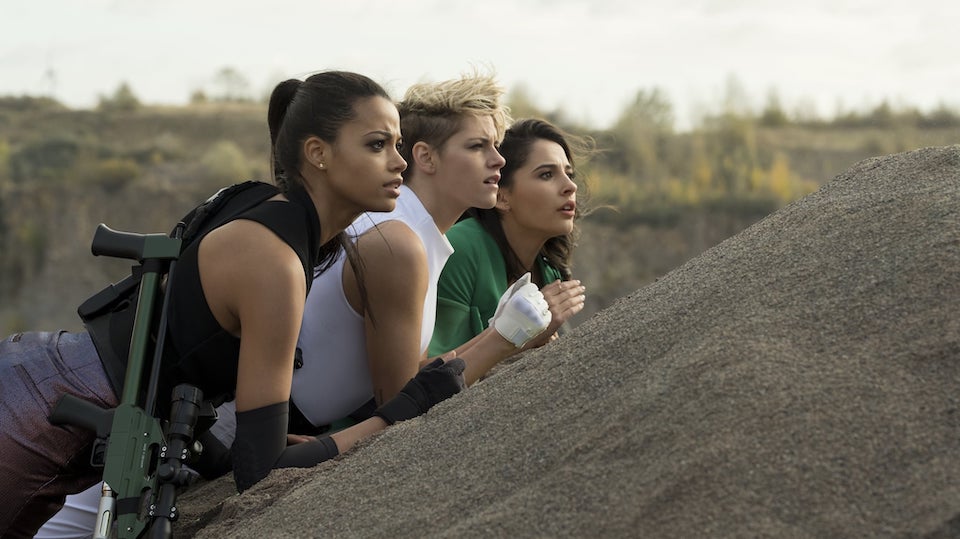 After a fairly bruising theatrical run, featuring mixed reviews and a few rather unkind headlines from its opening weekend, Charlie’s Angels arrives on Blu-ray and DVD this week, hoping to find the audience that sadly wasn’t quite there for it when it hit cinemas late last year. Written and directed by Elizabeth Banks, this continuation of the franchise looks to make the Angels relevant again and bring them fully into the 21st century.

The plot revolves around your typical spy movie maguffin, which in this case is a device developed to provide sustainable, renewable clean energy for the whole world. Unfortunately, one of the lead engineers on this project, Elena Houghlin (Naomi Scott) has discovered that if it falls into the wrong hands, it could be reprogrammed with deadly consequences. When it inevitably falls into the hands of someone with deadly intentions, Elena is recruited by the Townsend Agency to track it down.

This sees her team up with Sabina (Kristen Stewart) and Jane (Ella Balinska) on a globe-trotting mission, via a few of the usual European hot-spots. It’s fun and light, and Banks has made a terrific decision not to go dark and gritty as so many franchise reboots do in order to try and seem relevant. The action scenes – from a thrilling car chase through Hamburg, to a brutal fight scene in a warehouse – are slick and exciting, without ever being too flashy. These Angels aren’t the ‘Matrix’ style superheroes of the McG movies. In a very nice touch by Banks, they might not be stronger than the goons they end up fighting, but they are always smarter.

Where it falls down is the script. A lot of the dialogue is clunky and leaden, and as a result most of the jokes fall flat. Stewart, Balinska and Scott work their socks off to bring some spark and some chemistry, but the script keeps getting in the way. The worst addition to the film by far is an awful opening credit montage that lays on the girl power element with all the subtlety of a shovel to the face.

There is a contradiction at the heart of Charlie’s Angels in that it comes off feeling a bit safe, when on paper this is anything but. No one was clamouring for a reboot of this franchise. The 2000 iteration was chock full of A-list star power and bolstered by huge marketing. It was everywhere – a proper massive pop culture event. This version on the other hand was hardly marketed at all – I can barely remember seeing a trailer for it on TV – and casting wise it has gone for actors in the main roles who won’t be familiar faces to most cinema-goers.

That is of course apart from Kristen Stewart who is a huge star thanks to her past involvement in the Twilight franchise. But since then she is mostly known for risky dramatic roles and challenging, obscure indies. Her involvement in this film is by far its most fascinating element. It’s very much counterintuitive casting to see this awkward, darling of indie auteurs, kicking ass and cracking wise. It shouldn’t work, but it kinda does.

Overall this is an enjoyable film. In terms of plot and action it doesn’t do anything revolutionary, but in updating the gender politics of this franchise, the film has a freshness and modernity, compared with the leering gaze of the McG films which already feel like relics from a different time. If you’re in the mood for something fun and feelgood to pass the time of day, you could do far worse than Charlie’s Angels.

The Blu-ray release comes with an impressive selection of special features. There are 5-minutes of deleted and extended scenes, and a short gag reel, which like all gag reels is never as funny to us as it is to the actors fluffing their lines.

Stronger Together: The Sisterhood of Angels is a 7-minute featurette focusing on the main characters and the actors portraying them. There’s plenty of behind the scenes footage and interviews with the main cast and crew. Elizabeth Bank as BOSSley is a short piece about the quadruple threat writer / director / producer / actor who has brought the franchise back.

Warriors on Set: Angels in Action is a 5-minute featurette about the action and stunt pieces. There’s lots of great training footage included here, and insight into how the fighting styles were developed to reflect the characters and be as realistic as possible.

Tailored for Danger: Styling the Angels is a 6-minute clip focused on the terrific costume design by Kym Barrett, and the impressive work done by the hair and makeup department. Finally on the disc is the music video for ‘Don’t Call Me Angel’ by Ariana Grande, Miley Cyrus, and Lana Del Rey. It’s no ‘Independent Women’.