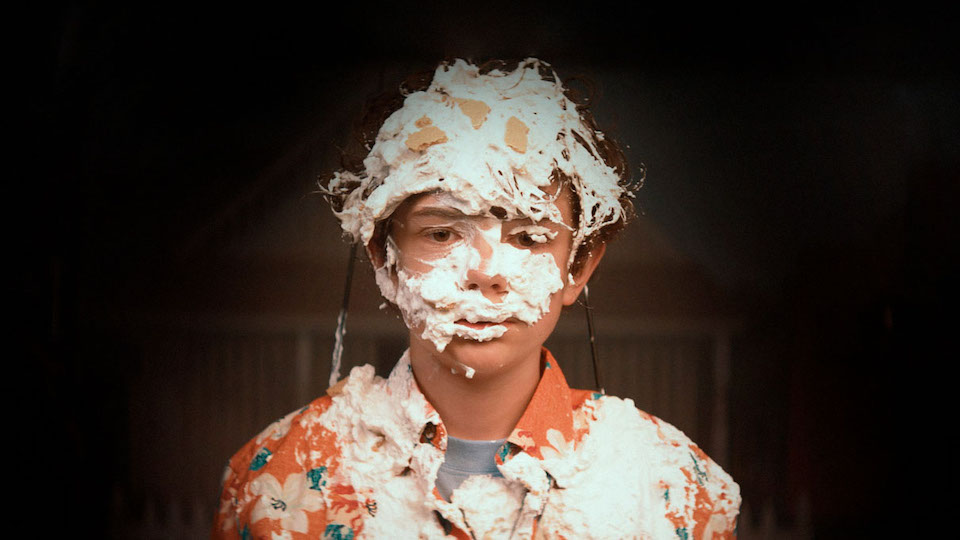 Part autobiographical drama, part cinematic therapy, Honey Boy directed by documentary filmmaker Alma Har’el and written by Shia LaBeouf (based on his own life) is a film that goes some way to making sense of the self-destructive actor, and the strange and dangerous journey his career has taken. LaBeouf was encouraged to write the script as part of his therapy whilst in rehab, and the film explores his complex relationship with his father.

The script changes the names of the characters, but this is undoubtedly Shia’s story. A terrific opening montage plunges us headfirst into the chaos of Otis Lort’s life. Otis (played by Lucas Hedges) is a young Hollywood star, going from one blockbuster movie to the next, partying way too hard, and trying to numb his pain with alcohol. A drink driving arrest followed by a violent altercation with police sees him ordered to attend rehab or go to prison. His therapist (Laura San Giacomo) suggests he reconnects with his past, and so he begins writing his story.

Har’el then splits the narrative, as we flashback ten years to the early days of Otis’s career, as a bit part player in TV shows. Now played by the terrific young actor Noah Jupe, we catch up with him living in a seedy motel on the outskirts of Hollywood with his dad James, who in a meta piece of casting is played by Shia LaBeouf. James is an alcoholic ex rodeo clown, determined to see his boy become a star, regardless of the pressure and emotional abuse he puts on Otis to succeed.

LaBeouf’s script pulls no punches in depicting the often painful and neglectful circumstances of Otis’s life. For all of James’s support and encouragement, there’s a barely concealed anger underneath it all, fuelled by his own bitter jealousy and regret. It’s an extraordinary thing to witness – an actor physically and mentally abusing a younger version of themselves – but it gives the film a unique emotional heft. What other actor would have the courage to open lay himself bare like this? It is without doubt a career best performance from LaBeouf.

In Alma Har’el, LaBeouf has found a perfect collaborator. Her storytelling sensibilities and fluid style bring something distinct to each timeline. The Lucas Hedges timeline has a more classical style, bathed in a gorgeous magic hour glow, whilst the Noah Jupe timeline is more immediate and evocative, but with a dreamlike quality, in keeping with the abstract nature of memory.

Honey Boy is a heartbreakingly honest and tragic film, unlike anything you are ever likely to see again. Both a poetic eulogy to his youth, and a raging howl at the man who raised him, but LaBoeuf’s script also has a few interesting things to say about Hollywood. Specifically that weird family dynamic where the parents of child stars essentially become their employees, and also the psychological toll it takes when you have a job that requires you to mine for personal trauma. No wonder Daniel Day-Lewis used to take years off between movies.

The disc comes with four short featurettes, which are disappointingly repetitive. Directing Honey Boy is an interview with Alma Har’el discussing the style and themes of Honey Boy, and her personal vision for the film. The Making of Honey Boy repeats a lot from Har’el’s interview, but also features some interview footage with Shia LaBoeuf. Shia’s Story is another short clip, going a bit deeper into the complex relationship between Shia and his father. Finally, there are some clips from the promo press tour.

Honey Boy is available to download and keep from 30th March, and on Blu-ray (HMV exclusive) from 13th April