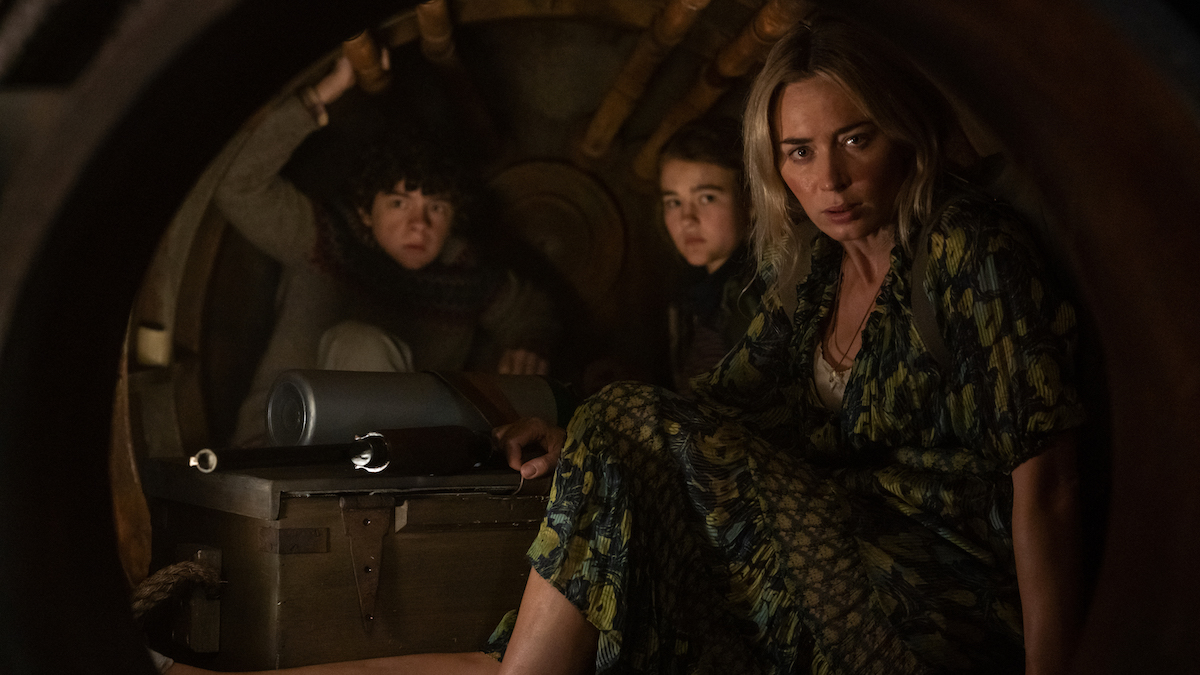 Writer-director John Krasinski wastes not a single frame in this slick and stripped back thrill-fest follow up to his 2018 horror smash ‘A Quiet Place’. The action kicks off this time with a flashback to the day the invasion happened. Lee (Krasinski) and Evelyn (Emily Blunt) are with their kids at a little league game. We meet Lee’s friend Emmett (Cillian Murphy) who is also at the game with his kids. Without warning the world changes around them, as the screeching extra-terrestrial beasts begin their invasion of Earth. It is an absolutely breathless and barnstorming sequence. With humans not yet armed with the knowledge that they need to be quiet, it is a slaughter.

After getting your pulse racing with this exhilarating opening, Krasinski then takes us right back to where he left things in first film. Lee is dead, the house is burning down, and Evelyn, Regan (Millicent Simmonds) and Marcus (Noah Jupe) have discovered they can use Regan’s cochlear implants to create a high frequency noise that can weaken the creatures enough to kill them.

With the newborn baby in tow, they must now quietly and carefully flee their beloved and safe home in the hope of finding refuge elsewhere. The family chance across Emmett, living in the bowels of an abandoned factory. Here, Regan discovers there may be a community of survivors that they should try to connect with, but Emmett warns that in true post-apocalyptic style, the people out there have gone bad.

Krasinski makes some brave decisions at this point which haven’t been universally popular with viewers. Firstly, he shifts focus to Regan, who sneaks off to find other survivors. No problem there. But instead of Evelyn going to find her, she is sidelined in favour of Emmett. Fans of Emily Blunt will be extremely disappointed by her relative lack of screen time, but ultimately she is a victim of the rules you have to follow to survive in this world. She has a baby that needs to be subdued in order to keep the creatures at bay. She can’t exactly strap it to her chest and go monster hunting. As cool as that would be.

‘A Quiet Place Part II’ leans more towards action beats than the contained, muted horror of the first film. It is a ruthlessly efficient piece of filmmaking, though this is nearly to its detriment. As noted above, certain characters are sidelined, and Krasinski—in one of the films boldest moves—decides to not even bother with a final act. The abrupt conclusion certainly suggests there’ll be A Quiet Place Part III somewhere down the line.

Millicent Simmonds is once again terrific at the heart of the film, and Cillian Murphy is an excellent, brooding addition to the cast. The broadening of the scope won’t appeal to those who are looking for more of that self-contained claustrophobic horror delivered in the first film, but it really worked for me. The film is incredibly effective, as yet another exercise in excruciating tension and expertly crafted set pieces. Keep your eye on the trades…if he wants it, John Krasinski will be getting a huge directing gig very soon.

The disc comes with a decent bundle of bonus content, starting with ‘Director’s Diary: Filming with John Krasinski’ which is a ten-minute featurette going behind the scenes with the director. He talks us through some of the key scenes and complicated shots in the film, highlighting the terrific practical stunt work in ‘A Quiet Place Part II’.

‘Pulling Back the Curtain’ is a typical media junket clip featuring interviews with all the main cast and crew, intercut with footage from the film. ‘Regan’s Journey’ is an interview with Millicent Simmonds and other members of the cast, focusing on Regan becoming the central character, and the role she has to now take on in order to protect her family.

‘Surviving the Marina’ is a short clip which takes us behind the scenes of the film’s most horror-tinged element, when Regan and Emmett encounter the feral mob of survivor. ‘Detectable Disturbance: Visual Effects and Sound Design’ is a featurette with interviews with the key VFX artists, animators, and sound designers discussing the excellent work they did on the film.