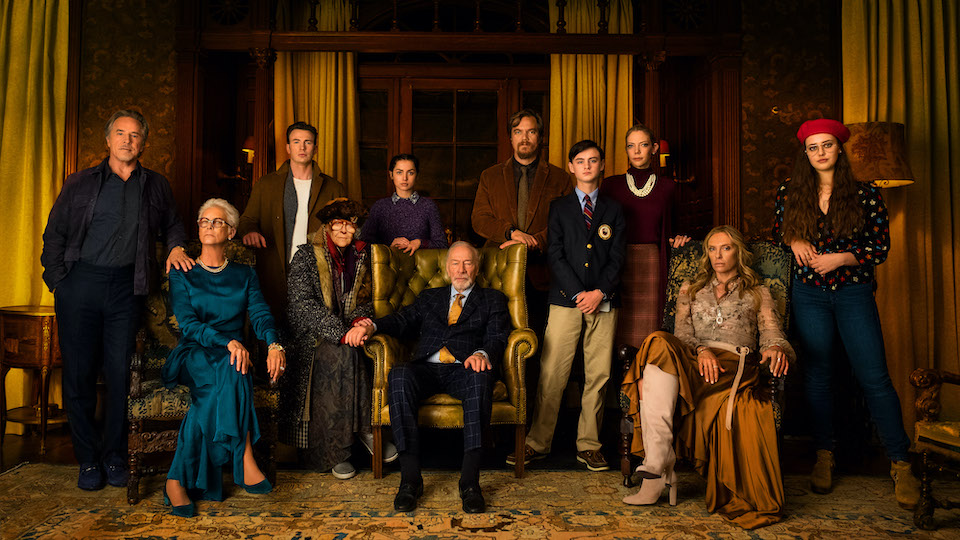 Writer-director Rian Johnson is back from his journey to a galaxy far far away, and has returned with Knives Out, a fiendishly well written and expertly directed murder mystery. Johnson has always publicly claimed that making The Last Jedi (the best of the Disney era films by far) was nothing but a positive experience, but the howling backlash from a very vocal minority (amplified by the virality of social media) must have surely left some scars. Knives Out, with its small scale, tightly contained production, and cheeky title does in some way feel like something of a palate cleanser. There’s also something utterly delicious about one of the characters being an alt-right internet troll.

This very modern murder mystery – though crucially set in a creaky old mansion that Agatha Christie would approve of – is concerned with the death of the famous thriller writer Harlan Thrombey (Christopher Plummer). Each of his venal, money-grabbing children (and their spouses / children) had a reason to off the old man, but the police think it is an open-shut suicide. Gentlemen sleuth Benoit Blanc (Daniel Craig) however, suspects foul play.

Knives Out is an absolute blast of a film, and much of that enjoyment comes from Johnson’s A-list cast who are clearly having a ball. Daniel Craig’s southern fried detective is a glorious creation, occasionally verging on ridiculous, but hilarious and endlessly quotable. Chris Evans puts down his shield and picks up a rather fetching sweater as Ransom, the over-privileged black sheep of the Thrombey clan. Toni Collette is fantastic as Joni, the lifestyle guru / social media influencer with more than a hint of Gwyneth Paltrow about her.

Everywhere you look in Knives Out there is a memorable turn, whether it be Jamie Lee Curtis as the eldest Thrombey child, Don Johnson as her feckless and slightly right-wing husband, or the brilliant Michael Shannon who gets one of the film’s best lines in the middle of a screaming match between the family. The secret weapon of the film however, is that Johnson frames the entire story from the perspective of Marta (a sensational Ana De Armas), Harlan Thrombey’s nurse.

By gently subverting the conventions of the genre, but without ever straying too far outside the lines, Johnson manages something bold and wholly original, whilst slyly commenting on modern America. There are two very funny running gags that none of the family actually know where Marta is from, and that they all secretly wanted her to be at the funeral but were out-voted.

All of this plays out in visually sumptuous style. The production design by David Crank, costumes by Jenny Eagen, and art direction by Jeremy Woodward are all stunning. The house is a gothic delight, filled with knives, skulls, and ominous paintings. Keep your eyes on the portrait of Harlan, looming over proceedings.

But the star turn here is Rian Johnson. His fantastically witty and wordy script gives you all the clues you need, but it won’t be until subsequent viewings that you see it all come together. Even then when you know what is coming, it is enormously fun to witness this perfectly calibrated machine work its magic. Bring on the next Benoit Blanc mystery.

For those of you who enjoy special features, you’ll be delighted with the selection to be found on this Blu-ray disc. There are two feature length commentaries, one with Rian Johnson on his own, and another where he is joined by director of photography Steve Yedlin and actor Noah Segan. There are also two deleted scenes with optional audio commentary from Johnson.

There’s a director and cast Q&A from a Screen Actors Guild screening in 2019 hosted by Jenelle Riley. Meet the Thrombey’s viral ads are couple of fantastic little clips advertising the business interests of the main characters. Joni’s lifestyle brand advert is particularly funny.

Making a Murder is the main event of the special features – a superb, feature length, in-depth behind the scenes documentary, tracking the film all the way through its development and production. Finally there is Rian Johnson: Planning the Perfect Murder. This is a short interview with the writer/director discussing how he structurally developed the film, aiming for a Hitchcock style thriller inside the framework of a whodunnit. You know what, he nailed it.